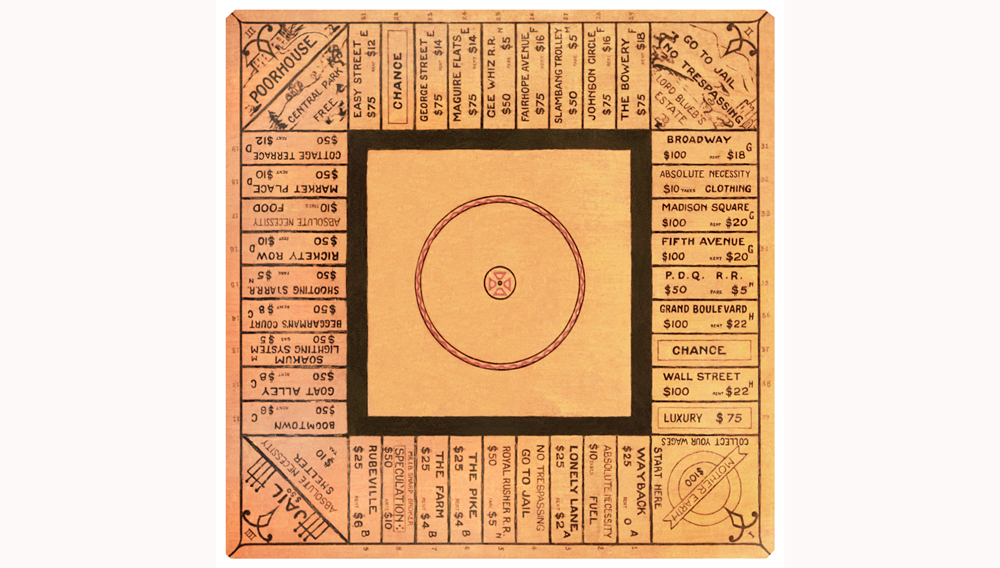 With more than 275 million game sets sold in the past century, Monopoly is the most popular board game in history. It is available in 111 countries, translated into more than 40 languages, and made in countless special editions, including a $2 million 18-karat gold edition by jeweler Sidney Mobell.

But despite the billions of times the world has passed Go, it turns out we never really knew Monopoly at all. This year, journalist Mary Pilon’s book, The Monopolists: Obsession, Fury, and the Scandal Behind the World’s Favorite Board Game (Bloomsbury, $27), debunked the long-told story of the game’s invention—an inspiring tale of an out-of-work salesman, Charles B. Darrow, creating the game in the Great Depression and thus earning a fortune. In reality, Elizabeth (Lizzie) Magie, a follower of economist Henry George, invented the Landlord’s Game as a teaching tool against monopolism in 1902, roughly three decades before Darrow sold the successor, Monopoly, to Parker Brothers. “Her story was buried,” says Pilon, who stumbled upon it while reporting on the Great Recession. “During her era, it was a kind of rebellious, progressive teaching tool. Then in the Great Depression, it became associated with having things that most people at the time didn’t have. I don’t think it was a coincidence that that’s how the game really took off commercially.”

First editions of the Darrow game remain the most coveted and collectible, such as the circa-1933 round Monopoly set handmade by Darrow, which was purchased by the Strong’s National Museum of Play in Rochester, N.Y., for a record $146,500 in 2010.

Thomas Forsyth, a Portland, Ore.–based game historian, began to research Monopoly after discovering his grandfather’s 1906 edition of Magie’s board game—one of just three known pre–Parker Brothers sets—at a Thanksgiving gathering. “I opened it up and saw it had four railroad spaces, Go to Jail, Chance, and houses and properties, but it said ‘The Landlord’s Game’ with a 1904 patent,” he recalls. “These little red flags went up and that started the little bug in me.”

Forsyth, who now owns the trademark to the Landlord’s Game, plans to unveil a limited-edition replica of the original set and is accepting preorders online at landlordsgame.info. He wants to share the relic with other collectors and, at last, give Magie the legacy she deserved.