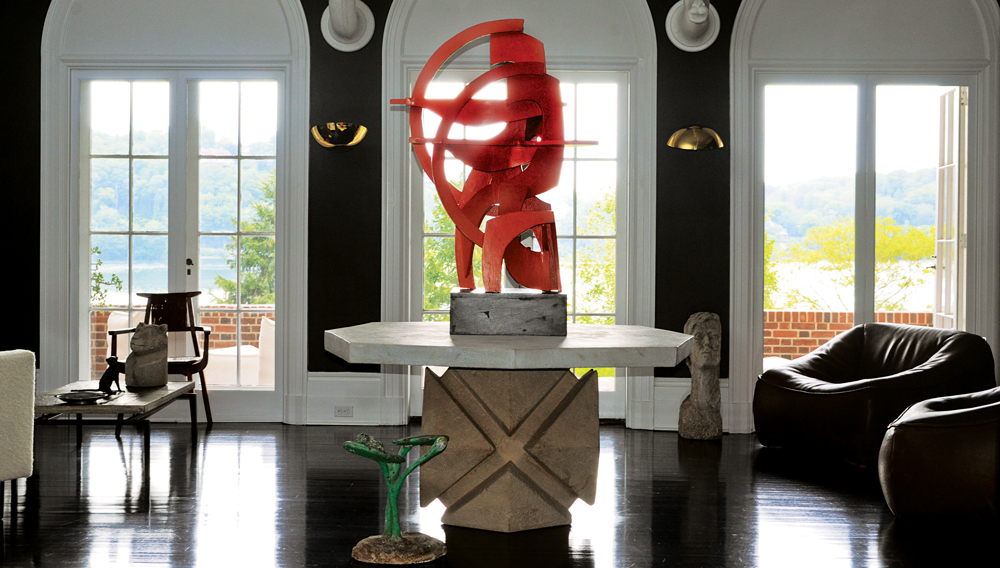 Michael Bruno, the founder of 1stdibs, has a passionate approach to the art of collecting.

Michael Bruno has always had an eye for great design and a knack for thinking big. His love of architecture and grand old houses led him to obtain a real estate license when he was 19, and after a lucrative career as a broker for Sotheby’s, he moved to Paris. One day he was shopping for antiques at the Marché aux Puces when he was struck with an ingenious idea: Why not put the famed flea market online, and make all these amazing finds available to the world? It would be a first, a virtual marketplace for high-end, one-of-a-kind items.

In 2001, Bruno turned his pioneering vision into a reality when he founded 1stdibs. Over the next decade, the site would expand its reach worldwide and revolutionize the way luxury goods are bought and sold. By 2014, it had logged more than $1 billion in transactions and become the premier online source for antiques, fine art, furniture, estate jewelry, and vintage couture—“a place,” as Bruno has described it, “where collections are born.”

Naturally, Bruno is also an enthusiastic collector—of antique and vintage furnishings, as well as noteworthy real estate. We spoke with him about the art of assembling a great collection, shopping in the digital age, and trends in luxury buying. Now 51, he has relinquished his role as CEO of 1stdibs to focus on a new project, an app called Housepad whose functions include managing all that stuff collectors tend to accumulate.

Are there risks in buying collectibles online?

You have to make sure you read the fine print, so that you know the condition of the piece, whether there’s a no-return policy, and what the dimensions are. Sometimes people just look at the image and go for it. I’ve done that myself. I was buying an antique dining table and chairs­—from two different dealers­—that I just knew would be so perfect together. But I didn’t bother to check the actual size of the chairs; I thought dining chairs were dining chairs. And you know what arrived? Sweet little children’s chairs!

Any other advice for collectors?

Keep an open mind—that’s an essential aspect of collecting. Here’s an example of that. I was sure I wanted a round center table—dark wood, single pedestal—for the gallery in my main house. So I started searching the site and there were quite a few good choices. But then I saw this irregular, light-colored limestone table and I thought, Whoa! Wait! That’s much more striking. If you see something and think whoa—pay attention. Don’t ignore that instant gut reaction. I would add this, too: If you see something you love and it’s special, don’t hesitate to buy it. Great things do sell fast and you may never see it again. I happened upon a ’20s display cabinet embellished with fish motifs that I fell in love with, and when I heard the price—$18,000—my jaw dropped. But I said to myself, when will I ever see that again? And you know what? It’s one of the things I own that will be going out after I do.

Is going with your gut the best way to build a collection?

It is for me. I buy what I love, and it doesn’t have to be the best of anything. It just has to appeal to me. I feel a collection should unfold, should be a natural, organic process rather than a deliberate one. I’m a passion collector. But there’s another type, and that’s the studied collector who approaches acquisitions like stocks—investments that will appreciate in time. Studied collectors have a more precise, strict point of view. They want a specific thing and they’re only going to collect the best examples of someone’s work. I wouldn’t find that nearly as much fun as collecting out of pure passion, but I’m sure it’s far more rewarding financially.

What is your greatest collecting passion?

I’m a real estate junkie, an incurable collector of property. And that’s a tricky thing to collect, because you can only have so many at one time.

I’m particularly drawn to old houses that need renovation. When I was in my early 20s, I was working as a real estate broker in La Jolla [Calif.], and I bought a 1920s Mediterranean-style villa by William Templeton Johnson that was in danger of being torn down. That fired up my passion for restoration and preservation. If I have a chance to buy a historic property by a notable architect in a prime location, then I sort of go into studied-collector mode because I know I’ve really got something.

Tell us about your real estate portfolio.

At the moment I have two 14,000-square-foot brick houses in New York. One is in Southampton, and it isn’t old but it has a glorious 40-acre meadow view. The other is in Tuxedo Park, a gated enclave about an hour from Manhattan that’s known for its Gilded Age mansions. The main house was designed in 1900 by John Russell Pope. It sits on 20 acres overlooking the lake, and there’s a guesthouse and a boathouse as well. Behind the property is a 55-acre garden—well, a park, really—that I just bought, designed by the Central Park landscape architect, Frederick Law Olmsted. Paths, brooks, a waterfall, just gorgeous. And I own three other buildings in Tuxedo Park. I recently bought the Loomis Laboratory, a spectacular 1901 stone castle that originally belonged to Spencer Trask, the financier who founded Yaddo, the artists’ retreat in Saratoga Springs. Trask then sold it in the ’20s to Alfred Lee Loomis, a Wall Street tycoon with an interest in science who turned it into a private lab. It’s a dream—I haven’t been so excited about a piece of real estate in a long time. I’m going to convert the entry, living room, and gallery into one big space and use it as an office. I also have two old commercial buildings in the village, and I’ve made an offer on another, a James Brown Lord carriage house that I want so badly, I can hardly stand it.

Oh, sure. I’ve got to have something interesting to fill all these spaces. What I have more than anything are animal-themed objects, well over 100. They’re scattered everywhere in my houses, all kinds of species—a 5-foot-tall Italian rooster, a German cookie jar that looks like a bear, 18th-century ceramic parrots, iron horse heads, plaster camel heads, resin tusks, chandeliers made of shed antlers, a stone elephant . . . I could go on and on.

What is that all about?

I’ve always had an affinity for animals, and I like to feel connected to nature. I’ve even got a collection of wooden mushroom sculptures. All these pieces just make me smile. They’re happy objects and they uplift the rooms, make them fun; otherwise my interiors might feel pretty stiff. I like to move my smaller objects around from time to time, change the tablescapes. My displays will be static for a while, but often with a new season, a weather change, I want a different look or a new mood. Lately I’ve been buying pinball machines, which are in my guesthouse. I like lighthearted things that are a little bit nostalgic. They give me a lot of pleasure.

What is trending now in the luxury sector?

Limited-edition contemporary furniture design is very hot—spectacular museum-quality pieces that sell at incredibly high prices to collectors, like fine art. The influential Australian industrial designer Marc Newson has created everything from furniture to cars to yachts and aircraft for some of the most prestigious clients in the world. His Lockheed Lounge, an aluminum-and-fiberglass chaise, is the most expensive object ever sold by a living designer—it went for $3.7 million in April of this year at a Phillips auction in London. Joseph Walsh, a self-taught Irish designer, creates sinuous free-form compositions inspired by nature that are in many significant private collections and museums. And the Dutch designer Joris Laarman uses digital technology as a tool for his works—his sensational Bone Chair is in the permanent collection of MoMA. David Ebner, an American master woodworker, makes extraordinary sculptural studio crafts furniture. The Campana Brothers, from Brazil, are known for making cutting-edge furniture out of ordinary materials such as cardboard and scraps of wood, and some of them sell for tens of thousands of dollars.

What is on the downswing?

I think midcentury modern has really kind of peaked. That pared-down look of the ’40s, ’50s, and ’60s has run its course. Not that the best of the furniture isn’t beautiful in its clean-lined simplicity, but because it is so simple, the original designs have been copied too much by companies like Ikea. And I think there’s been a movement toward more luxurious materials.

Furnishings from the ’70s have been in vogue for a while now. I’ve always liked that period. That’s when designers began to use a lot of chrome, suede, leather, smoked mirror, faux tortoise—materials that weren’t used in midcentury design. I have a few ’70s pieces, including a pair of sofas by Milo Baughman and a kitchen table by Jules Wabbes.

Can a collection get out of hand?

Oh, yeah. As a matter of fact, if I get that carriage house in Tuxedo Park I’ll have to say, “No more!”

If there is one thing Michael Bruno insists on, it is a beautifully maintained home. But when he became frustrated with the “convoluted mess” of managing the multiple properties that make up his real estate collection, he dreamed up a solution: a new app called Housepad. Introduced earlier this year, the app functions as a private communication network connecting homeowners to staff, family members, guests, and anyone else involved with the house, including interior designers, architects, contractors, and gardeners.

Images are the foundation of the app. For example, a “lookbook” stores photos of rooms or specific areas to show housekeepers exactly the way things should be—how the pillows should be arranged on the sofa, the beds made, the towels folded. Users can assign to-dos by sending existing images or snapping new ones, accompanied by a note.

Housepad also can be used to compile a comprehensive inventory of the user’s belongings. “That’s a particularly valuable feature for collectors,” says Bruno. “You can shoot every single item and create a corresponding digital record of invoices, warranties, serial numbers, care instructions, where you bought it, who the designer is, the provenance.”

Other features organize emergency information, create a master list of the products used in the home, control Nest thermostat temperatures, and book repair services and cleaners from handy.com.