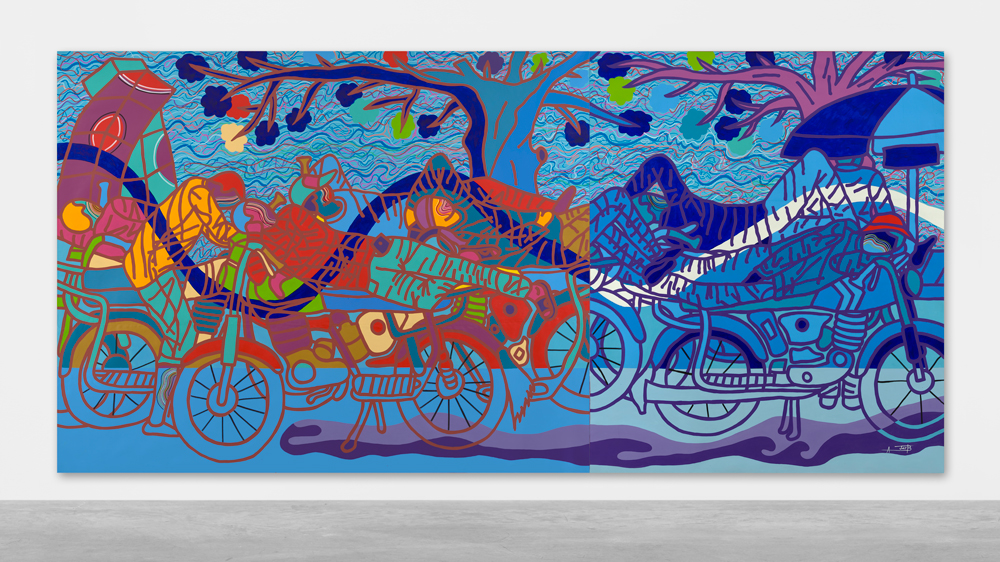 Photo: Courtesy of the artist and Peres Projects, Berlin

Ajarb Bernard Ategwa’s brightly hued acrylic on canvas, Sweet Dreams #2 (2018) is one of the standout works being offered at Expo Chicago, the seventh edition of which runs September 27 through 30 in the Windy City. This year’s event will welcome 135 galleries from 27 countries, among them Berlin-based gallerist Javier Peres, who says of Ategwa, “The artist’s distinct style of modified figurative painting, based on Cameroonian pop culture, is focused on the day-to-day realities of a bustling African metropolis. By using imagery lifted directly from present-day Cameroon, Ategwa’s work counters preconceptions and stereotypes many in the West hold about the African experience with a nuanced perspective.”

Fair veterans David Zwirner, Kavi Gupta, Jessica Silverman, and Luhring Augustine will be joined this year by Gavin Brown’s Enterprise, Gallery Hyundai, and Mendes Wood DM. “This is lucky number seven for us, and there is significant momentum for Expo Chicago as we have a strong list of leading international galleries in place along with critically acclaimed programming, strategic exhibition alignments, numerous global partnerships, and curatorial forums designed to welcome the international art world,” says fair director and president Tony Karman.

Among the highlights is Medicine Ball (2018), a work by conceptual artist Sherrie Levine, which is being presented by David Zwirner, who has galleries in New York, London, and Hong Kong, and Matthew Ritchie’s mixed-media work The Black Arrow (2014-2017), which is available from New York gallerist James Cohan. Also of note is David Wojnarowicz’s gelatin silver print, Arthur Rimbaud in New York (Palm Reading) (1978-79). Executed in an edition of three, it is being offered by New York-based P.P.O.W. gallery.

“Chicago, says Karman, “is fully engaged, and very few art fairs in the world produce the amount of on and off-site programming that we do.  Put simply, if you are a collector, curator, art advisor, or art enthusiast, Chicago is definitely the place to be this September.”