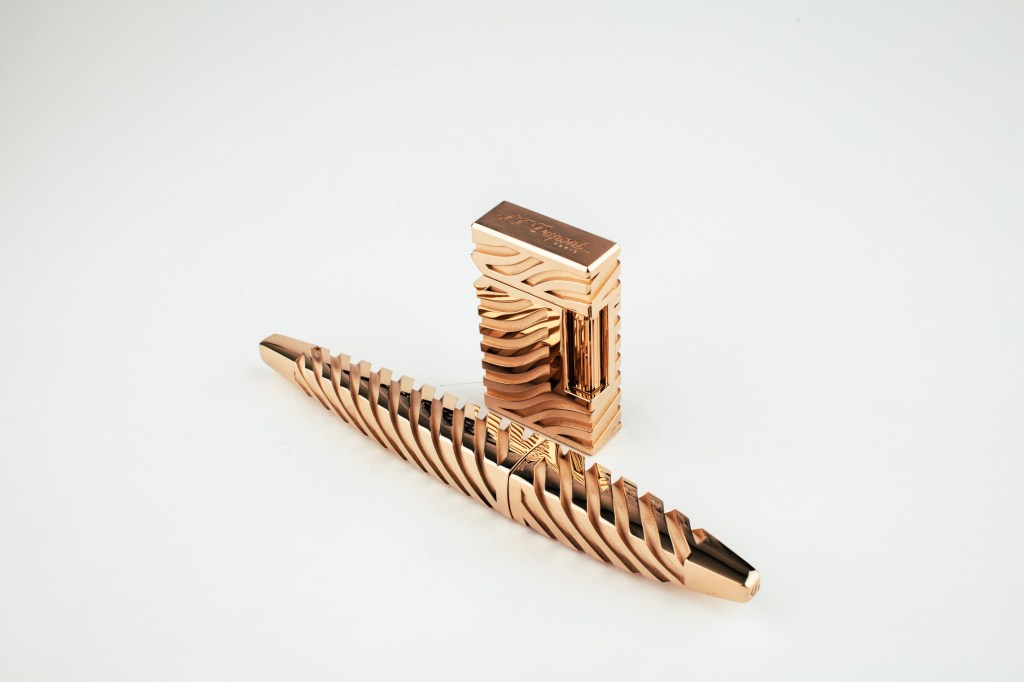 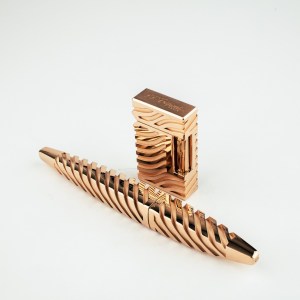 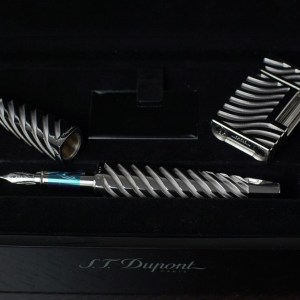 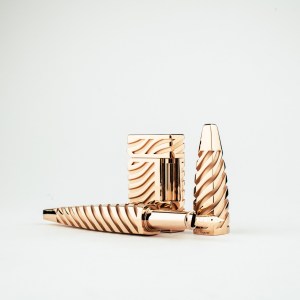 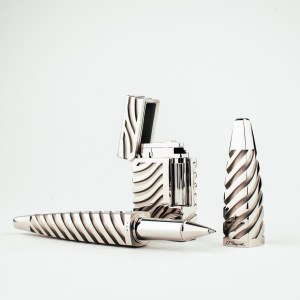 S.T. Dupont and Metaxas & Sins have collaborated on a special edition pen and lighter set for their “Haute Creation” using a very distinct and technically challenging design.

The S.T. Dupont “HELIX” is a radical departure from the work of other artists featured in S.T. Dupont collection  including  Picasso,  Warhol, and Lagerfeld.

According to designer Kostas Metaxas ” The main idea was to use geometric patterns and shapes that could never be considered for pen manufacturing since pens are traditionally machined on a spinning lathe and hence, shapes are limited to “tubes”. I wanted to break free from this and create a very personal sculpture that could also be used as a writing instrument.”

“A fountain pen is one of those rare objects. It connects with us on so many levels. In our most creative mode, it is an extension of our mind which through gestures of our hand convert random thoughts into intelligible concepts, ideas or expressions.  Every time we use a writing instrument – we write code. Sometimes people understand it.  Sometimes  there are layers in the meaning of the words we write. Often, we give away more in the style and stroke of our writing than in the actual words themselves.

In many cultures, the written letter and word is “art”.

“I take every opportunity to infuse art into everyday objects. With pens it’s even more tactile sensual and very personal”

Helix is limited to a collection of 300 individually numbered pieces.

Meet Mr. Kostas Metaxas, an award winning artist-designer , a Luxury-Lifestyle Magazine Editor/Publisher, and a Filmmaker/Broadcast Producer who covers fashion, design, gastronomy and the arts with over 1000 documentary interviews and two awarded feature films to his credit.

According to Metaxas: “I love to get lost in music and explore the universe around me through music. In my youth, whilst creating electronic instruments to faithfully reproduce music, I started to realize that musical truth or artistic truth – transcends.

The first 20 years of my commercial life, in a very monastic way, I dedicated myself to this truth – to be able to capture the essence and spirit of a great musician’s playing and share the emotion of his message. To truly communicate it to others.

This is how I approach art. Communicate the truth, the beauty and the essence of the message or “code” instilled in all great objects.

This code speaks to us. It liberate us from the everyday and connect us to the beyond.

In 2016, S.T.Dupont is celebrating 144 years of prestige and exclusivity. A chance to look back over a rich, fascinating story, crossing three centuries and featuring some of the most illustrious personalities of their day.

Simon Tissot Dupont, or the destiny of a visionary trunk-maker

The story begins with a man of exceptional destiny: Simon Tissot Dupont. A carpenter’s son, he became photographer to Napoleon III. At the age of 25, Simon understood the wanderlust of his time and in 1872 created a luggage and leather goods workshop, which then began to produce a steady stream of exceptional products for the highest social circles. His vision was the Art of Travel, accompanied by trunks and travel case personalized in every detail.

Emperor Napoleon III and Empress Eugénie were among his first customers, quickly followed by the European elite. It soon became essential to travel with S.T.Dupont luggage. People loved the fine skins and perfect finishings; they marvelled at the workshop’s manufacturing secrets, such as its famous leather tanned with diamond powder, an exclusive technique that resulted in peerless brilliance, depth and strength.

S.T.Dupont’s reputation continued to grow during the 20th century. It opened workshops at the family’s home town of Faverges in the French Alps. It called on seventeen different crafts, including leathermaking, goldsmithing, varnishing, gilding, polishing, plating, setting, tailoring and glassmaking, daily scaling the heights of perfection. The name of S.T.Dupont travelled the world as the inseparable companion of the European aristocracy and such famous names as Rockefeller, Agnelli, Churchill, Coco Chanel, Guccio Gucci and Louis Renault.

S.T.Dupont began as official trunk-maker to the Second Empire, and then received an appointment of official supplier to the French Republic. So when the French President chose a wedding present for the future Queen Elizabeth II, it was a sumptuous S.T.Dupont travel case in blue long-grain Morocco leather. This remarkable piece set something of a tradition, since in 2011 Kate Middleton and Prince William received the same gift, produced in the brand’s workshop in the French Alps.

S.T.Dupont owes one of its greatest successes, the Dupont lighter, to loyal customer the Maharajah of Patiala, who ordered one hundred Chinese lacquer minaudière clutch bags for his consorts, each one to contain a solid gold lighter. The workshops spent three years completing this fabulous

order, and in 1941 S.T.Dupont produced the first luxury petrol lighter, quickly followed by the famous Line 2, in a design that harked back to the Thirties.

Cut and crafted from solid brass, and signed like a work of art by the craftsman who made it, the Dupont lighter is a triumph of fine metalwork and the rare mastery of Chinese lacquer, one of the firm’s hallmarks.

It instantly became a status symbol. It attracted a cult following: soon nobody could be seen without one, either on the art scene, including Picasso and Warhol, or in Hollywood, where the list of loyal Dupont customers included Marilyn Monroe.

The Dupont pen, a status symbol

Jackie Kennedy-Onassis also had a Dupont lighter. It was engraved with a simple ‘J’. She loved it so much that in 1973 she ordered a pen to match. So S.T.Dupont hit on the idea of reproducing the roller of the lighter as the body of a pen. And another Dupont icon was born: the “Classique” pen. With its slender form, the first luxury ballpoint became a symbol of modern design. New product, new sensation: people loved the Classique, not only for its impeccable look, but also its perfect balance and precision writing. Just like Dupont travel cases, S.T.Dupont pens are now regularly chosen as gifts from the French Republic to its guests, and can be seen in the hands of a number of Heads of State, including Barack Obama and Hu Jintao.

S.T.Dupont is always looking for the extraordinary and the exclusive, working with such original designers as jeweller Philippe Tournaire, whose pieces are all absolutely exceptional, commemorating the world’s architectural landmarks on an imaginary journey. Karl Lagerfeld has designed a collection called Mon Dupont, a faceted collection whose vibrant colours were devised by mixing up different nail varnishes of a very famous brand!

This year, S.T.Dupont is celebrating 144 exceptional years spent serving the great and the grand, an event which will combine the present with the best of the past.

Two famous customers, Audrey Hepburn™ and Humphrey Bogart™, have become its special icons. Items that were specially designed for them in 1953 and 1947—the Riviera and the Bogie™ Bag—have been either identically reproduced or given a modern makeover to take us on a delicious journey to the unsurpassable glamour of the post-war period.

A collection that also includes a set of pens and lighters designed for each of them.

Taking inspiration from the hat worn by Audrey Hepburn™ in Funny Face, the Audrey Hepburn™ collection has an elegant bow design in powder pink and white Dupont lacquer for the Line 8 lighter and the Liberté fountain pen and ballpoint.

For Humphrey Bogart™, S.T.Dupont is taking this opportunity to associate its emblematic barley guilloche with this legendary figure. Humphrey Bogart’s™ silhouette is engraved on a shield on the Line 2 lighter, the top of the fountain pen and the ballpoint.

For 144 years, S.T.Dupont has expressed its passion for creating exceptional products for exceptional people, generation after generation. In the 21st century, the legend lives on, in perfect harmony with its roots and a future of promise.