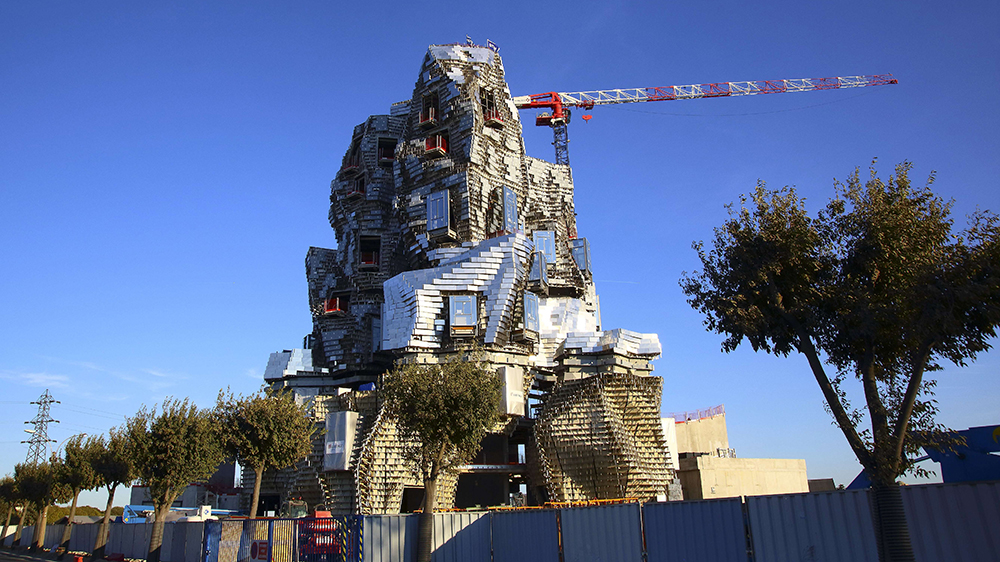 As one of architecture’s most prolific creatives, Frank Gehry has no shortage of work. His latest project is proof that the 91-year-old is still constantly in demand.

Nearing completion in the southern French city of Arles, Gehry’s twisting LUMA tower is a faceted structure with an exterior composed of 11,000 aluminum panels meant to evoke the jagged limestone cliffs in the region. Each one brilliantly reflects the light from countless angles, lending it a dynamic appearance––one critic likened it to a metal tornado. It rises an impressive 183 feet into the air resting on a grand glass atrium at the base spliced with stone.

The utterly contemporary building is set to be the home of LUMA Arles, a local branch of the internationally acclaimed arts organization LUMA. Founded by Swiss art collector and patron Maja Hoffman, the organization is designed to aid independent artists and foster collaboration.

This French outpost, which started construction in 2014, is of particular importance, who grew up in the area. So far, she’s contributed about $168 million to the project, a meaningful sum on any day but especially for a post-industrial city that has long struggled economically.

Deezen noted that Gehry is an architect of choice for sites in need of rejuvenation, a practice that took hold after his Guggenheim Museum in Bilbao, Spain drove an enormous amount of tourism to the city. This new building sits on what had been a railyard abandoned since 1986.

When interviewed by the Financial Times after receiving the green light to start the project, Hoffman said that Gehry’s design was accepted without competition. Hoffman, who also dabbles in film production, had previously co-produced a documentary on the architect entitled Sketches of Frank Gehry. “I knew I wanted to work with Frank,” she said. “To my mind, his free forms go well with the Mediterranean spirit.”

The new structure is slated to open sometime in the spring.