×
By Naomi Rea for ArtNet News 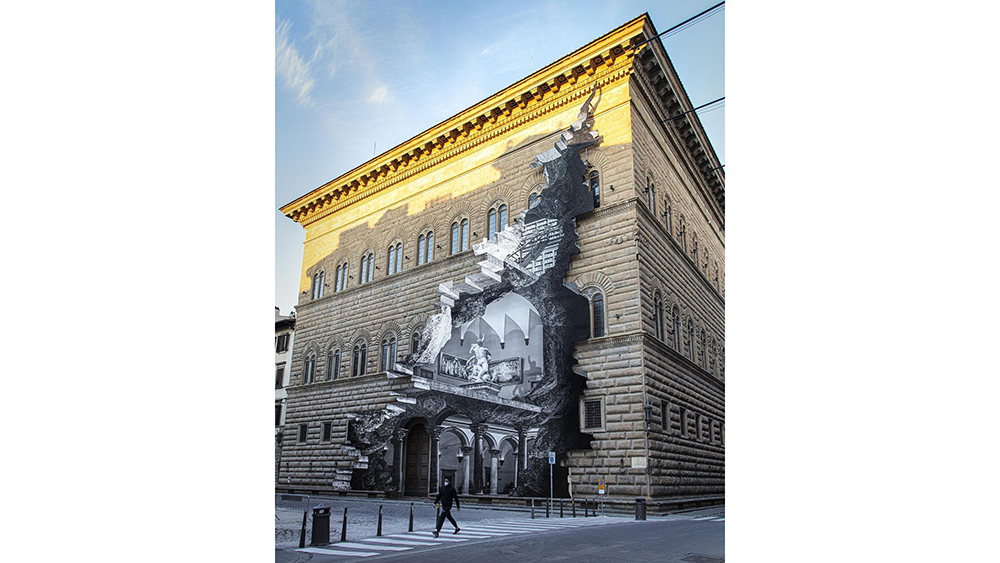 As half of Italy heads back into lockdown, the French artist JR has unveiled a major installation on the façade of the Palazzo Strozzi in Florence that stresses the importance of maintaining access to culture during the public health crisis.

Several Italian cities, including Rome, Milan and Venice, have been back under lockdown since March 15, and will remain closed until April 6. While Florence is under slightly less stringent restrictions than some other areas, museums and other cultural institutions are shuttered.

JR has used his signature photocollage method to create a site-specific installation on the exterior of the Renaissance palazzo. Titled La Ferita, Italian for “The Wound,” the work creates an optical illusion of a great gash running through the institution’s external walls. Through the cracks, those on the outside can once again peer into a black-and-white vision of the interior of the shuttered building, with some of Florence’s famous artworks and cultural heritage on view.

The museum’s director, Arturo Galansino, says that the symbolic wound references the suffering of cultural institutions that have been forced to close or otherwise restrict access to their collections.

“What all these lockdowns have shown us very clearly is that people are hungry for culture. They want to access exhibitions, museums, libraries, theaters, cinemas, to have culture back as a fundamental part of their lives,” Galansino tells Artnet News. “We want this work to be seen as an invitation to rediscover a direct relationship with art and to explore new forms of sharing and participation—a call to action for art and culture in this difficult moment.”

The museum director says he feels a strong sense of responsibility to continue the museum’s public mission while it remains closed, focusing on online education initiatives as well as public art commissions. Fittingly, the JR installation inaugurates a new annual public art commission for the city, aimed at supporting the production and promotion of contemporary art in Italy. The Fondazione Palazzo Strozzi conceived the new Future Art Program with the philanthropist Andy Bianchedi.

The director hopes to be able to reopen the museum’s doors as soon as possible. In the meantime, Galansino speaks of a quiet city that has been denuded of the domestic and international tourists that are usually part of the fabric of daily life. “The beauty of our city is an important legacy which must be experienced and activated by the people,” he says, adding that the successive shutdowns have damaged “not only the economy of our territory but also our identity and our lifestyle.”

“Florence is an extraordinary city and no lockdown can change that,” he stresses. “But we need clarity on the future to be able to properly move forward and develop plans to work with artists, cooperate with cultural partners, and fundraise in the most effective way.”

Check out more stories by Artnet News below:

Museums Used to Pay Huge Fees for Personal Couriers to Travel With Major Loans. New Technology Could Mean They Don’t Have to.