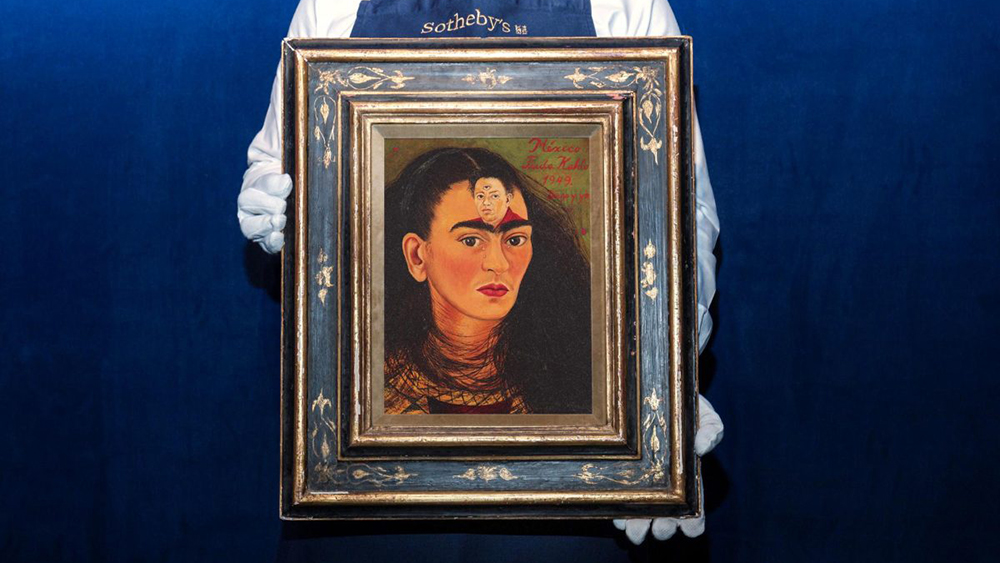 A self-portrait by Frida Kahlo that had been held in a private collection for 30 years sold for a record-setting $34.9 million (including fees) at Sotheby’s in New York on Tuesday evening.

The painting, Diego y yo (1949), depicts the artist gazing tearfully at the viewer; superimposed on her forehead is an image of her husband, the muralist Diego Rivera, who himself has a third eye.

The result quadrupled the artists’ previous auction record of $8 million, notched in 2016 when her 1939 painting Two Nudes in the Forest (The land itself) sold at Christie’s in New York.

Just two bidders—one on the phone with Julian Dawes, Sotheby’s co-head of Impressionist and modern art in New York, and the other on the phone with Anna di Stasi, Sotheby’s senior vice president for Latin American art—competed for the work. The painting, which was offered in the sale with an irrevocable bid hammered with di Stasi’s client at a hammer price of $31 million, just above the $30 million low estimate. The winning buyer was Eduardo F. Costantini, founder of Malba, Museo de Arte Latinoamericano de Buenos Aires.

The Kahlo painting was sold by a descendant of a New York collector, who purchased it in 1990 at Sotheby’s for $1.4 million. Prior to that sale, it belonged to Chicago writer and critic Florence Arquin, who was a friend of Rivera and Kahlo.

Not only did Diego y yo bring a new artist record for Kahlo, but it also become the most expensive work by a Latin American artist ever sold at auction, surpassing the previous record held by Rivera’s painting The Rivals, which sold at Christie’s for $9.8 million in 2019.

In a statement, Dawes said, “Tonight’s outstanding result further secures her place in the auction echelon she belongs, as one of the true titans of 20th-century art.”