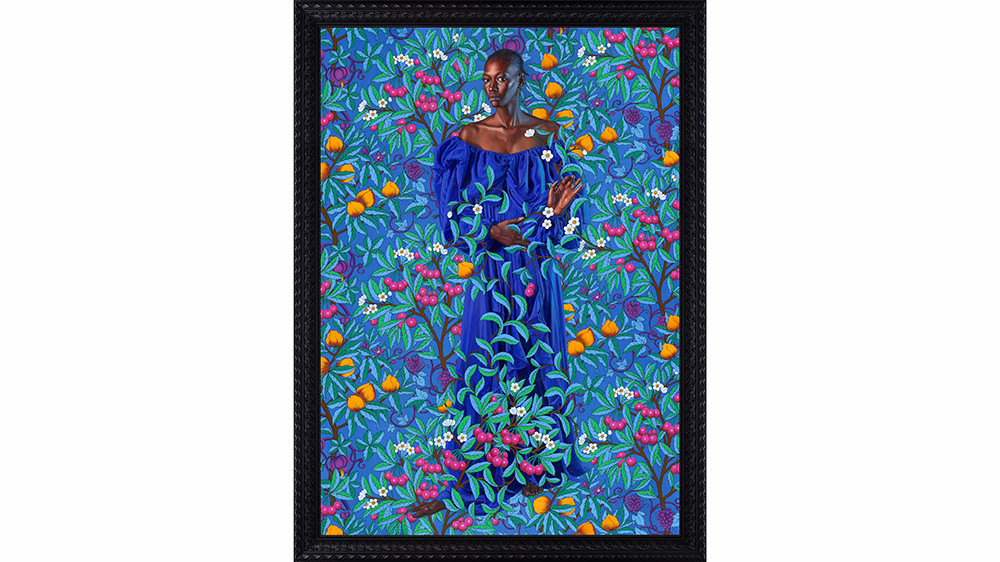 Courtesy of the Artist and Roberts Projects

Above: Kehinde Wiley, Portrait of Aissatou Dialo Gueye, 2020, oil on linen, at Frieze.

The art scene in Los Angeles has been ramping up for years, and this month the action is centered on a neighborhood once considered ritzy but dull: Beverly Hills.

Frieze, the art fair known for its thoughtful, brainy vibe, started in London before colonizing New York and LA and has now announced a Seoul debut for September. Frieze Los Angeles, canceled in 2021 like so many other events, returns February 17 to 20 in a brand-new venue on Wilshire Boulevard, a tent-like structure adjacent to the Beverly Hilton. It will house 100 galleries from around the world, including heavy hitters such as Gladstone and Paula Cooper, as well as a section dedicated to young local dealers. Frieze Sculpture, the fair’s outdoor exhibition of large-scale pieces, will take over nearby Beverly Gardens Park.

But there’s more to see in LA this month than Frieze, because when a major international fair comes to town, with deep-pocketed collectors following in its wake, local galleries and museums put on their Sunday best. If walking in LA weren’t such a faux pas, you could easily take a 10-minute stroll from the fair over to Gagosian Beverly Hills, the West Coast branch of the global powerhouse gallery. This month, around 10 works by Canadian photographer Jeff Wall are on view, most of which have never been exhibited. Wall, famed for his striking, large-format color scenes, has been featured in many solo museum shows, including a current exhibition at Glenstone in Potomac, Md.

Just a block away from Gagosian is the spanking-new flagship of Sotheby’s Los Angeles, the venerable auction house’s first proper exhibition space in the city. Opened in October with highlights from the record-setting Macklowe Collection, this major branch occupies more than 4,000 square feet tucked into a rare 1941 building by the noted Southern Californian architects Douglas Honnold and George Vernon Russell and will feature previews of upcoming sales as well as items that can be bought on the spot. On tap to time with Frieze: 15 to 20 works by Les Lalanne, the late French sculpture duo with a whimsical sensibility.

Gabriel Madan, Love Always Wakes the Dragon, 2021, acrylic, gouache and gel on canvas, at Frieze Focus LA.  Courtesy of the Artist and Gattopardo

There are even more options only slightly farther afield. On February 6, UCLA’s Hammer Museum in Westwood presents Ulysses Jenkins: Without Your Interpretation. Though a new name to many, Jenkins, an LA native who’s now 75, was a pioneer of video and performance art and has been a significant influence on younger Black artists. Remarkably, this traveling show is his first major retrospective.

The SoCal gallery scene has been booming, but this month’s official debut of a space shared by two sister galleries, the art-focused Albertz Benda and the design-minded Friedman Benda, provides a twist: The pair picked a small midcentury house in which to conduct business. The February 19 opening will feature works by Chris Schanck, Daniel Arsham and others from both gallery rosters. Located just off Sunset Boulevard, the cozy setup will make visitors to LA, not to mention real Angelenos, feel right at home.