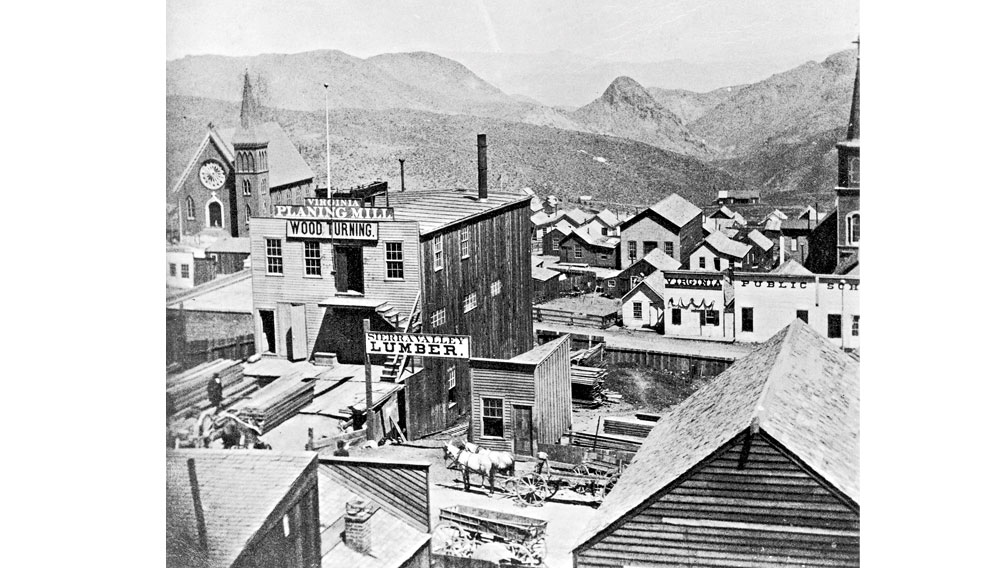 Tales of the search for those raw materials that make possible the objects of beauty included in this month’s jewelry features (see “Brilliant Mines,” page 162, and “Forever Elizabeth,” page 177) are every bit as beguiling as the ornaments themselves. The intrepid souls who first set out to amass their fortunes in the diamond fields of South Africa or the emerald mines of Bolivia often were armed with little more than a few basic tools and the hope of encountering a stroke of luck. Yet for the group of men who first exploited one of the largest known deposits of precious metal in the United States, this luck sometimes proved rather unlucky.

Curiously, the Comstock Lode, located on the eastern slope of Mount Davidson in Nevada’s Virginia Range, was passed over for more than a decade by untold numbers of individuals making their way to California during the Gold Rush. In fact, those placer miners who settled along the Carson River to eke out a living panning gold were frustrated daily by the thick blue mud that clogged their rockers. Only in 1859 did analysis of a sample reveal that this strange clay was an almost pure compound of silver. Over the course of the next two decades, this seemingly barren terrain yielded almost 7 million tons of silver and gold ore, then worth in excess of $300 million.

Because of its size, the Comstock Lode’s geographical boundaries became a matter of guesswork—as did its ownership. The first would-be claimants were the Grosh brothers, two mineralogists from Pennsylvania who in 1857 gathered ore samples from the site, but neither lived to benefit from their find: Hosea died of blood poisoning resulting from an injury and Ethan succumbed to frostbite crossing the Sierra Nevada.

The brothers had left their cabin in the care of one Henry Comstock, who appropriated their property and laid claim to lands on Gold Hill, where he believed they had unearthed their samples. When miners Peter O’Riley and Patrick McLaughlin uncovered a rich deposit while digging near a spring, Comstock alleged that the spring, and therefore the ore, belonged to him. The men resolved this dispute through a joint partnership, but none of them realized the true value of this soggy pit, which became the legendary Ophir mine. Thus, these original silver kings sold their stakes for token sums ranging from $3,500 to $40,000.

The financial burdens incurred by speculators seeking to extract their treasure and defend their claims were a bonanza for William C. Ralston of the newly formed Bank of California. Seeking to capitalize on the boom in Virginia City, Nev., (pictured), Ralston opened a branch there and installed as its manager an unscrupulous lawyer named William Sharon. This pair lent ready money to struggling mine companies using stock as collateral; by foreclosing on these loans, they managed to gain control of most of the major mines on the Comstock.

Ralston made the most of his burgeoning wealth, building a magnificent Italianate villa, Ralston Hall, in Belmont, Calif., and the grand Palace Hotel in San Francisco. His triumph, however, was short-lived. In 1873, when Germany abandoned the silver standard after the Franco-Prussian War, silver prices plummeted, and in August of 1875, the Bank of California failed. The bank’s board of directors fired Ralston as president and appointed his more conservative partner, Darius Ogden Mills, in his stead. To protect himself from creditors, Ralston signed his assets over to Sharon. Afterward, the troubled tycoon—by all accounts an excellent swimmer—took a dip in San Francisco Bay. His body was found a short while later near Fisherman’s Wharf.

A syndicate consisting of John Mackay, James Flood, William O’Brien, and James Fair emerged as the majority shareholders in key Comstock mines just before a giant strike came in. These Bonanza Kings became some of the West’s wealthiest men, while the lode’s original discoverers faded into obscurity. McLaughlin died indigent, while his fellow miner O’Riley ended his days in an asylum. Comstock, whose name remained attached to the phenomenal find, shot himself with a revolver in the wilds of Montana. For Sharon, however, Ralston’s demise had a silver lining: Not only did he join Mills in resuscitating the Bank of California, but he also acquired the lavish Palace Hotel and took up residence in Ralston Hall.

Correction: The feature “Million-Dollar Looks” in the September 2011 issue (page 124) should have included the Irving Penn Foundation as the organization representing Irving Penn’s work.