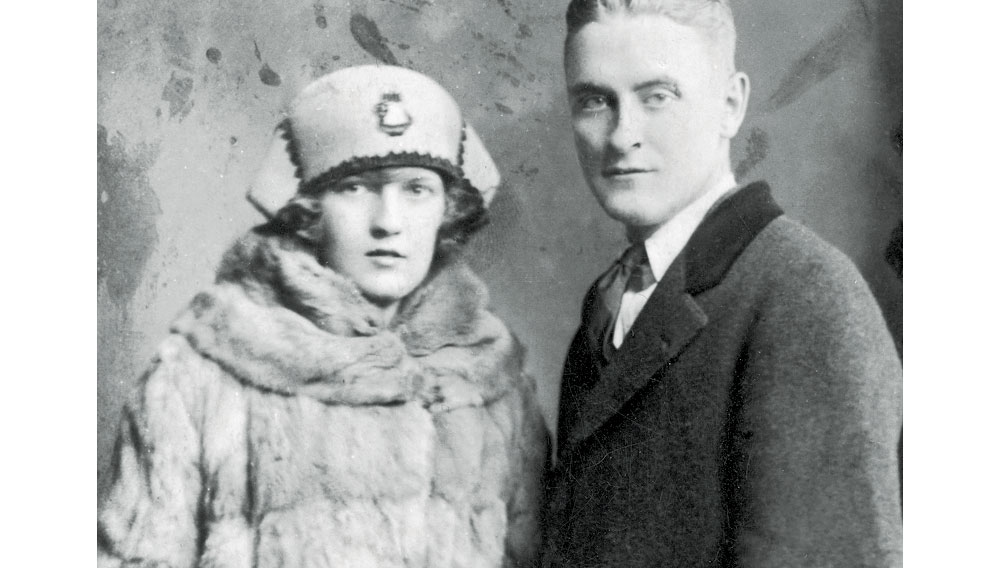 Few understood that hedonistic era more acutely than the man who named it, F. Scott Fitzgerald, and his wife, Zelda. With the success in 1920 of Fitzgerald’s first book, This Side of Paradise—a lyrical look at love and morality through the eyes of a Princeton undergraduate—the young couple (pictured) became the poster children of a new generation intent on living by its own codes of behavior. “The wise writer,” Fitzgerald wrote that year, “writes for the youth of his generation,” and true to these words, he captured with lapidary precision the energetic recklessness of the time in The Great Gatsby, his 1925 novel about an obscure Midwesterner, Jay Gatsby, who turns to bootlegging to earn the fortune that he believes will woo Daisy Buchanan, the young woman he loves, away from her wealthy husband.

Had Gatsby actually achieved this dream, the protagonists’ lives might have resembled those of the Fitzgeralds themselves. After all, Zelda served as the model for Daisy, while the author shared much with his hero. If Gatsby invented a fictional persona to win his beloved, then Fitzgerald, the son of middle-class parents from Minnesota, invented fiction: Initially, Zelda’s prominent Alabama family disapproved of Fitzgerald’s courtship, but his early commercial success enabled him to marry her, and together the newlyweds plunged themselves into revels that rattled windows and shook chandeliers from Manhattan to the French Riviera.

“We felt like small children in a great unexplored barn,” Fitzgerald later recalled. Most contemporaries delighted in their inebriated antics, but others saw them as more high-strung than high-spirited. A Princeton classmate noted in his diary at the time: “Called on Scott Fitz and his bride. I do not think [the] marriage can succeed. Both drinking heavily. Think they will be divorced in 3 years. Scott [will] write something big—then die in a garret at 32.”

To support their extravagant lifestyle, Fitzgerald churned out short stories, neglecting his fourth novel, Tender Is the Night, which took him nine long years to complete. The couple joined other expatriate writers and artists in France, where Fitzgerald, between drinking binges, struggled to develop his story of a prominent psychiatrist whose mental state deteriorates as he attempts to treat his wife’s madness. Here again, his life and narratives intertwined. Frequently drunk, he and Zelda fought constantly, and after ending an affair with a French aviator, she tried to overdose on sleeping pills. At a restaurant in St.-Paul-de-Vence, convinced her husband was flirting with dancer Isadora Duncan, she flung herself down a flight of stone steps; and on a drive to Paris, she grabbed the wheel of the car from Fitzgerald and attempted to steer them off a cliff.

By 1934, when Fitzgerald finally published Tender Is the Night, Prohibition and the Jazz Age had ended, and Zelda, who was diagnosed as schizophrenic, spent the remainder of her life in and out of sanitariums. In 1948, she was locked in her room at Highland Hospital in Asheville, N.C., when the building caught fire; her charred body was identified by a slipper. Fitzgerald—who began by writing for youth and labored to write for middle age—had died of a heart attack in his Hollywood apartment eight years before, at the age of 44, much as his classmate predicted. At the time, he was at work on something big, an unfinished novel, but like Gatsby, he did not know that his dream—his masterpiece—was already behind him.

This issue’s cover story is dedicated to longtime Robb Report automotive contributor and friend Patrick Paternie, who passed away March 10 at age 65. A well-respected writer and driver, Pat loved all cars, none more than Porsches. His own early 911 race car was a familiar sight on the track, so it is poignant that Pat suffered a fatal heart attack after pulling into the pits at Willow Springs International Raceway following completion of his final race. Pat’s talent, enthusiasm, and friendship will be sorely missed. Drive on, Pat. —Robert Ross