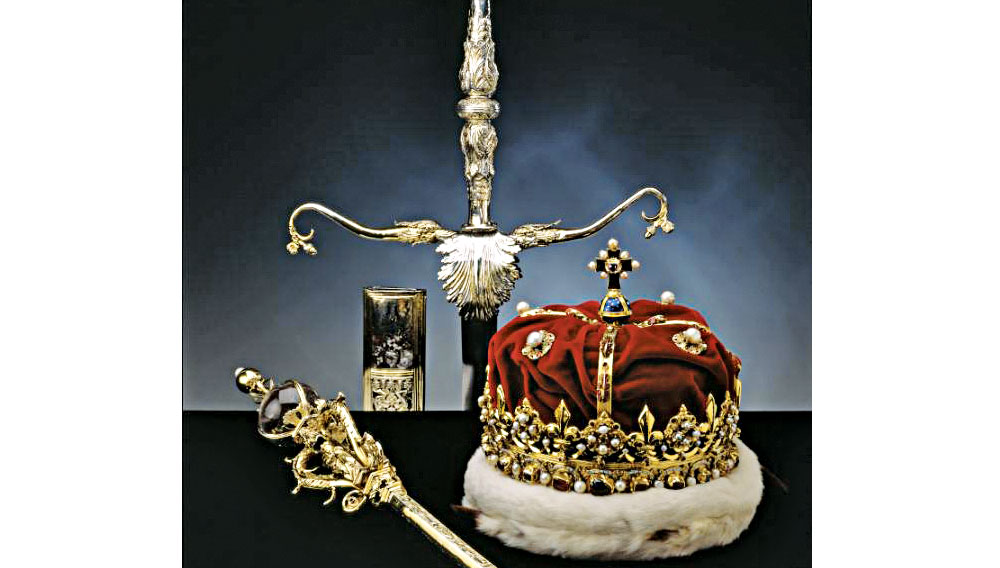 The acceptance of certain gifts sometimes has unexpected consequences. The Scottish monarchy, for instance, received as tribute from the Vatican two treasures—a scepter from Alexander VI and a sword from Julius II—that, together with the crown, form the crown jewels known as the Honours of Scotland, the inspiration for one of this year’s Ultimate Gifts (see “For Love of Honour,” page 158). But this trinity—the crown flanked by these reminders of Roman authority—furnishes an apt metaphor for the precarious political state inherited by Mary, Queen of Scots, at whose coronation the Honours were first used.

Although Scotland was a Catholic nation when the infant Mary was crowned, Protestant dissension stirred up in England by Henry VIII’s gradual break with Rome spread across its borders, and in 1560 the Scottish Parliament also declared its independence from the papacy. The inexperienced queen, by then a young widow (her first husband, Francis II of France, had died within two years of their marriage), was forced to preserve a delicate diplomatic equilibrium. To Elizabeth I of England, whom Mary hoped to succeed, she portrayed herself as a lukewarm Protestant; but to her brother-in-law Charles IX of France, Philip II of Spain, and Pope Pius V—all of whom sought to restore papal jurisdiction in Scotland—she professed her loyalty to the Catholic faith. Indeed, the pontiff, who had excommunicated Elizabeth, saw Mary as the perfect pawn for uniting the English and Scottish crowns under Catholic rule.

Yet the Scottish queen shattered this careful balance in 1565, when she married her first cousin, Henry Stuart, Lord Darnley. If her first marriage secured a valuable political ally, her second marriage placed her at odds with the opposing influences that surrounded her. The couple married without the necessary dispensation from the Vatican, which required approval of unions between first cousins. As descendants of Mary Tudor, a sister of Henry VIII, both Darnley and Mary had legitimate claims to the English crown, as would their offspring—a fact that gave Elizabeth little comfort. Nor was the Catholic king consort embraced by Scotland’s Protestant lords, who initiated a brief, unsuccessful rebellion. Even Darnley was dissatisfied: Unhappy in the role of figurehead, he importuned Mary to grant him the Crown Matrimonial, which would give him equal power to rule.

Ambition prompted the young consort to conspire with the Protestant nobility against Mary, who had formed a close friendship with her private secretary, David Rizzio—a cultivated Italian courtier and agent for Pius V. Convinced of his wife’s infidelity with Rizzio and assured that these nobles would place him on the throne, Darnley arranged for the conspirators to gain access to the pregnant queen’s chambers at the Palace of Holyroodhouse. Intent on ridding Scotland of the papal spy, the attackers burst in upon the queen and her secretary. While one traitor held her at gunpoint, the others dragged Rizzio from the room and viciously stabbed him to death. Darnley, who emerged from behind a curtain as the queen’s guard broke into the chamber, claimed to know nothing of the intrigue.

Mary pardoned her husband, from whom she became increasingly estranged, but Darnley’s part in this attempted coup sealed his fate—and that of the queen. In the early hours of the morning on February 10, 1567, an enormous explosion rocked Kirk o’Field, the suburb of Edinburgh where Darnley then resided. His house, the Old Provost’s Lodging, was blown to pieces, and the bodies of the king consort and his servant were discovered in an orchard some distance away. The two men were not killed in the blast, however; they had instead been strangled, perhaps while fleeing the scene.

Though theories as to the identities of Darnley’s assassins abound, in his book The Entity: Five Centuries of Secret Vatican Espionage, author Eric Frattini notes that the knot used to strangle him was an unusual one of Middle Eastern origin known to the Jesuits, “God’s soldiers.” Frattini posits that Mary’s second husband was killed by agents of Pius V, abetted by her future spouse, the Earl of Bothwell. If so, the papal operatives’ gift of retribution to the pontiff certainly yielded unexpected and undesirable consequences. After her forced abdication and imprisonment in England, Mary would be accused of murdering her husband to marry Bothwell; she was eventually tried for treason and executed at Fotheringhay Castle, and her son by Darnley, James I, united the Scottish and English crowns under Protestant rule.