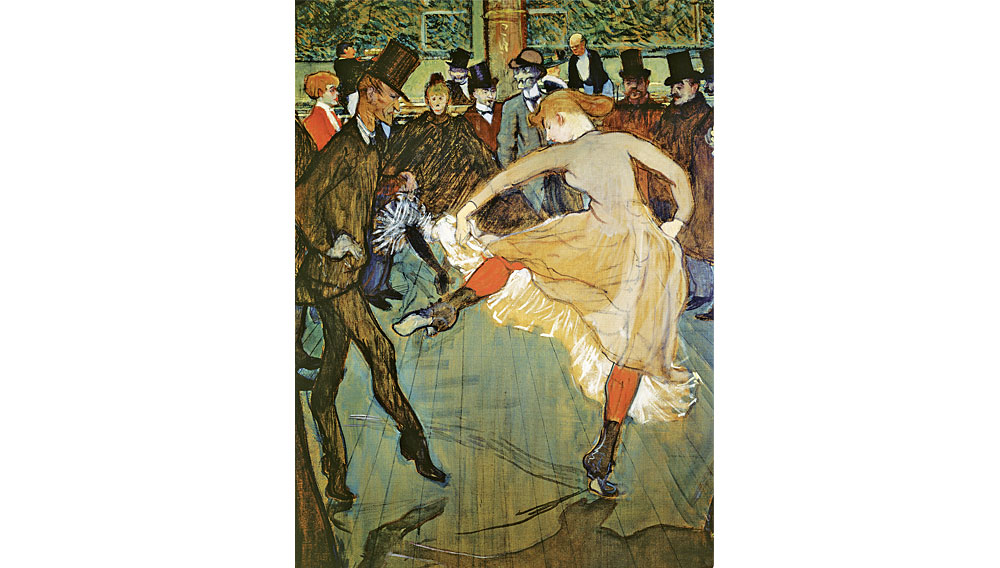 History consists of alternating phases of vitality and decay, in between which interesting things happen. Spanning the decades from the end of the Franco-Prussian War to the advent of World War I, Europe’s Belle Époque was such a period. During this frenetic and fabulous era, the telephone, automobile, phonograph, and motion picture emerged, each in its own way weakening the centuries-old divisions between the bourgeoisie and aristocracy. The arts, too, broke down barriers. The short stories of Guy de Maupassant opened windows, if not doors, between the social strata, as did the realistic novels of Émile Zola. And in the cabarets of Montmartre, aristocrats, businessmen, artists, and prostitutes freely mingled, as we see in the art of Henri de Toulouse-Lautrec, an example of which, La Clownesse Assise, is part of one of this year’s “21 Ultimate Gifts” (page 109). Although Toulouse-Lautrec was not unique among his contemporaries in drawing upon the nightlife of Belle Époque Paris for material, his brief life and sizable oeuvre epitomize for many this garishly fascinating intersection of social classes.

Born to Count and Countess Alphonse de Toulouse-Lautrec, young Henri grew up at the Château du Bosc near Albi with every expectation of a career and marriage suited to his station. His noble birth, however, may have been his undoing. Both his parents and grandparents were first cousins, and some experts believe that, because of this inbreeding, Toulouse-Lautrec suffered from a genetic disease that causes unusual brittleness of the bones. During his early teenage years, he broke both legs, neither of which ever grew to its proper length. The resulting disfigurement—along with the painful medical treatments and frequent doses of morphine administered by his parents’ doctors—left him a wellborn but emotionally scarred outcast.

Physically ill-equipped to participate in the explosive urban life of Paris, he situated himself in the sector of that city where he could best observe it in all its gaudy variety. Montmartre, in the 18th arrondissement, was the center of the avant-garde in the last quarter of the 19th century. Electricity had been introduced, and the restaurants, absinthe bars, brothels, and dance halls overflowed into the early hours with revelers from all walks of life. In these establishments, Toulouse-Lautrec did not need to seek the wider world; he simply ensconced himself in a corner and watched as the world danced, flirted, drank, and caroused before him.

These tableaux became the chief subjects of his art, which, in its own way, contributed to the atmosphere of change. An adept printmaker, he produced posters for many of the cabarets he frequented, most notably the Moulin Rouge, where a table was always reserved for him. One of his first efforts depicted the dancer La Goulue (a.k.a., Louise Weber), who kicked her legs so high when she performed that she exposed her panties. This salacious exhibition, well advertised by Toulouse-Lautrec’s sexually frank images, became the sensation known as the cancan.

Toulouse-Lautrec’s indefatigable printing press spread the fame of many other women as well; among them La Goulue’s replacement, Jane Avril, née Jeanne Beaudon, who, like the artist, was born to titled parents yet driven by adverse circumstances into the demimonde. But if his public posters exploited these women’s allure to sell tickets, his paintings, drawings, and noncommercial prints often expressed the private, after-hours milieu of Montmartre’s cabarets and bordellos. In such works as The Two Girlfriends and Salon de la Rue des Moulins, we glimpse the hollow expressions of working women whose glamour and promiscuity have exacted a heavy price. The melancholy and air of moral decay inherent in these studies not only prefigured the fates of many of these professional temptresses, but also reflected the spiritual aftermath of the Bell Époque’s excesses, as social, economic, and political tensions mounted in Europe at the fin de siècle. Toulouse-Lautrec’s empathy for these demimondaines was genuine: One year into the new century, at the age of 36, he died in a sanatorium as ignobly as some of his subjects—from alcoholism and the ravages of advanced syphilis.