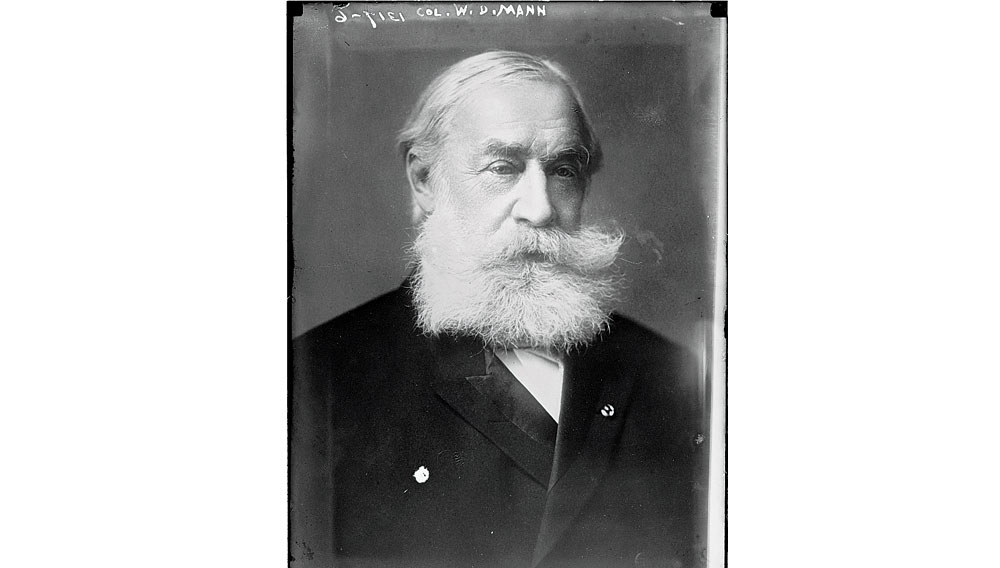 Those of us who write about topics of interest to affluent readers might find our labors more remunerative—and perhaps, for some, more entertaining—if we turned our literary attentions from such subjects as appear in this month’s “Private Preview 2013” (see page 77) to the members of our audience themselves. This formula certainly proved lucrative for Colonel William d’Alton Mann (pictured), who, like so many others in post–Civil War America, transformed diligence, drive, a keen eye, and native cunning into power, position, and fortune. This veteran of the Battle of Gettys­burg lunched at Delmon­ico’s, drank only the finest Champagne, and owned a Manhattan brownstone as well as a country estate. Although he had patented a design for a railway sleeping car and published an Alabama newspaper, neither of these ventures furnished the funds necessary for so refined an existence; that windfall arrived in 1891, when he acquired a New York weekly called Town Topics.

This publication debuted as the American Queen in the 1870s, with the high-minded mission of keeping its readers abreast of developments in literature, music, and the arts; but under Mann, the renamed periodical received a new charter: to recount in vivid detail the trysts and transgressions of Gotham’s Gilded Age elite. With the unerring instincts of a military strategist, Mann developed a network of spies, installing his operatives as servants in the city’s most prominent households and recruiting employees of the telegraph companies to keep him informed. The intelligence thus gathered found its way into his pages, which urbanely exposed the misdeeds of the privileged few. “When mature spinsters take it into their heads to indulge in a little souse party,” he observed in one edition, “they should do it in the privacy of their house. I thought this . . . at a certain hotel on New Year’s Eve, when I saw the hennaed head of a fair but fat and fully forty maiden vainly striving to direct her uncertain feet on a zigzag course around the tables.” To ensure that the offenders did not escape identification, Mann placed these blind items adjacent to bland social announcements listing victims’ names. Yet the reliability of his information and the expert advice of Judge Joseph H. Deuel, who served as his unofficial legal counsel, soon emboldened Mann to openly attack certain targets. “Miss Van Alen suffers from a kind of throat trouble,” he wrote. “She cannot go for more than an hour without a drink.”

As a catalog of patrician peccadilloes, sexual aberrations, and moral failings, Town Topics became one of New York’s most widely read—and widely dreaded—publications. Not content merely to fatten his circulation, however, Mann branched out into the blackmail business, routinely accepting “loans” and purchases of worthless stock from society’s “jackasses, libertines, and parvenus” in exchange for his silence. The success of this practice soon inspired an even more financially rewarding tome, Fads and Fancies of Representative Americans—a leather-bound annual that contained flattering biographical sketches of prominent individuals, all of whom dutifully paid thousands of dollars in “subscription” fees.

Mann’s remarkable racket flourished until 1905, when he attempted to extort money from a Wall Street executive who was having an affair with a chorus girl. Rather than pay, this gentleman confessed his sin to his punctilious wife—the etiquette authority Emily Post—who urged him to go to the police. A sting operation ensued, and Collier’s publicly decried Mann and named Deuel as his accomplice. Deuel sued Collier’s and its editor for libel, but after Mann was forced to admit in court to receiving the then princely sum of nearly $200,000 from the subjects of Fads and Fancies, the jury took only minutes to deliberate before finding Mann’s detractors innocent of all charges.

The colonel’s stranglehold on society was broken, but he remained proud of his oeuvre (“To save the sinner by rebuking the sin,” he wrote, “is an achievement over which the angels rejoice”), and indeed, Town Topics continued to publish until the 1930s, when it finally closed its doors amid fresh accusations of blackmail. Yet a Time magazine article of the day gave Mann the last word, noting the satisfaction he would have taken in seeing reporters pore over volumes of Fads and Fancies in the New York Public Library: “Twice during his life, Colonel Mann offered the book to the library,” the piece concluded. “Twice, to his indescribable indignation, it was refused.”

Correction: A lighter that appeared in the cigars feature in the December issue (“And to All a Good Light,” page 238) is from S.T. Dupont.