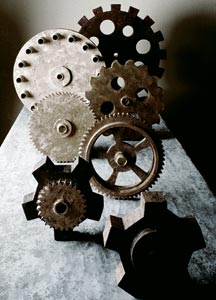 In 76 b.c., the captain of a merchant vessel from Rhodes veered too close to the cliff-lined shores of an insignificant island off the farthest southern tip of the Greek peninsula, wrecking his treasure-filled ship. As sculptures, jewelry, transport jars, and the hull itself descended to the ocean’s floor, currents of human knowledge and history that might perhaps have swept mankind into a very different and perhaps brighter future suddenly shifted, displacing one collective destiny with another.

This loss would not be reckoned until 1901, when a team of Greek sponge divers exploring the waters off the isle of Antikythera happened upon the wreck. One of the divers splashed to the surface in a panic, shouting to his shipmates that he had come across the bodies of dead women. These “women” turned out to be calcified bronze and marble statues, and subsequent dives uncovered the accompanying trove of coins and amphorae. None of the men, however, recognized that, of the riches they carried to the surface, a certain nondescript lump would prove the most priceless: An encrusted rectangular wooden box, measuring approximately 1 foot high, 6 inches long, and 3 inches wide, this object would come to be known as the Antikythera Mechanism.

As the wooden box dried, it collapsed, revealing an intricate system of bronze gear wheels and axles inscribed with mostly illegible characters. The box panels, too, had been etched with writing, but archaeologists at the time showed little interest in deciphering its meaning; several, in fact, posited that the object was not contemporaneous with the other artifacts and had instead been discarded during the Middle Ages and only coincidentally drifted among this cache of antiquities. Then, in 1951, Derek de Solla Price, a professor of scientific history at Yale, set out to solve the riddle. Eight years later, Price published his conclusions.

The letters in the inscriptions were of ancient origin, dating to the first century B.C., including fragments of a parapegma, or astronomical calendar, developed by the astronomer Geminus, who lived in Rhodes during that period and who, Price postulated, might have built the device. Its clockwork, he determined, had been ingeniously configured to calculate the solar and lunar positions. Three dials on the exterior of the box indicated the path of the sun in relation to the zodiac, the 18-year cycle of solar eclipses, and the phases of the moon, respectively. (Subsequent studies have shown that this mechanism also very likely calculated the epicycles of the five planets known to the Greeks: Mercury, Venus, Mars, Jupiter, and Saturn.) But most astounding of all, this ancient computer relied upon an elaborate arrangement of carefully calibrated differential gears approximately 1,700 years before they were supposed to have been invented. These essential components of modern engineering—assumed to have first appeared in a clock made by Swiss mathematician Joost Bürgi in the late 16th century—had somehow emerged from the theoretical mists of the Hellenistic age, found practical application, and vanished inexplicably from Western culture.

No evidence exists to suggest that machines like the Antikythera Mechanism were commonplace: Its presence in a cargo of other luxury items would itself contradict that possibility. Knowledge of differential dynamics appears not to have been widespread: Archimedes, in the previous century, resorted to an awkwardly complex set of conventional gears to operate his mechanical globe. On Rhodes, theoreticians like Geminus and Poseidonius (who, Cicero claimed, had constructed an astronomical clock far more sophisticated than that found at Antikythera) apparently leapfrogged their contemporaries in devising systems that could account for a multitude of variables in compact and elegant frameworks. In the America of 1793, Eli Whitney would transform industry with his far less complicated cotton gin; the simpler application of the same principles would enable Émile Levassor to invent the modern automobile transmission and John Starley to perfect the bicycle. Had the Antikythera Mechanism reached its destination (probably Rome), these innovations might have transformed civilization far sooner—or given rise to far greater ones. After all, the Greeks did not envision the convoluted interdependence of the heavens, with all of its contingencies, to separate seeds from fiber; rather, they did so to condense, in a space the size of a shoe box, the unseen laws of that most unique machine of all, our universe.