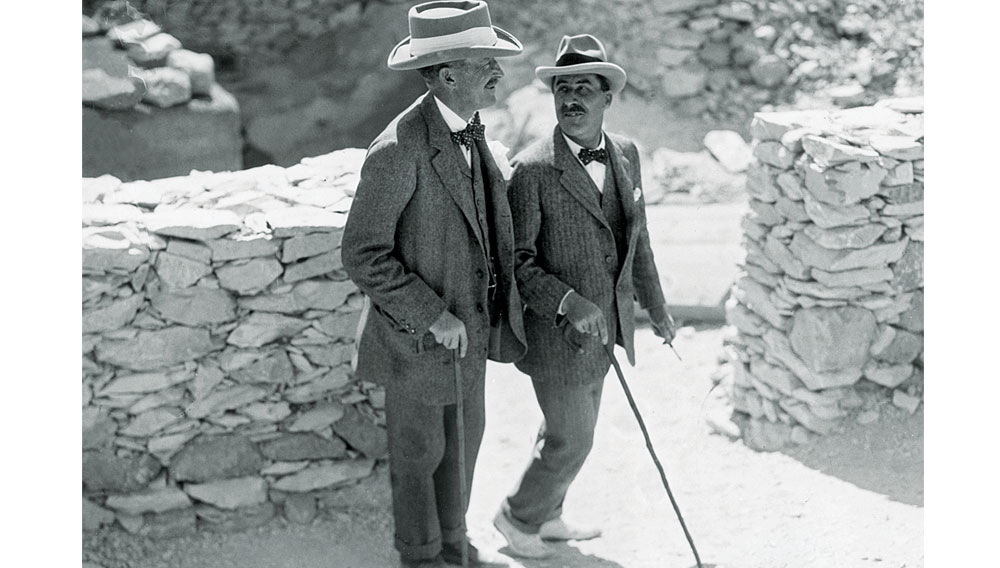 On the afternoon of November 26, 1922, a small group descended a flight of 16 steps that led below ground to a plain stone-and-plaster wall bearing a seal. One of the men pried a stone loose and inserted a candle inside. “At first I could see nothing,” he later recalled. “But presently, as my eyes grew accustomed to the light, details from the room within emerged slowly from the mist, strange animals, statues, and gold—everywhere the glint of gold.” A thin, older gentleman beside him anxiously asked, “Can you see anything?” The younger man replied, “Yes, wonderful things.”

For 15 years, archaeologist How­ard Carter and the fifth Earl of Carnar­von (pictured together) had searched Egypt’s Valley of the Kings for the elusive tomb of Tutankhamen. An art collector his entire life, Carnarvon also peered inside, surveying the scene with a connoisseur’s eye and noting furniture of “surpassing beauty . . . from a period when Egyptian art reached one of the culminating points.”

As he gazed more than 3,000 years into the past, the earl must have felt awe and ecstasy (emotions we hope, in some small way, explorers of this year’s Best of the Best issue will share as they peruse the wonderful things in the following pages). Indeed, if Carter’s triumph was largely professional, then the 56-year-old peer’s was personal. As Lord Porchester, he had been a restless young man, who dropped out of Eton to travel with a private tutor. After a two-year stint at Cambridge, he bought a 110-foot yacht, Aphrodite, and sailed to Spain, Africa, and South America. Only the illness of the fourth earl cut short these voyages, compelling him to return to Britain. After his father’s death in 1890, he continued his exploits, once again traveling the world and collecting art and antiquities, examples of which later became part of the finest private collection of Egyptian artifacts in the world.

The most valuable find of the new earl’s career, however, came in 1895. Almina Wombwell was the daughter of an undistinguished widow and was goddaughter to financier Sir Alfred de Rothschild, whose child most of London society believed her to be. When Carnarvon met her, the young bachelor was £150,000 in debt—a fact that doubtless contributed to his proposal of marriage. The wealthy Rothschild paid handsomely to secure Wombwell’s position as the Countess of Carnarvon, agreeing to clear the earl’s debts and to settle on the couple a princely annual income for their lifetimes.

The infusion of cash enabled Carnarvon to make improvements to his many estates, including Highclere Castle in Hampshire, and to indulge his enthusiasm for the latest novelty, the motorcar. This hobby had fateful consequences when he wrecked his Panhard-Levassor on a country road in Germany. He would never fully recover from his injuries, which left him with a permanent limp and a susceptibility to illness that required him to winter in warm climates.

Carnarvon’s seasonal sojourns to Egypt became a part of his cure. He met Carter in 1907 and, for the next decade and a half, funded their mutual dream of making a major archaeological discovery. Though they met with modest success, uncovering some tombs from the Middle Kingdom and two temples, the cost of meticulously moving countless tons of limestone debris proved anything but modest. The earl had spent an estimated £50,000 (more than $16 million in today’s money) by the time Carter finally uncovered the first of the stone steps near the tomb of Ramses VI.

Though his money unearthed the greatest find in archaeological history, Carnarvon never laid eyes on the tomb’s most magnificent treasure, the king’s sarcophagus, which lay in an inner chamber. The frenzy of publicity surrounding the dig forced the earl and Carter to take a break from their labors. While Carnarvon was on a boating holiday along the Nile, his Egyptian cure became a curse: He contracted blood poisoning from a mosquito bite. Less than a month later, on April 5, 1923, the always-frail peer turned to Lady Carnarvon at his bedside. “I have heard the call,” he told her. “I am preparing.” Within moments of his death, the power throughout Cairo failed, plunging into an eerie darkness the city on whose ancient past this restless foreigner had shed so much light.

Corrections: Members of the private upstairs lounge at the Miami restaurant Casa Tua, which appeared in Robb Report’s February issue (“Nightlife Ascending,” page 113), pay $3,500 for the first year and $3,000 per year thereafter.

The Park Hyatt Ningbo Resort and Spa, which appeared in the April issue (“Ningbo Is Its Name,” page 49), is located on the shores of China’s Dong Qian Lake.