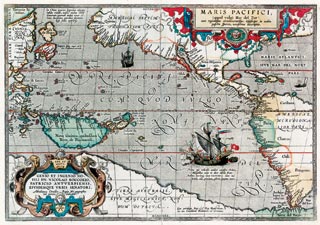 While NASA’s rover twins investigate Mars, an exhibit at the Sonoma County Museum (707.579.1500, www.sonomacountymuseum.com) in Santa Rosa, Calif., chronicles the exploration of an earlier frontier: the Pacific Coast of North America. Mapping the Pacific Coast: Coronado to Lewis and Clark, which runs through May 30, features 36 rare maps and illustrations from the Quivira Collection—documents dating from 1544 to 1802 compiled by history buff and sailor Henry Wendt and his wife, Holly, the founders of Quivira Vineyards. The exhibit, which celebrates the bicentennial of the Lewis and Clark expedition, traces treacherous ocean voyages by early European explorers, the quest for the mystical city Quivira by Spanish adventurer Coronado, reported sightings of sea monsters, and the search for the Northwest Passage. One map includes exquisite depictions of Magellan’s Victoria and the Great Wall of China. The exhibition also has an interactive component: Aspiring cartographers can test their skills using replicas of 16th-century navigation tools and a GIS computer mapping system.