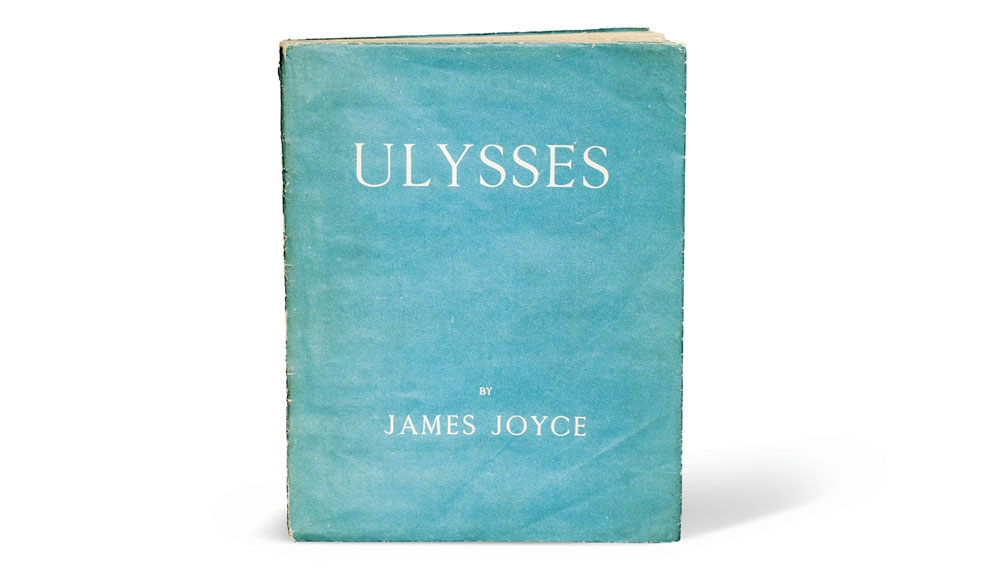 The odyssey of Ulysses has taken the novel from being banned to becoming a coveted collectible.

While James Joyce enthusiasts look forward to Bloomsday, the annual celebration of the Irish author’s life and work that takes place June 16, Joyce fans who are also serious bibliophiles may be more interested in April 9 through 12, when the New York Antiquarian Book Fair comes to the Park Avenue Armory in Manhattan. The fair’s offerings will include at least one rare first-edition Ulysses, the Joyce novel that follows Dubliner Leopold Bloom for a day on June 16, 1904. Hailed as a masterpiece when it debuted in 1922, the 700-plus-page stream-of-consciousness tale has lost none of its potency with literati, and its first edition continues to gain popularity with collectors. The initial print run of the softcover novel yielded only 1,000 copies, none of which were allowed in the United States.

“The book was anticipated for many, many years because of its serialization in the Little Review,” says Terry Halladay, literature manager for the William Reese Company, a rare-books dealer in New Haven, Conn. The Little Review was a U.S. literary journal that published Ulysses in installments from 1918 until 1920, when the journal’s editors were charged in New York with circulating obscene material. The charges were based largely on the journal’s publishing of the “Nausicaa” chapter of Ulysses, in which Bloom fantasizes about a young woman until fireworks explode at a nearby bazaar. The metaphor was not lost on the judges, whose verdict in 1921 effectively banned the book in the United States. It was also banned in the United Kingdom.

Thus the first edition of Ulysses was published in Paris, by Shakespeare and Company, a bookstore owned by the U.S. expatriate Sylvia Beach. It was not until 1933 that the book became legally available in the United States, after Bennett Cerf, a founder of the publisher Random House, won a landmark censorship case titled United States v. One Book Called Ulysses.

Collectors seeking a first-edition Ulysses will find one that is in superb condition at the Raptis Rare Books booth at the New York Antiquarian Book Fair. The Brattleboro, Vt., dealer’s example is priced at $75,000. Other dealers that may bring first editions of Ulysses to the fair include the William Reese Company and Bib­lioctopus of Century City, Calif. If they do not have a copy on hand, they should be able to locate one for a collector.

Tom Lecky, head of the department of printed books and manuscripts at Christie’s New York, presided over the 2002 sale of a first-edition Ulysses for $460,500, an auction record for a Joyce book. The initial Ulysses production run included three versions: the standard edition (750 copies), one printed on heavier paper and with wider margins (150 copies), and one printed on Dutch handmade paper (100 copies). The record-setting copy belongs to the last group and includes an inscription from Joyce. The same copy had sold at Christie’s in 1988 for $42,000. Lecky says that today it is worth twice as much as its 2002 price. “Very few 20th-century books are seven-figure books,” he says, “but this one deserves to be, and I can see it making that.”

At a Christie’s auction in 2003, a collector paid $24,000 for just the wrapper—the softcover analog to a dust jacket—of a first-edition Ulysses. As for the book itself, Lecky suspects that someone purchased it in Paris and brought it back to the United States bare, lest its telltale blue wrapper catch the eye of customs inspectors.