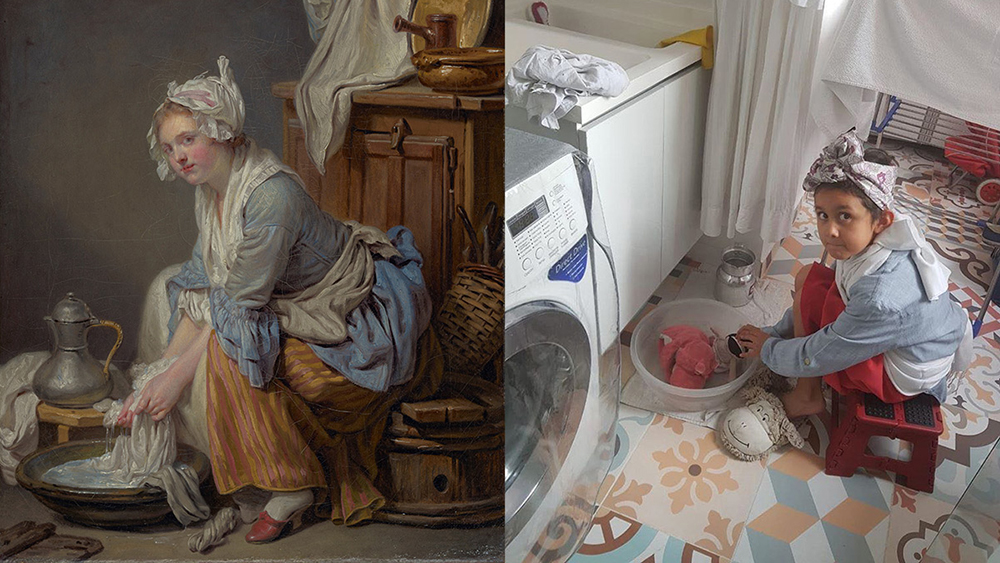 Until last month, you probably had neither the time nor the inclination to recreate a Jeff Koons sculpture out of a pile of old socks. But that was in your previous life. Now that we’re all trying to stave off isolation madness by finding creativity anywhere, including our sock drawers, art lovers with time on their hands have been inundating the social media accounts of the J. Paul Getty Museum in Los Angeles with recreations of the museum’s art works.

Last week, the museum, which is currently closed due to the Covid-19 crisis, challenged its social media followers to impersonate works of art from the collection using three household items. The challenge, inspired by the Rijksmuseum in Amsterdam and a Dutch Instagram account, Tussenkunstenquarantaine (which means Between Art and Quarantine), received “countless creative interpretations of iconic artworks”, according to Getty Museum staff.

Bored, quarantined art enthusiasts have recruited their children, pets, food, laundry and stuffed animals to recreate works from the Getty collection, which ranges from Neolithic clay figurines to contemporary photography and can be searched online here. On Thursday, The J. Paul Getty Trust also announced that it will create a $10 million Covid-19 relief fund to support nonprofit museums in LA.

So if you relish the prospect of recreating El Greco ruffs with coffee filters, 18th-century wigs with toilet rolls, Munch’s The Scream on toast, and Van Gogh’s Self-Portrait with Bandaged Ear using a banana and a bike helmet, follow the Getty’s twitter account.

Check out more inspired submissions from the challenge below: