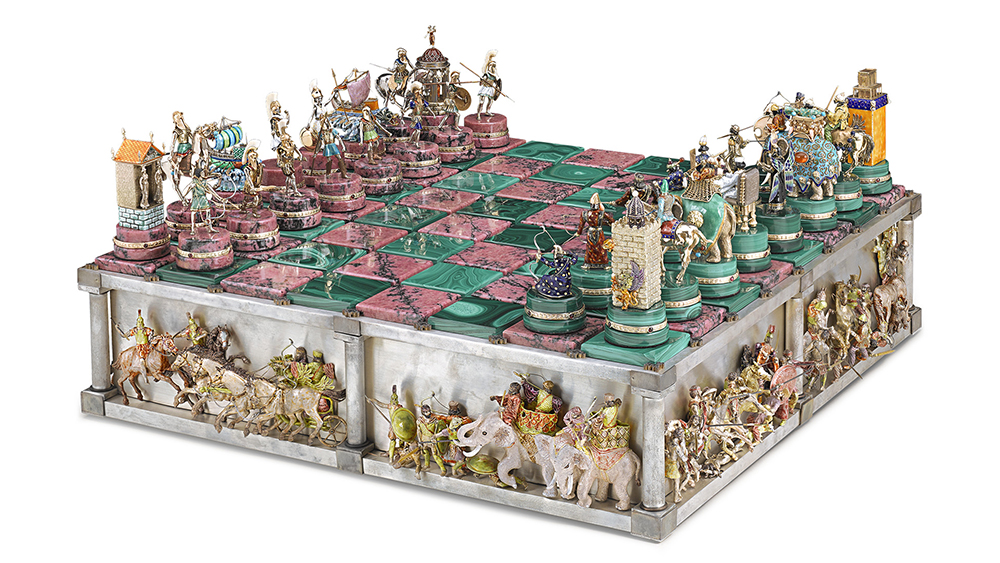 There are chess sets, and then there’s this extraordinary board.

The Battle of Issus, which was just listed by high-end antique dealer M.S. Rau, was meticulously handcrafted over the course of a decade and is an objet d’art in its own right. Legend has it, Ruven Perelman made the one-off in 1992 for his daughter’s dowry. It took the master gemologist a whopping 14,000 hours to complete.

As its moniker implies, the set is based on the ancient Battle of Issus that took place in Anatolia way back in 333 BC. Surrounding the board, there are mini sculptures of archers, horsemen, chariots and elephants depicting battle scenes. Alexander the Great and King Darius are the opposing kings, while Greek goddess Athena and the Persian god of war are the respective queens. For bishops, Perelman designed warships. He also turned the castles into the columned temples of ancient Greece and the Persepolis. There are even horsemen and footmen on the board in lieu of pawns.

A front-facing view of the striking Battle of Issus.  M.S. Rau

The set offers plenty of bling, too. The 14-karat gold pieces are adorned with semiprecious stones and brightly-hued enamel, while the board is made up of pink rhodonite and green malachite squares. Oh, and the sides are pure silver.

To top it off, each piece is equipped with mechanical movement. With a simple twist of the trigger, the battle heroes come to life. Movements include the rowing of a ship’s oars, Alexander lowering his sword, archers drawing back their bows and even horses that shake their manes.

The chess set was “hesitantly” given to the New Orleans-based shop by Perelman’s daughter, according to M.S. Rau.

“It’s in phenomenal condition,” founder Bill Rau told Robb Report via email. “We currently have it on a custom-built pedestal covered by glass.”

You can buy the chess set now online or in-store for $1.9 million.