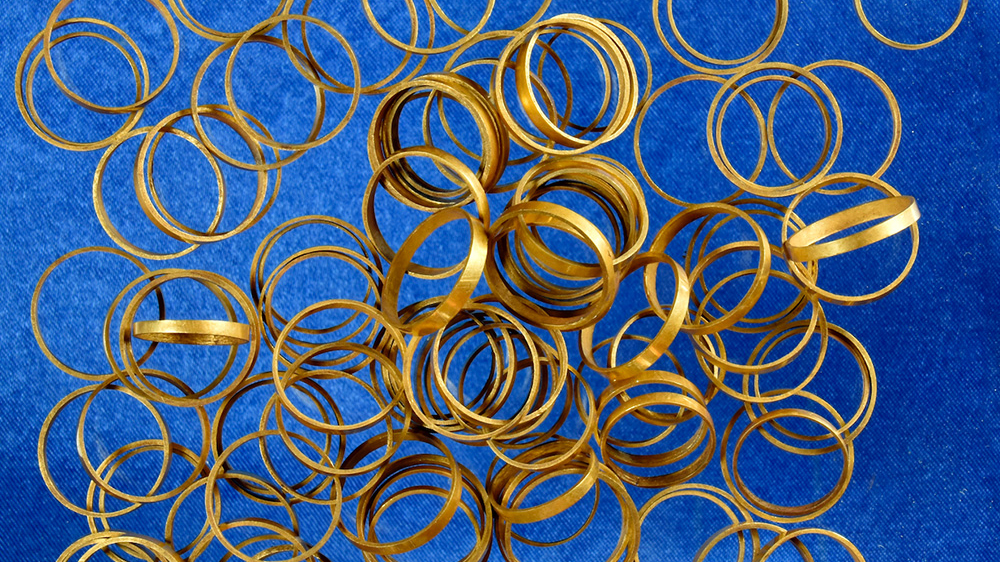 A prehistoric grave containing 169 gold rings was uncovered by archaeologists in Crișana, Romania. Road construction connecting the city Oradea with the A3 highway revealed the find.

The grave belonged to a woman from the Tiszapolgár culture whose hair would have been adorned with the rings. Also found at the site were a multi-spiral copper bracelet, two gold beads, and roughly 800 beads made from bone.

“The gold hoard is a sensational find for the period, considering that all the gold pieces from the Carpathian Basin total around 150 pieces. Well, here there are over 160 in just one inventory,” Călin Ghemiş, the lead archaeologist of the dig, said at a press conference, according to Romanian news outlet Agerpres.

Archaeologists identified the high-status woman based on an initial study of her teeth and overall stature, as well as a lack of weaponry buried in her grave.

The Tiszapolgár culture, dating between 4500 BCE and 4000 BCE, was a Copper Age civilization among Eastern and Central Europe.

“We want to find out what kind of culture the person belonged to, and also whether the rings were made of gold from the Transylvanian Archipelago,” said Gabriel Moisa, director of the Museum of Ţării Crisurilor in Oradea, Romania.

Additional samples from the grave have been sent to laboratories in Romania and the Netherlands for further carbon-14 analysis and DNA testing, while the gold rings undergo conservation and cleaning treatments.

“It is a phenomenal discovery. Such a treasure no longer exists in Central and Eastern Europe,” Moisa added.

Further excavations conducted by the multi-national team from March through June found three sites dating from the Neolithic Period, two from the middle to late Bronze Age, two from the Roman Period, and two from the Middle Ages.

Among more wide-ranging excavations in the area, archaeologists also uncovered traces of two dwellings near the town Sântandrei, with ceramics dating from between the 2nd century BCE and the 2nd century CE. Also found was a Sarmatian settlement near Biharia with a necropolis containing a female skeleton with jewelry. The settlement dates to either the 3rd century CE or the 4th century CE.