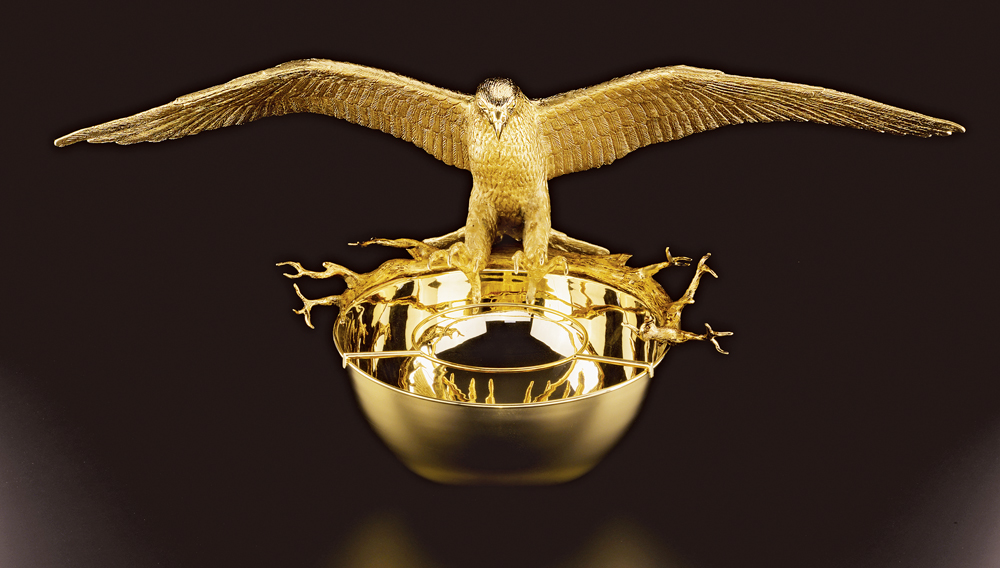 Purists believe that caviar is best sampled on the hand—a technique that invites informality and thus leaves guests without the thrill of ceremony. This point was not lost on Ruediger Benedikt, a Barcelona-based designer who observed the crystal and stainless-steel caviar servers available to private hosts and imagined a sophisticated revision. “I really thought that in order to give it the correct surroundings, something more opulent would be the right way to present caviar,” he says. In this case, that something is the Falcon caviar présentoir ($28,500), a handcrafted, 24-karat-gold-plated bronze creation cast using the lost-wax method. An arduous process dating back nearly six millennia, cire perdue (as the technique is often called) places a premium on quality of detail and individuality, ensuring that every piece is one of a kind. For each commission, Benedikt has clients approve sketches and the final mold—an elegant gesture from artist to patrons, who receive their custom vessel four to six weeks later in a handmade lacquered wooden box. The Falcon présentoir captures the stately grace of its golden subject, which displays an impressive 32-inch wingspan. “The falcon gives me endless inspiration,” Benedikt says. “I love the liberty and speed it represents. I love its majestic presence. It is an animal that is comfortable both in the air and on the earth. It observes its prey some time before it attacks. So what better creature of nature to protect gourmet morsels?” Custom options are also available.