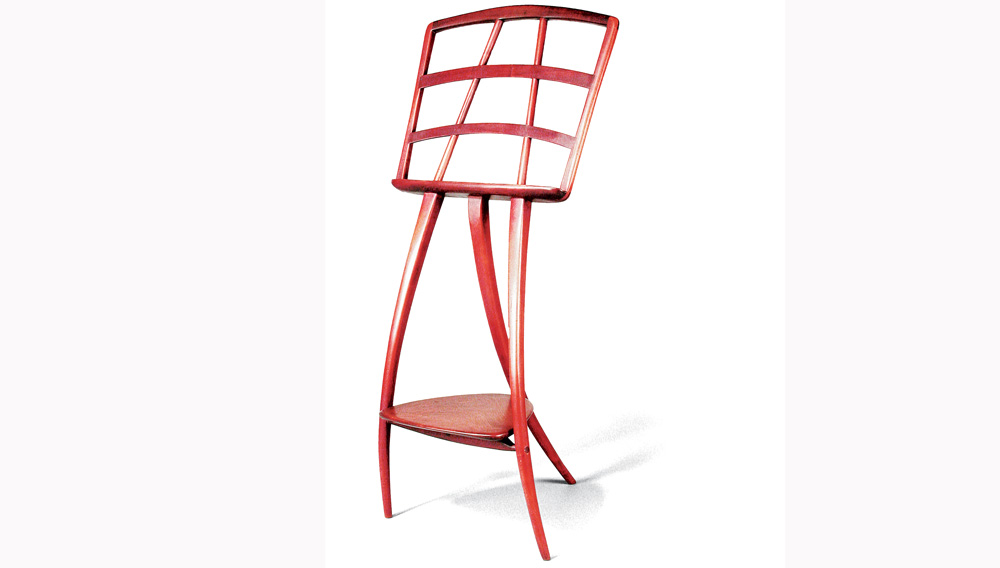 Wharton Esherick’s most famous furnishing is among his works on exhibit and on the market.

When Rose Rubinson asked for a music stand, Wharton Esherick gave her a masterpiece. Rubinson, a Philadelphia Main Line resident and frequent patron of Esherick, commissioned the stand in 1951, a couple years after she first met the craftsman, a fellow Pennsylvanian. The stand was magnificent, and Esherick knew it. “It was intended to be only one, but it was such an incredible design success, he made two more for himself,” says Robert Aibel, the founder and director of the Moderne Gallery in Philadelphia. Eleven years later, Esherick oversaw the production of a limited edition of 24 stands. One entered the collection of the Metropolitan Museum of Art in New York. The original has remained with the Rubinson family and is headlining Wharton Esherick (1887–1970): The Rose and Nathan Rubinson Collection, a selling exhibition of more than 40 works that began in April and continues through September 6 at the Moderne Gallery. The stand, which remained unsold when Robb Report went to press, is priced at $450,000.

Aibel has not mounted an Esherick show since 1996, but not for lack of interest in his work. “It really is impossible to get that many pieces together,” Aibel explains. “I’m not aware of any large collections coming up again. I don’t anticipate another show ever.”

David Rago, a co-owner and founding partner of Rago Arts and Auctions in Lam­bertville, N.J., echoes Aibel’s lament. “I really love this guy’s work,” he says. “The problem with Esherick’s market is there’s just not enough material out there.” In 2006, Rago sold a three-panel folding screen that Esherick made in 1927 to Boston’s Museum of Fine Arts for $312,000. Three years later, it sold a circa-1969 sculpted-top buffet for $335,500.

Examples of his work are rare because Esherick viewed furniture as art, not product. His deliberate erasure of the line that separated fine art from craft gave rise to the Studio Furniture movement, which counts among its luminaries Sam Maloof, Wendell Castle, Arthur Espenet Carpenter, and George Nakashima.

Esherick, formerly a painter, began making furniture in 1920 and remained active until his death at age 82 in 1970. He initially concentrated on surface carving, but by the 1930s, his focus had turned to the sculptural forms of furniture. Aibel estimates that during those 50 years Esherick made about 3,500 pieces, including wood figures.

“When the works come up for sale, they usually come from families,” says Tim Andre­adis, a specialist in 20th-century design at Freeman’s auction house in Phila­delphia. “People have a real emotional attachment to them. Their parents or grandparents knew Esherick, and they have a real respect and reverence for these pieces. They’re like part of the family in some cases.”

As an example, Andreadis cites Essie/Rebecca, a 1933 cocobolo wood sculpture of a standing female that sold in November at Freeman’s for $123,750. The buyer was the Modernism Museum Mount Dora in Mount Dora, Fla., and the consigner was in the room during the auction. “He was in tears at the end of the sale,” Andreadis says. “He really loved and had a deep appreciation for the sculptor that Esherick was.”