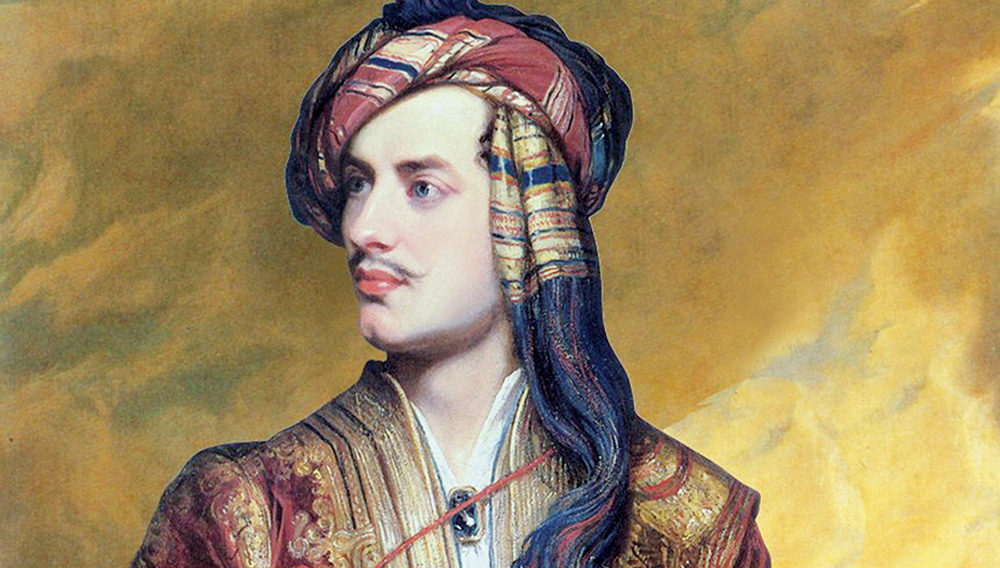 In early July of 1824, the Florida sailed into British waters bearing a curious cargo from the Eastern Mediterranean: a tin-lined coffin containing a cadaver and numerous jars in which vital organs floated lugubriously. For weeks, these remains had served as a point of contention between representatives of Ottoman-controlled Greece and British authorities, who insisted the body be repatriated to England. Upon delivery, however, the contested corpse caused further discord. Westminster Abbey refused to provide a resting place for the casket’s infamous occupant, and the publisher John Murray quarreled bitterly with the dead man’s friends over the deceased’s final manuscript, which, for propriety’s sake, was ultimately committed to the flames of a fireplace.

Thus ended the gaudy grand tour of George Gordon Byron—a restless wanderer whose personal conduct finds its closest parallel in the peccadilloes of his own invention, the fictional Don Juan. Dissipation, after all, was a family métier: Byron’s father, “Mad Jack,” seduced a married noblewoman, by whom he sired a daughter, only to leave her for Byron’s mother, who endured similar treatment. An admirer of Napoléon Bonaparte with a taste for conquest, the handsome Byron embraced the paternal model: By the time he graduated from Cambridge, he had few mysteries left to discover. “My passions,” he later wrote, “were developed very early.”

Though the Napoleonic Wars presented challenges to such undertakings, in 1809, the 21-year-old Byron, anxious to shed English moral conventions, embarked on the first of his adventures, which carried him to Portugal and then Spain. There, the twin prospects of sex and death—the bordello and the corrida—captivated his imagination. Art and life were to him one, and he wrote of the Spanish women, “form’d for all the witching arts of love,” and of the ring, where “foams the bull,” streaming “from his flank the crimson torrent.” He composed a semiautobiographical poem recounting his progress, which led next to Albania—then considered a semi-savage backwater governed by Ali Pasha, a Muslim chieftain renowned as much for his cruelty as for his appetite for young women and young men. Byron, who adopted local dress (pictured), reveled in the attentions of the pasha, who implored the young poet to visit him often “at night when he was more at leisure.” On reaching Turkey, Byron, ever in character, imitated Leander by swimming the Hellespont and, in Athens, took up the cause of Greek independence—an enthusiasm that remained with him to his final days.

The fruit of his exploits, the first cantos of Childe Harold’s Pilgrimage, published in London in 1812, bewitched a war-weary populace eager for escapism and quickly became a best seller. “I awoke one morning and found myself famous,” recalled Byron, who used his celebrity to his advantage in a series of torrid affairs that, as one paramour noted, made him “dangerous to know.” To assuage rumors, he married the well-bred Annabella Milbanke, yet this respectable facade crumbled when his corruption of his half-sister by his father’s first marriage, Augusta Leigh, came to light.

Always more at home when abroad, Byron fled England in 1816. He lived with friends Mary Godwin and Percy Bysshe Shelley in Switzerland for a time and managed there to impregnate a former mistress, Claire Clairmont. Next, he traveled to Italy, where he formed a romantic bond with a married noblewoman, Countess Teresa Guiccioli. After obtaining a separation from her husband, Guiccioli followed Byron to Genoa, but the peripatetic poet grew restless with their domestic arrangement and, in despair over the loss of his friend Shelley, who died in a boating accident, resolved to raise an army to fight for Greece.

As keenly aware of his persona as of his peril, he sent the two volumes of his memoirs to London for publication before keeping his rendezvous with fate. This legacy seemingly secured, he set out for the theater of battle, puffed with quixotic ambitions and attired in a uniform produced by a costume maker from the Italian opera. Yet life, in Byron’s case, refused to imitate his art: Before the first shot sounded, the would-be hero caught a chill and died 10 days later. His body, which he asked not be hacked in combat, was hacked instead during an autopsy; and his epic tale of trysts and travels ended ignominiously in the grate of the man he supposed would preserve it for posterity.