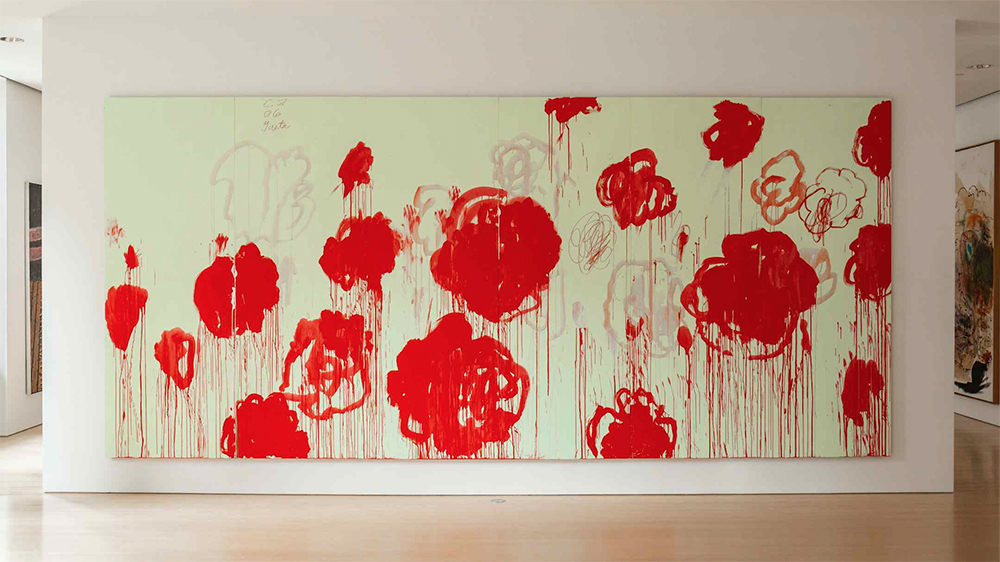 In one of the art market’s most widely anticipated auctions, the collection of divorcing New York developers Harry and Linda Macklowe, will be sold at Sotheby’s this fall. Prime examples of work by Cy Twombly, Mark Rothko, Andy Warhol and Alberto Giacometti will be among the 65 works from the Macklowes’ holdings offered across two designated sales at the auction house’s New York headquarters. The first standalone sale will take place on November 15; the second will be held in May 2022. The collection is estimated in excess of $600 million.

Andy Warhol’s Nine Marilyns (1962), a black and white silkscreen depicting nine repeated publicity photographs of Marilyn Monroe, is estimated at $40 million to $60 million; Cy Twombly’s billboard-sized canvas Untitled (2007) seen above, featuring red flower forms painted on a white background is estimated at $40 million to $60 million; and Gerhard Richter’s painting Seestück (1975), a grey-toned blurry seascape, is estimated at $25 million to $35 million. Works by Brice Marden, Agnes Martin, Jeff Koons, and Sigmar Polke, and other artists will be included in the two sales.

A Rothko painting and Giacometti sculpture from the collection are expected to become two of the most expensive artworks sold at auction this year.  Giacometti’s Le Nez (1947), a bronze sculpture of a bust that hangs suspending in an open steel cage, and Rothko’s No. 7 (1951), a three-color painting featuring stacked blocks of nude pink, chartreuse, and orange, both have estimates upon request. They are valued at around $70 million each.

“This collection was assembled with an unparalleled eye for several decades,” said Sotheby’s CEO Charles Stewart in a press conference announcing the sale, “it will make history as one of the defining moments of the art market.”

Sotheby’s chairman for contemporary art Grégoire Billault said the collection is out of the ordinary, not only for its quality, but due to the fact that it has been kept intact for so many years. “I’ve never seen this,” said Baillaut, “It is a group of works that have been kept together as a proper treasure.”

According to Sotheby’s, the Macklowe sale comes to the market with the highest estimate ever placed on a single collection at auction. It rivals the Rockefeller collection sale at Christie’s in 2018, which made $832 million, against an estimate of $500 million.

News of the sale comes months after art dealer Michael Findlay, the court-appointed receiver overseeing the distribution of the Macklowes’ art collection, decided to postpone the sale of the couple’s holdings in March 2020 due to the onslaught of the coronavirus pandemic.

During divorce proceedings in 2018, a New York judge ordered real estate mogul Harry Macklowe and his wife Linda to sell 65 artworks from their $2 billion fortune and to split the proceeds. Those artworks are said to be worth $700 million. Findlay was appointed as receiver for the art collection in October 2020 amid a contentious 14-week divorce trial between the couple, who had been married for five decades.

Harry amassed his wealth as the founder of Macklowe Properties Inc. The couple started collecting in the late 1950s, and have over the course of several decades acquired more than 150 works. Judge Drager ruled in 2018 that Linda, an honorary trustee of the Metropolitan Museum of Art and a vice president and trustee of the Guggenheim Museum, would be able to keep $40 million worth in art.

Sotheby’s beat out its competitor, Christie’s, to sell the behemoth collection. The grouping carries a guarantee. The works will travel to Taipei, Hong Kong, Paris, and London before coming up for sale in New York.