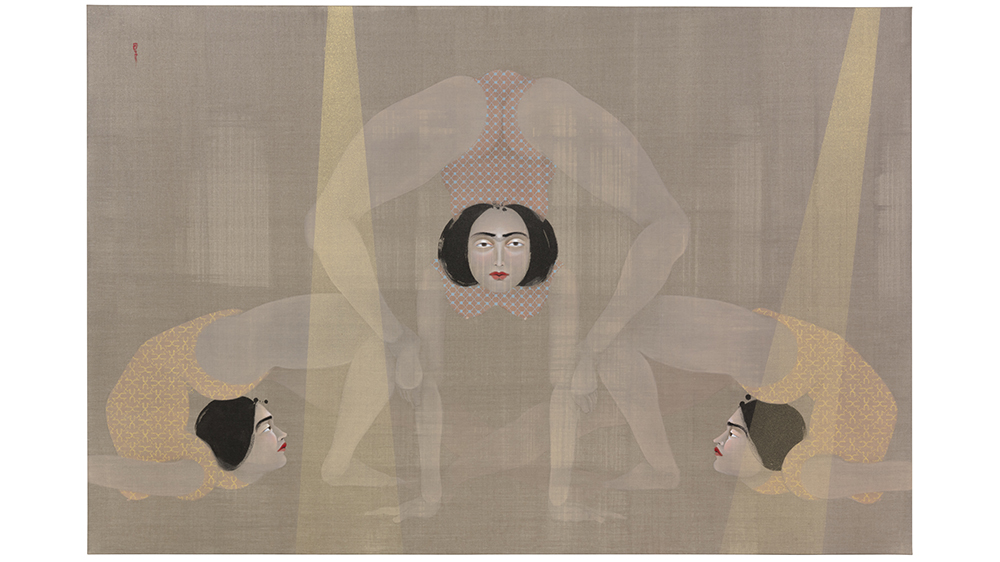 In Hayv Kahraman’s new paintings of female contortionists, women’s heads arch backward to meet their buttocks or thighs; sometimes their bent bodies are piled one on top of another, like a toddler’s stacking toy. As intriguing to Kahraman as their feats, however, are viewers’ reactions to such flexibility: amazement, yes, but also disgust at the figures’ unnatural elasticity. “Bodies can be seen as not human enough,” she says. It’s a potent metaphor for the plight of the “other,” whether racial minorities or immigrants.

The paintings, which will be on view in a solo exhibition at Jack Shainman Gallery in New York opening September 5, evolved from a performance piece Kahraman created last year in LA, her adopted home. Working with a dozen dancers triggered memories of her childhood ballet classes in Baghdad, before she fled Iraq with her family at age 10 in 1992. Kahraman had the ability to dislocate her shoulder and hip. “I used this deformity as spectacle,” she says. “I would show it off and say, ‘Look at me.’ ”

But flaunting physical differences can have the unintended consequence of turning a person into a freak show, a feeling Kahraman experienced as a brown-skinned refugee in Sweden. “The only way I could survive that context and environment was to assimilate—to look at what people want me to be and be that,” she says. “For me, these bending bodies—specifically, backwards—that extreme, almost violent act is reminiscent of contorting yourself and your identity to the majority, to the power.”

The female figures that appear throughout her oeuvre—avatars for the artist—are ghostly transparent in these latest works, save for their thick black hair and bright red lips. Kahraman says she was motivated by her status as an Arab woman and the peculiar, seemingly oxymoronic twin sensations of standing out from a crowd while being certain no one is really seeing her. “I’m interested in how my skin can become super- hyper-visible,” she says. “I feel it every time I land in Sweden—everybody’s looking at me because of my skin, my hair, but I’m completely invisible in terms of who I am.”

While the paintings are large—most are at least five feet tall, some almost nine—Kahraman also plans to include several small-scale drawings of the same motif in the show. The series continues her pursuit of what she calls “archiving memories” to preserve her sense of self. “It’s very urgent for me to recover my biography,” she says, “which I feel is being erased.”