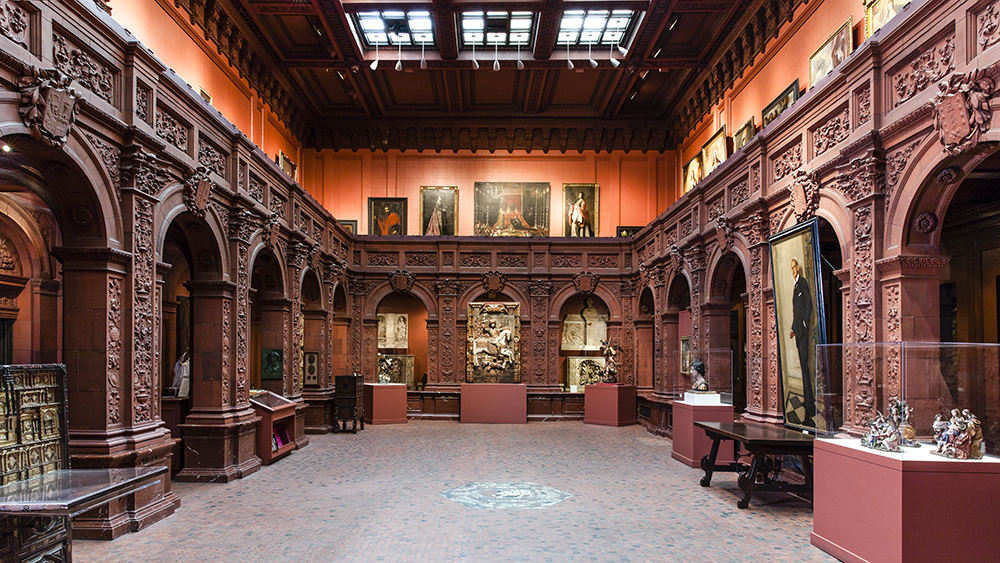 Name the New York City institution with a collection of 750,000 objects—including rare books and masterpieces by Velázquez, Goya and El Greco—founded in 1904 and housed in an early-20th-century beaux-arts building with a grand main gallery awash in terra-cotta.

Stumped? If you’ve never visited or even heard of the Hispanic Society Museum & Library, you’d be forgiven: It’s a hidden treasure in the northern reaches of Manhattan that, prior to small exhibitions in a temporary gallery this year, hadn’t mounted a show in more than a decade. It had become, in the words of its director, Guillaume Kientz, “a closed institution.” But come the first quarter of 2023, the first phase of its multiyear redevelopment masterplan, including an expanded exhibition space, will open to the public.

Kientz, a former curator at the Louvre and Fort Worth’s Kimbell Art Museum who took the helm in 2021, says he intends to mine the full span of the collection—reaching across countries, cultures and periods. “The stories that we can tell are many, [but] the stories that were told in the past were always the same—a great one but always the same one. It was a very static museum,” he tells Robb Report on a recent hard-hat tour of the site. “What we want to do now is have a much more dynamic institution that rotates the collection, tells different stories, tells different sides of the same story, and so on.”

The Hispanic Society’s reemergence is owed in large part to Philippe de Montebello, the esteemed former director of the Metropolitan Museum of Art, who joined the board in 2015 and soon became chairman. Asked if he accepted the invitation with the aim of jumpstarting the programming, he replies, “The answer is a categorical yes. I would have had no interest in joining a moribund institution that intended to remain so. I made it very clear the institution was going to have to change drastically, which it has.”

The society may not have much of a public profile, but if you’re a curator of Spanish or Latin American art, “you can’t not know it,” de Montebello says. “It’s the premier institution.”

To be sure, the Hispanic Society of America, as it was originally called, had an auspicious start. The railroad heir Archer Huntington established it as a way of giving Spain, Portugal, Latin America and the Philippines—and Hispanic heritage in the US—their due. He bought a large tract of land in what is now the thriving Latino neighborhood of Washington Heights, named it Audubon Terrace (after naturalist John James Audubon, the property’s former owner) and donated the construction of buildings there to the society, the Museum of the American Indian, the American Geographical Society and several other institutions. The project became something of a family affair: His cousin Charles Pratt Huntington was the lead architect; Archer’s wife, the prominent artist Anna Hyatt Huntington, created sculptures for the campus; and his mother, Arabella Huntington, an important collector in her own right, encouraged her son’s passions.

A serious scholar, Archer Huntington organized an exhibition of the Spanish artist Joaquín Sorolla in 1909—a blockbuster for its time, with 160,000 visitors filing through in one month, forcing the museum to stay open until 11 pm. The following year, he commissioned Sorolla to paint a series of vibrant murals depicting Spain’s provinces—oranges in Valencia, fishing in Catalonia, dancing in Aragon—to encircle what was then a photo library but “soon became an attraction itself,” says Kientz, who expects similar enthusiasm when the space reopens in 2023, the centennial of the artist’s death. Also on the docket: tributes to Picasso and Jesús Rafael Soto.

For a variety of reasons, exhibitions grew sporadic in the second half of the 20th century, and the society leaned into research. When de Montebello came on board, he quickly proposed a touring greatest-hits show—for both publicity and profit—while the building would need to be emptied for renovation. It bowed to acclaim at the Prado Museum in Madrid, and after several other stops, it will arrive at London’s Royal Academy on January 21 before its treasures return to New York.

De Montebello drilled down to another problem: The Hispanic Society had a cushy first century thanks to its endowment but would need to create new income streams to compete in the modern era. “I said we can’t continue to run an institution with five board members who’ve been there forever, very few of whom have any money at all,” he recalls, noting that fundraising is particularly difficult for an institution that has never sought donations before.

The board has since quadrupled in size. It also created the International Advisory Council (IAC), which now consists of about 35 members, each of whom contributes $10,000 a year. “If you’re good at math, that’s $350,000 a year, a substantial amount,” de Montebello says. “Plus, it becomes a farm team for the board. One of the things I’ve asked the IAC members is to be biblical—I asked them to multiply. If once a year, everybody on the IAC gets one friend to join, you’ve gone from 35 to 70.”

The board tapped Selldorf Architects and Beyer Blinder Belle, along with landscape architect Reed Hilderbrand, to draw up the redevelopment masterplan. Annabelle Selldorf, a maven on historical renovation, is well known for her meticulous work at the Neue Galerie and the Clark Art Institute, to name two, and she’s currently also collaborating with Beyer Blinder Belle on the expansion of the Frick Collection. “She is incredibly good at finding imaginative solutions to keep the soul, the spirit, of the place while making it modern,” says Kientz.

Selldorf, who recalls being “mesmerized” when she first saw the Hispanic Society, describes the project as “the job of a lifetime” and notes, “I very much value rethinking and saving a building that has so much to offer.”

The way de Montebello sees it, the next challenge is persuading the geographically unadventurous to make the trip uptown. “I do think there’s a psychological block that people have about going to 156th Street and Broadway,” he says. “It sounds to them as if they’re going to Vermont, or Quebec.” But from the Met, perhaps still his North Star, he estimates trekking to the Whitney Museum downtown takes twice as long as shooting up to the Heights. “I’ve done both,” he insists firmly. “The Hispanic Society is much closer.”