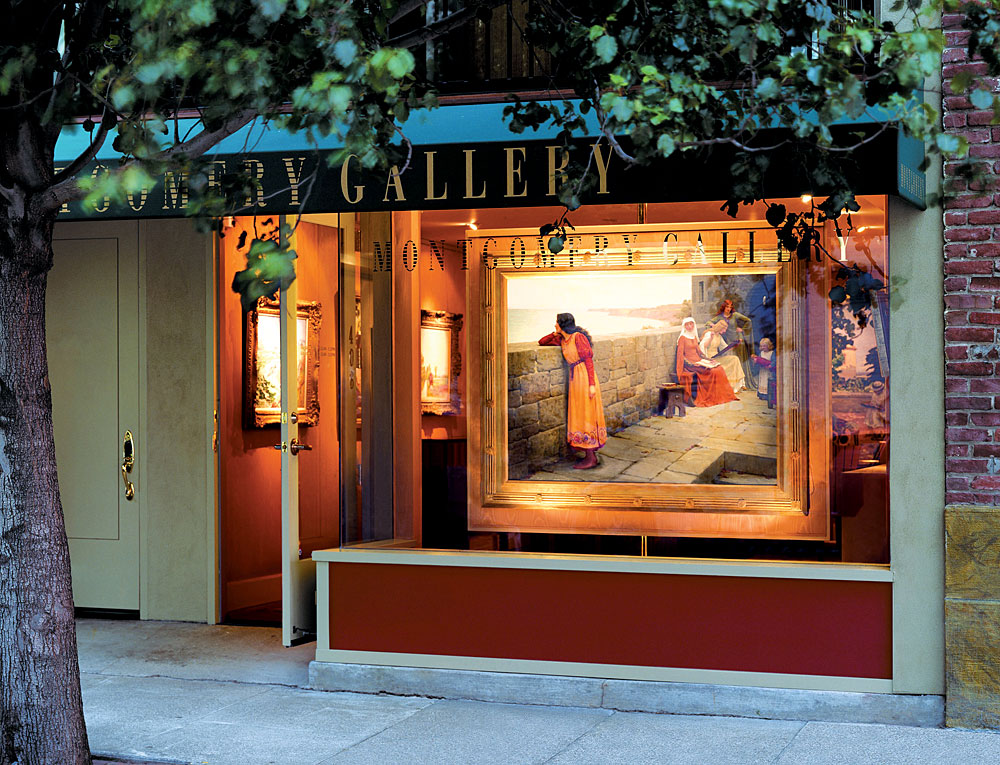 When the silver fund gallery left its longtime San Francisco space near Union Square last February, it relocated to the only neighborhood that seemed right for the world’s foremost source of Georg Jensen estate silver. “With its wealth of knowledgeable dealers and its historic setting,” says the Silver Fund’s manager, Rachel Prater, “Jackson Square was perfect for us.”

San Francisco’s original design enclave, Jackson Square spreads across roughly three blocks just north of the Financial District. It is home to some two dozen prominent galleries and shops for antiques, art, and design, several of which will participate in the prestigious San Francisco Fall Antiques Show from October 23 to 26. “Jackson Square has had a resurgence lately,” says San Francisco designer Jay Jeffers, who visits the area about once a month. “With its trees and old buildings, it feels like I’ve left San Francisco and I’m walking a backstreet in Paris or Antwerp.”

Since the 1960s, antiques have been the mainstay of Jackson Square, where many businesses currently occupy restored 19th-century commercial buildings. Today, specialized dealers cater to serious collectors and knowledgeable designers from across the country looking to source furnishings for clients who prefer one-of-a-kind pieces with history. “We don’t have formula stores here,” says Sarah Stocking, an 11-year Jackson Square veteran who recently opened a larger space for her eponymous gallery of original vintage posters, which include designs by artists such as Mucha and Toulouse-Lautrec. “We’re for people who want more than just a look for their home or office.”

Some of the area’s shops lead their respective fields. For instance, the quality of the antique carpets, textiles, and tribal weavings at Peter Pap Oriental Rugs is exceptional, and Pap himself—who has been in the business more than 30 years—is in high demand as an adviser, consultant, restorer, and appraiser (including regular appearances on PBS’ Antiques Roadshow). Lebreton specializes in French pieces from the 16th century to the 20th; Cadre is the West Coast’s top shop for vintage picture frames; Hedge has broken new ground in sourcing some of the best pieces of mid-century design and displaying them as works of art; and the North Point Gallery’s selection of early California paintings is unsurpassed. Foster-Gwin draws collectors of southern European antique furniture (Italian in particular) from around the United States. “The depth of the dealers’ stock and knowledge is phenomenal,” Jeffers says.

In the Silver Fund gallery’s new space on Jackson Square, spotlights illuminate masterworks from Jensen’s Danish silversmith workshop—from a streamlined Art Nouveau centerpiece bowl designed by Jensen in 1919 to designer Henning Koppel’s biomorphic 1956 “Pregnant Duck” pitcher. A magnificent domed fish platter by Harold Nilssen, priced at $295,000, is one of only two known examples in the world. (Its twin resides in the Royal Danish Collection.)

The Silver Fund shares space with Argentum–The Leopard’s Head, long known for its selection of European and American antique silver. “Between our two galleries, we have four centuries of silver in one place,” Prater says. “In a way, it resembles the collections of other antiques dealers in the neighborhood. It may be quite focused in terms of subject matter, but it’s incredibly deep, which is why people come to Jackson Square in the first place.”