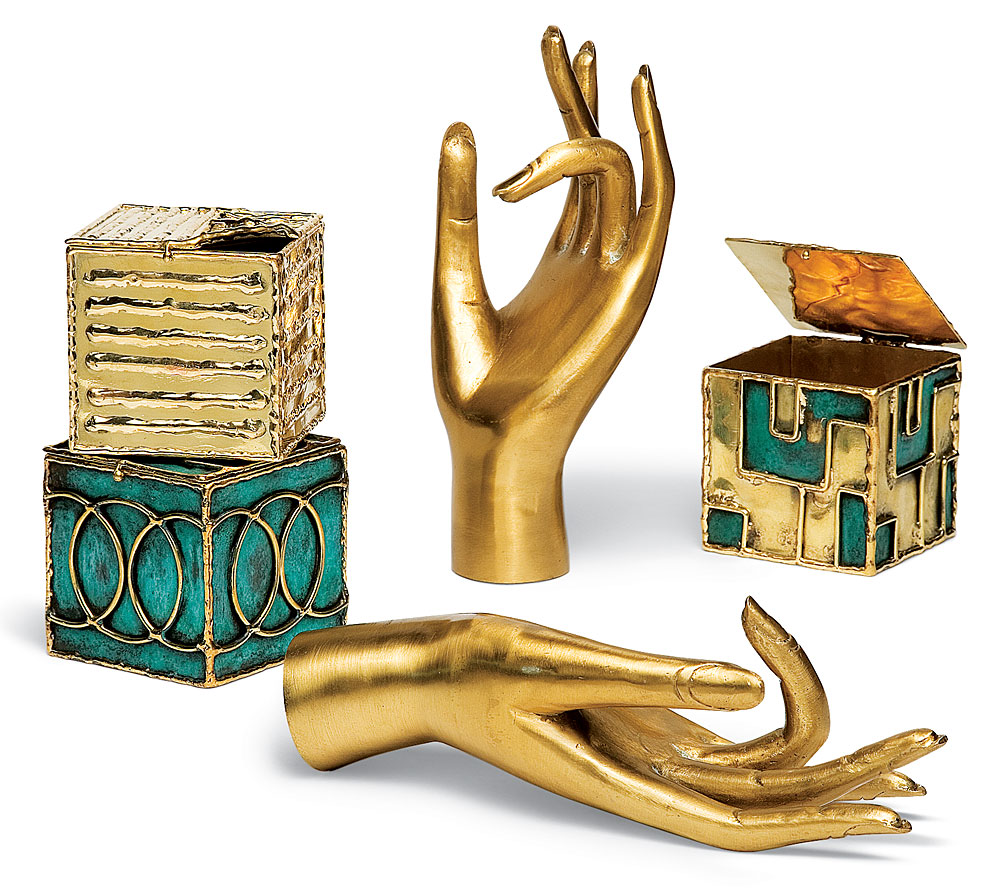 Kelly Wearstler describes the items in her new home accessories line—the interior designer’s first—as “special”; unusual might be an equally apt descriptor. Her most eclectic decorative objects from the collection include a white marble Greek foot sculpture influenced by a 19th-century antique, elegant chrome and brass hands based on a pair the designer found in Thailand, and a staircase statue reminiscent of an M.C. Escher print.

Wearstler, a South Carolina native who owns an eponymous interior design firm in Los Angeles, recently introduced the collection at her new boutique located within Bergdorf Goodman in Manhattan. “I wanted it to look like a jewel box, and it really does,” she says of the 300-square-foot, seventh-floor space, which is adorned with antique silver-leaf millwork and bronze details. The collection’s 75 different designs are displayed in numerous arched, LED-illuminated niches.

The pieces—some of which are being made only in small, limited quantities—include tabletop and larger items made from marble, wood, brass, pewter, stone, and ceramic. Prices range from $125 to $3,500.

In designing the collection, Wearstler says, she “took classic things and modernized them,” creating objects that suit Bergdorf Goodman—”they love bizarre, progressive things”—as well as a variety of room styles. “You can put these accents in a traditional or classic or austere modern environment,” she says, “and they work.”

Many of the designs were influenced by pieces Wearstler obtained during her world travels. A 19th-century European brooch of Wearstler’s, for instance, was grist for a metal tabletop sculpture (available this spring) that evokes a sea urchin, while a vintage square button that the designer acquired at a Parisian haberdashery inspired a stone and brass box that comes in amber, white, or gray. Additional Wearstler creations include a 33-inch-tall marble bust of the Roman emperor Augustus, spiky ball-shaped “kaleidoscope” sculptures in chrome and brass, and an enlarged version of a marble finial—resembling a Grecian urn—that she fashioned for a client’s home.

The best-selling accessories from the fall will be carried over into the spring, when Wearstler will debut new pieces. A handful of these, including boxes covered in semiprecious stones and signed by the designer, will be limited editions. Also forthcoming from Wearstler (through retailers other than Bergdorf) are crystal, china, rug, wallpaper, fabric, and fashion lines.

Those products, like the ones from Wearstler’s current line, likely will fill a gap she often encounters in her interior design work, which, she says, will include more hotels in the near future. (In addition to private homes, her past projects include the BG restaurant at Bergdorf Goodman and the Viceroy hotel in Santa Monica, Calif.) “There are always things I can’t find,” she says. “With the scale and materials needed for hotels, I end up designing a lot of my own things.” Her accessories lines likely will continue to include unique, even bizarre, pieces, from “little trinket boxes” to “42-inch-tall objects,” she says. “There are a lot of things you won’t be able to fit into [Bergdorf Goodman’s] lavender bags.”