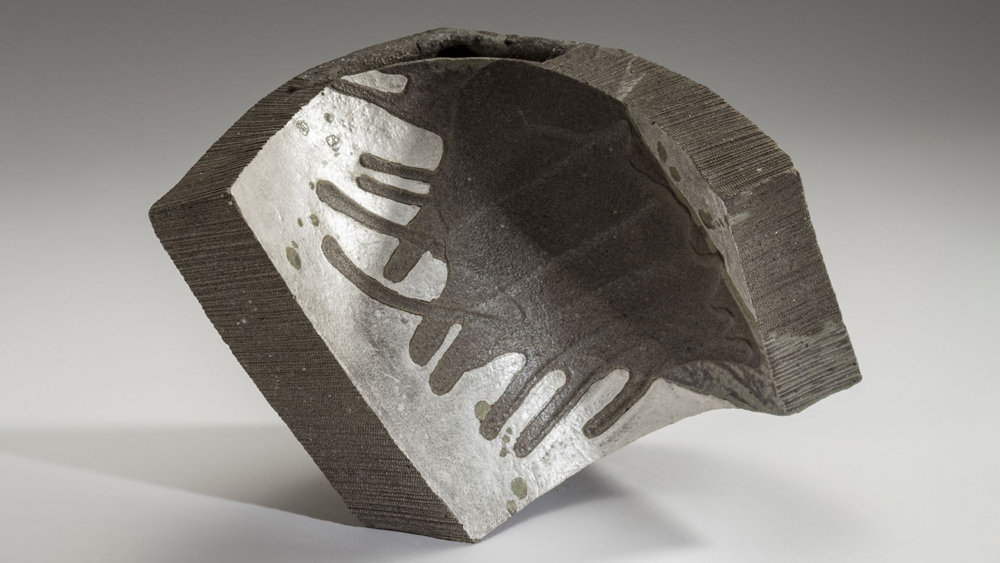 Collectors of contemporary Japanese ceramics have a marvelous opportunity to acquire new works on May 1 when Double Spiral, a selling exhibition of 30 stunning pieces by renowned contemporary Japanese husband and wife potters Hoshino Kayoko and Hoshino Satoru, opens at the Joan B. Mirviss gallery on New York’s Upper East Side. “The exhibition highlights the intertwining physical and spiritual worlds of the couple within their practices, and explores the balance of opposites as represented by the yin-yang taikyokuzu symbol,” says Mirviss of the selection of pottery pieces on offer.

As disparate as their pottery practices are, the Hoshinos are both known to take their visual cues from the local landscape, namely the cragged mountain ranges that surround their home-studio in Shiga Prefecture on Honshu Island.

With their dense concentrations of pushed and pulled imprints, the Kyoto-born Satoru’s smoke-infused vessels are evocative of the Neolithic cord-patterned pottery forms of Jōmon period Japan. His current Spring Snow series features works cloaked in a glisten glaze of white and lapis. In contrast, Kayoko’s angular, wire-cut forms are far more architectural and at once both ancient and modern in their appearance. They’re created from a mix of clays proportionately rich in Shigaraki, a coarse pebbly variety of clay from Lake Biwa, a large freshwater lake in Japan not far from her home-studio. Of particular note is Cut Out—Fan 18–3, an arching vase, and Cut Out—Ring 17–1, a visually arresting form akin to a Möbius strip.

Satoro’s seductive sculpted forms, Mirviss explains, tend to spiral upward with a powerful fluidity, while Kayoko’s austere offerings appear to twist and turn with the apparent rotation of their faceted surfaces. Both artists deftly draw out the unique and earthly tactile nature of clay as a medium. The works on offer by the Hoshinos are priced in the $2,500 to $11,000 range. Double Spiral runs through June 15 at Joan B. Mirviss.