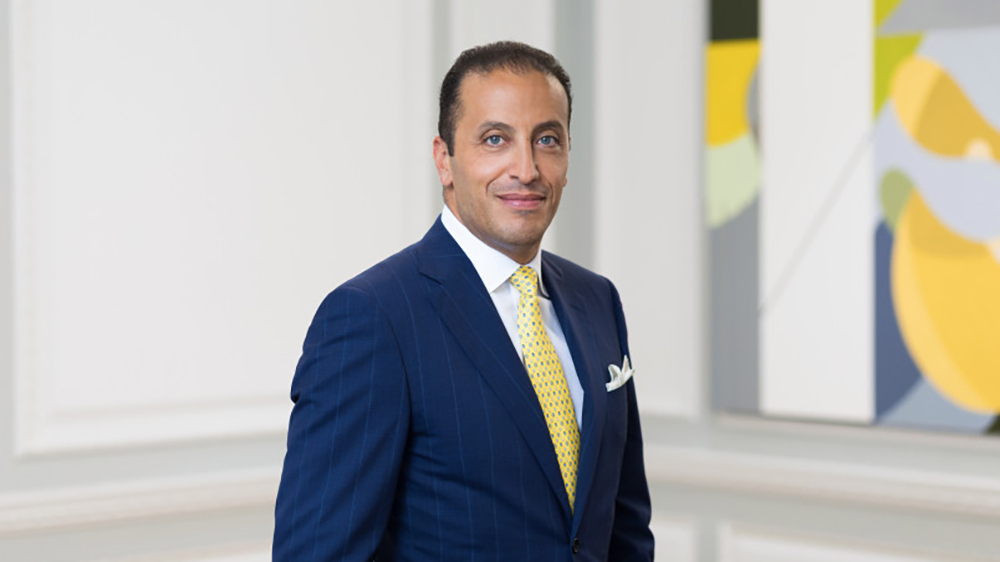 Perhaps surprisingly, Hussam Otaibi’s foremost love is art: collecting it and sharing it with other devotees. “I first bought an artwork in my twenties,” the financier tells Robb Report. “I didn’t know much about contemporary art then—I was just buying something I liked.” A growing fascination with art has followed Otaibi throughout his career. In 2014 he founded a collection and platform called Modern Forms, with British artist Nick Hackworth. Today, he runs the collection alongside Floreat, finding opportunities to bring his two worlds together.

“I’ve always held to one rule: I only buy works that I love,” says Otaibi. “Making investments is my work with Floreat, collecting art is about having a connection with the work and sometimes with the artist as well. I engage with art because it helps me to see the world in a different way.”

Needless to say, with a passion like this, his collection is quite something.

“There’s a degree of irony to the name of our collection, ‘Modern Forms’. For a long time, our culture has been obsessed with ‘the new’, ‘the modern’—the fashion industry is the epitome of this. With Modern Forms we try to find, collect and support the most compelling emerging art and ideas of our moment, irrespective of what’s fashionable.”

“I don’t have a favorite piece, but there are several works that are particularly special to me. One of them is a large hellscape by Jake and Dinos Chapman. I saw Fucking Hell—the first, huge work in the series at the Apocalypse exhibition at the Royal Academy in 2000. My reaction to it remains the most powerful I’ve experienced to a work of art. It stunned me. It was horrific, funny, confusing and completely compelling. So it is especially satisfying to own a major work from the series today. Another work I love is by the French conceptual artist and sculptor Bernar Venet. It’s a large, outdoor sculpture from his Arcs series—a beautiful, elegant work made of curving corten steel beams.”

“One of the first works we acquired for Modern Forms was Samara Scott’s Lonely Planet II. It’s an extraordinary, living work; a collage-cum-painting that sits in a large, shallow tray of water. We installed it in the boardroom of Floreat’s office. We only intended to keep it there for a few months but everyone loved the work so it stayed for over a year. It makes the office an interesting and surprising environment.”

“Simply collecting objects can be selfish. It is important that Modern Forms is not just a collection, but a project about sharing; a collection that explores what is best about art, and that supports the artists themselves. To this end, we’re collaborating with ArtReview magazine on a series of talks to explore the key philosophical ideas of our time. We also support artists through commissions and collaborations with museums or public galleries. Recently we worked closely with the Nigerian sound artist, Emeka Ogboh. We acquired his extraordinary installation The Way Earthly Things Are Going. We donated it to the Tate and supported its display in the Tate Tanks. That was a proud moment—thousands of people saw that work, who otherwise would not have done so.”

“It’s important to give back, if you’re lucky enough to have the resources to do so. Being an artist can be difficult, and supporting talent early on can benefit an artist hugely in the long term. A few of the artists we’ve been focusing on are Charles Harlan, a New York-based artist who makes very elegant, smart works that combine the languages of minimalism and conceptual art, and Douglas White, a British artist who makes very compelling sculptural works with found materials that have an almost magical aura.”

“In recent years, the art market has become increasingly corporate and concentrated at the top. The most famous artists and the biggest galleries are becoming more powerful, while emerging artists and small to medium-sized galleries are suffering. If you’re a collector who loves art, then I think it’s important to support creativity—even in its youngest form. Currently, we’re working with Central St Martins on a project to support artist-run spaces and the artists they work with.”

“When it’s properly appreciated, art helps you to be open-minded; to realize the complexity of the world. It’s a welcome alternative to my everyday work life. The professional world revolves around money, so it’s interesting—humbling even—to meet those people in the creative world who are not driven by profit, but by realizing their artistic vision. I carry that insight into other areas of my life.”