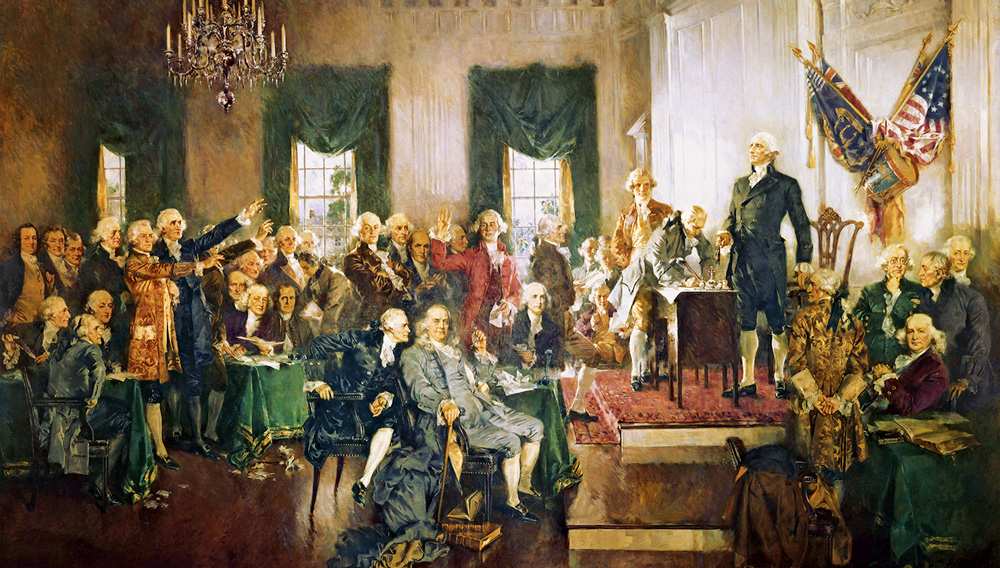 The impassioned document whose composition the citizenry of the United States celebrates this month did not itself inaugurate a new nation. Rather, this concisely incendiary manifesto merely outlined a set of principles that its signatories asserted formed the foundation of good government, before announcing the colonists’ intention to sever ties to the mother country. Not until September of 1787—when delegates from the 13 colonies convened in Philadelphia to revise the Articles of Confederation but instead produced the United States Constitution—did the American revolutionary experiment assume a discernible shape. This audacious instrument, however, did not arise from a unified vision on the part of its framers. Indeed, its dazzling elasticity was forged in a crucible of bitter rivalry that existed among five men: James Madison, Alexander Hamilton, and Benjamin Franklin, all of whom were present in Philadelphia, and John Adams and Thomas Jefferson, both of whom kept their distance from—and keen eyes on—events in the City of Brotherly Love.

Though Hamilton and Madison engaged deeply in the debate during the Constitutional Convention, arguing for a strong central government, their ideas owed much to the philosophies of Adams and Jefferson, whose opinions and ambitions were often at odds. Adams, a staunch Federalist, mingled his republican sympathies with a deep admiration for centralized authority. “Monarchy,” he told a friend, “is the gentlest and most fashionable government.” Fellow Federalist Hamilton agreed with Adams and also advocated an aristocracy. “All communities divide themselves into the few and the many,” Hamilton argued.

Like Franklin, whose suggested motto for the Great Seal of the United States was “Rebellion to Tyrants Is Obedience to God,” Jefferson mistrusted Adams and Hamilton’s monarchical leanings. Still, the Virginian land baron favored men of property: Suffrage should require acreage. He also approved the selection of senators by the state legislatures as a counterbalance to the dangerously demotic House of Representatives. “You are apprehensive of monarchy, I of aristocracy,” Adams wrote him. “I would therefore have given more power to the president and less to the Senate.”

Franklin alone stood for the common people. He preferred a single legislative body and rejected Hamilton’s proposal that the president be elected for life. In the new system, he insisted, “rulers are the servants, and the people their superiors and sovereigns.” Contemptuous of the inventor’s fame and success with women, Adams dismissed the elder statesman. “The life of Dr. Franklin,” he wrote, “was a scene of continual dissipation.” Franklin, for his part, commented that Adams was “sometimes, and in some things, absolutely out of his senses.”

Although each of these Founding Fathers ultimately endorsed the Constitution, some slyly exercised their political influence to remedy its perceived shortcomings. Jefferson accused Hamilton of using the office of Secretary of the Treasury under George Washington as “a machine for the corruption of the legislature.” Adams introduced his own form of tyranny, the Alien and Sedition Acts, which enabled his administration to imprison its critics. Though Jefferson called this law “an experiment upon the American mind to see how far it will bear an avowed violation of the Constitution,” he himself pushed the envelope of presidential power with the Louisiana Purchase—an acquisition that Adams’s Federalists deemed unconstitutional.

Franklin, who died of pleurisy in 1790, was absent from the fray that followed the Convention. “The love of power and the love of money,” he said, ruled most destinies, and the squabbles of his fellow Founders offered little proof to the contrary. His speech in Philadelphia, read by a fellow delegate, anticipated these events, as well as more distant ones. “I agree to this Constitution with all its faults . . . ,” he wrote, “because I think a general Government necessary for us, and there is no form of Government but what may be a blessing to the people if well administered, and believe . . . [that this one] can only end in Despotism, as other forms have done before it, when the people shall become so corrupted as to need despotic Government, being incapable of any other.”