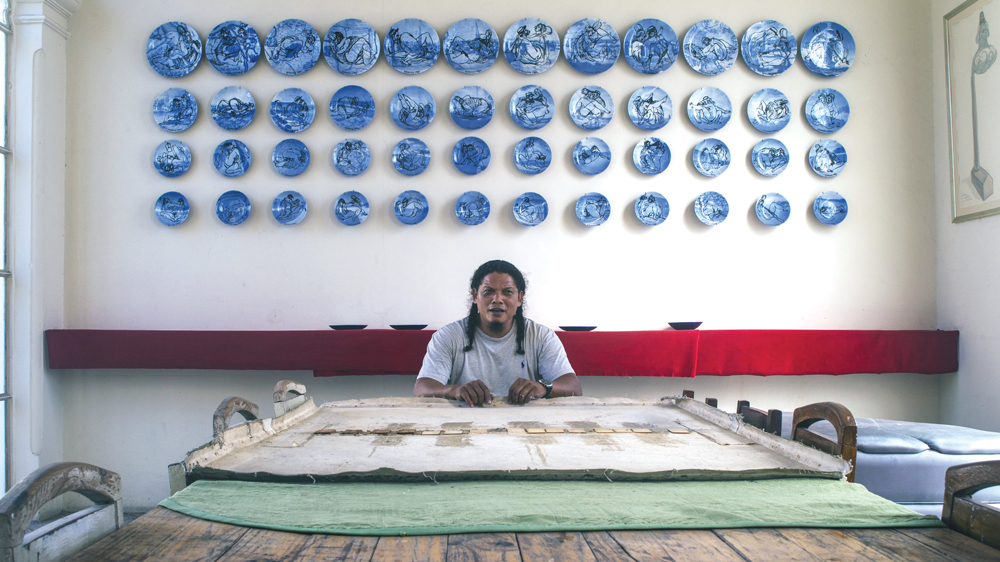 Every night, groups of young habaneros turn up in droves at Fábrica de Arte. The contemporary art space set inside an old factory in the heart of Havana’s Vedado neighborhood is an alternate reality to daily Cuban life, where live trova music and colorful projections of avant-garde films swirl through a warren of galleries. The brainchild of afro-rocker X Alfonso, the venue is brimming with the kind of progress you’d fully expect to miss when visiting this last remaining relic of the Cold War. But on one recent evening, the scene was more modern-day Soho than old Havana: In between the dance floor and bar, the art was as biting as the cocktails, with photographs by local artist Enrique Rottenberg showing shabby bedrooms and startling portraits of women posing half-naked on disheveled beds.

There has been a lot of talk about a “boom” in contemporary Cuban art among international collectors, who now travel to the gritty streets of Havana from London and New York in search of the next rising star. In a sense, it is not Cuba that has changed but the level of attention the art world has deigned to give it. “Havana has always been a wildly creative place,” says Bryant Toth, a New York art dealer who specializes in Cuban art. “It has been hugely vital in music, the visual arts, ceramics, theater, and literature. It was just difficult to showcase it to the world.”

The rich tradition goes back to the 1920s, when Cuban artists like Wifredo Lam were hanging out in Paris with Picasso and Hemingway. But the heyday didn’t last long; everything changed with the Revolution. Under the rule of a young Fidel Castro, art suddenly became another ward of the socialist state. Galleries were the property of the government, art was subject to heavy censorship, and even calling yourself an artist required an official certificate. Canvases were a luxury reserved for a privileged few, as was access to the leader’s “free” art schools and institutes.

Since Raúl Castro introduced his reform in 2011, the tide has turned back, if slowly and unevenly. The first private galleries have opened, young artists have flourished, and the hunt for new talent is on—and a hunt it truly is in this country where Internet is still a rare commodity. “It’s not like New York where you can walk down a street and see a dozen galleries,” says Toth. “You really have to know where to look. You still need to visit artists in their homes and in their studios.”

Though today’s artists are no longer relegated to a clandestine existence, they remain dangling on the fringes of what’s considered acceptable in a country still prone to erratic spasms of censorship. It’s a government-ordained purgatory that mandates only subtle protest—nothing too loud, lest it draw the wrong kind of attention. Such is the case with Rottenberg, whose squalored subjects are an easy reference to the rampant poverty and inequity on the island, yet they are presented without commentary. It’s the same with Adrián Fernández: He makes good use of quiet critique in his photographic series To Be or To Pretend, which highlights floral arrangements in front of dramatic backdrops with an almost cartoonish vividness. But the flamboyant still lifes are a subtle swipe at Cuba’s upper-class: A closer look reveals that these arrangements, which were photographed in the homes of Havana’s affluent families, are fake—cheap knock-offs posing as flagrant displays of wealth.

There are acceptable forms of protest, of course—those that turn the focus away from Cuba altogether. Painter Alain Pino’s use of images of Benjamin Franklin and George Washington from U.S. greenbacks in paintings littered with paratroopers and military aircraft are blatant in their message, yet they keep the finger pointed outward. The artist’s other paintings showing the profiles of President Trump and Chinese President Xi Jinping hidden in silhouette, presumably scheming, are the kind of on-the-nose commentaries that fly well on Cuba’s radar. (Were Castro included in those works, the story would no doubt be different.)

And then there’s the all-out resistance of Esterio Segura, whose studio-home is a must-see for any collector seeking a glimpse into the future of Cuba’s art scene. His private space comprises a series of white-cube galleries filled with sculptures depicting Pinocchios (an overt reference to liars), cages (prisons), and airplanes (exile). But Seguro’s most rebellious work lives in his dining room, at the end of a long table, where the artist regularly hosts dinner parties. There, an entire wall is covered with 48 Glorious Entries of the Victorious Hero into Havana, four dozen ceramic plates painted with detailed images of Fidel Castro making love to Cuba in the form of a woman. Each plate depicts a different sexual position to represent el comandante’s relationship with the country throughout his 48-year rule. The raw blue sketches would be graphic in any country—most certainly this one. And the day it can be exhibited at Fábrica de Arte will truly be the signal of a new era for Cuban art.