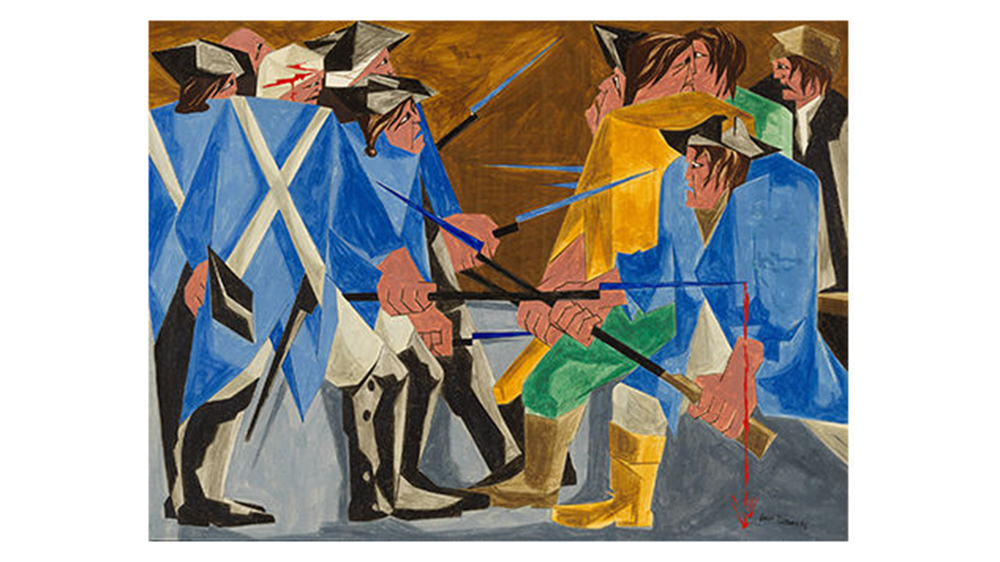 Courtesy of the Metropolitan Museum of Art

A long-long painting by American artist Jacob Lawrence just got the ultimate redemption. After missing for six decades, the work is now on view at the Metropolitan Museum of Art—and the institution has a visitor to thank.

The painting, a panel from part of Lawrence’s 30-piece “Struggle: From the History of the American People” (1954-1956) series, had been missing since 1960.  In a press release announcing the news, the Met revealed that the missing artwork was only found because an unnamed visitor knew their neighbor owned an original Lawrence painting and urged the neighbor to get in touch with the museum.

It turns out that the painting was There are combustibles in every State, which a spark might set fire to. — Washington, 26 December 1786, one of five panels that had been missing from the “Struggle” series. Apparently, the owner came into possession of the artwork after winning it at a charity auction.

The painting is the 16th panel of Lawrence’s series, which depicts important historical events occurring between 1775 and 1817 in his artist’s signature colorful, modernist style. The series, which has not been seen together as a group since 1958, is now part of the Met’s show titled Jacob Lawrence: The American Struggle. The panel depicts a scene from Shays’ Rebellion, an armed uprising by farmers in Massachusetts following the Revolutionary War. Prior to its rediscovery, the only information known about the piece came from a 1956 brochure published before the first showing of the series at the Alan Gallery in New York. The location of the other four missing panels is still unknown.

Visitors look at ‘Jacob Lawrence: The American Struggle’ at the Met on Oct. 17, 2020  AP Images

“It was our fervent hope that the missing panels would somehow surface during the run of American Struggle in New York, the city where Lawrence spent most of his life and where the series was last seen publicly,” organizers Randall Griffey and Sylvia Yount said in a statement. “Lawrence’s dynamic treatment of the 1786–87 Shays’ Rebellion reinforces the overall theme of the series—that democratic change is possible only through the actions of engaged citizens, an argument as timely today as it was when the artist produced his radical paintings in the mid-1950s.”

Lawrence, who lived from 1917 to 2000, was one of the first Black painters to achieve national renown for his art, thanks in part to his 60-panel The Migration Series, which depicted the migration of Black Americans from the south to the north during the first part of the 20th century. Jacob Lawrence: The American Struggle remains on display at the Met until November 1, at which point it will travel to museums in Alabama, Washington State and Washington, DC.