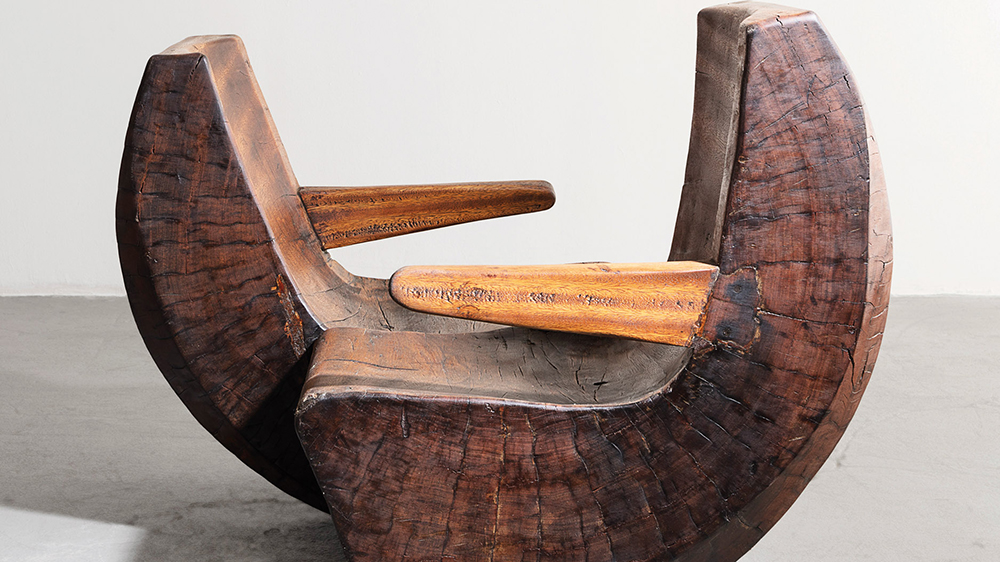 José Zanine Caldas learned from the canoe. Growing up in the Brazilian coastal town of Belmonte, the self-taught designer and architect spent his formative years observing local makers as they carved each boat from a single felled log. Later, that technique informed Zanine’s own craft: creating furniture that reflected every crack, line and grain of the tree from which it came. Today, just over a century after his birth, these remain among the most sought-after pieces in the Brazilian modern canon—a legacy that will be on full display in a solo exhibition at R & Company’s New York gallery through December 28.

The retrospective surveys Zanine’s works between 1940 and 1980, from a never-before-seen sculptural door to the instantly recognizable Namoradeira tête-à-tête lounge chair, with accompanying drawings and photography that offer a glimpse into his creative process.

“It’s a little bit of everything—the idea is not to say, ‘Here’s the masterwork,’ and put it in the center of the room,” says R & Company co-founder Zesty Meyers. “And I like that we’re doing this as it gets colder and darker. There’s such a warmth that comes out of these pieces.” A welcome seasonal antithesis, yes, but the exhibition also serves as a timely environmental message. Though Zanine’s work hinged on cleaving open Brazilian wood, he made every effort to use previously cut logs and would plant a new tree on the rare occasion he was forced to fell one himself. Zanine, who died in 2001, dubbed his creations “outcry furniture,” considering them a form of silent protest against the destruction of local rainforests.

Table base from Protest Furniture series  Courtesy of R & Company

But it’s materiality that makes Zanine’s work so desirable. No two chairs, shelves or tables look exactly the same; one may be made of a slightly lighter wood or have a different texture. Even Meyers, who has a few Zanine furnishings of his own, confesses it will be hard to see the gallery pieces go.

“I’ll want them back,” he says. “But people are hungry for it. His work has reached a larger level of collectability than I ever thought possible.”

Check out three pieces by José Zanine Caldas that are available to purchase below: