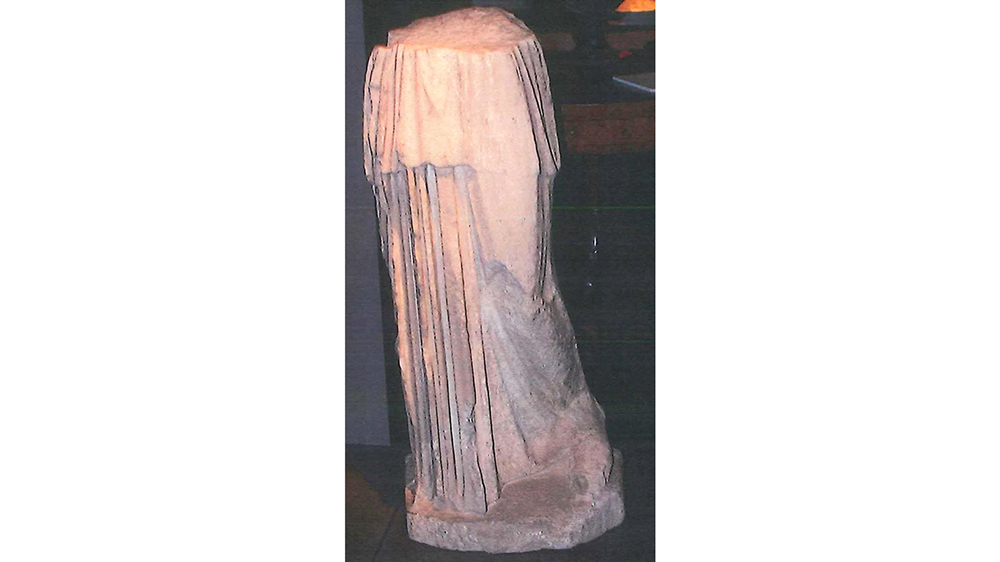 A newly filed lawsuit reveals that, in 2016, the U.S. government seized an ancient Roman statue that was allegedly being delivered to Kim Kardashian.

In the suit, filed on April 30 in the United States District Court of Central California’s Western Division, the U.S. government called for the forfeiture of the “illegally imported” statue, which resembles the lower half of a person draped in fabric. The lawsuit, filed in rem (or against the statue itself), was first reported on Twitter by Robert Snell, a writer for the Detroit News.

According to the suit, the statue had been displayed at the booth of Brussels’s Axel Vervoordt gallery at the 2011 edition of the TEFAF art fair, which offers wares from antiquity to today, in Maastricht, the Netherlands. When the work was seized in 2016 in Los Angeles, the importer’s name was allegedly listed as “Kim Kardashian dba Noel Roberts Trust.” The work is currently held by U.S. Customs and Border Protection.

Speaking to the Daily Mail, a representative for Kardashian denied that the celebrity had bought the work. “Kim never purchased this piece and this is the first that she has learned of its existence,” her spokesperson said. “We believe it may have been purchased using her name without authorization and because it was never received, she was unaware of the transaction.”

The Noel Roberts Trust has previously been linked to Kardashian. In 2014, when Kardashian and her husband Kanye West (the couple is currently separated) bought a mansion in Hidden Hills, California, Curbed reported that the trust was connected to the couple. The trust, Kardashian, and Vervoordt are not listed as defendants in the lawsuit, though the filing claims that their interests may be “adversely affected by these proceedings.”

The government said that it had “two professors with training in archaeology and materials,” as well as an archaeologist from Italy’s Ministry of Cultural Heritage, examine the work after it was confiscated by U.S. Customs. These experts determined that the fragment sculpture is made out of marble and that it may be a copy of an ancient Greek statue; they dated it to 6th century B.C.E. to 4th century C.E. According to the suit, the archaeologist “opined that the defendant statute was looted, smuggled and illegally exported from Italy.”

In 2016, the work was seized after a U.S. Customs officer requested assistance from Homeland Security regarding the statue. The suit claims that “evidence showed that the defendant statue was designated archeological or ethnological material,” and documentation provided by a shipping company proved “insufficient” to satisfy requirements surrounding the U.S.’s Cultural Property Implementation Act from 1983, which forbids the importation of looted heritage.

According to the suit, an invoice attached as part of the statue’s importation to the United States named Vervoordt as the shipper, and documentation provided after its confiscation claimed that Vervoordt had purchased the work in 2012 from Paris’s Galerie Chenel, which listed the work as having come from “Old German collection, bought before 1980.”

But the suit provides contradictory evidence to this, saying that the sculpture on the 2012 Chenel invoice was a whole work and not a fragment, like the work in question. It also claims that Italy’s Carabinieri police force said it saw the statue in Vervoordt’s booth at TEFAF in 2011. The Italian police force “requested that all efforts be made for the return of the defendant statue to Italy in accordance with the bilateral agreement between Italy and the United States.”

In a statement to ARTnews, a representative for Vervoordt said, “We have acquired this piece in good faith from a French gallery who had also acquired it in equally good faith from a German auction house. The former collector was English but precise traces seem to stop there. However, there is no evidence that this piece was illegally imported from Italy. Our client, as well as our gallery and the gallery from whom we’ve bought the piece, have always acted in good faith when dealing with the work.”