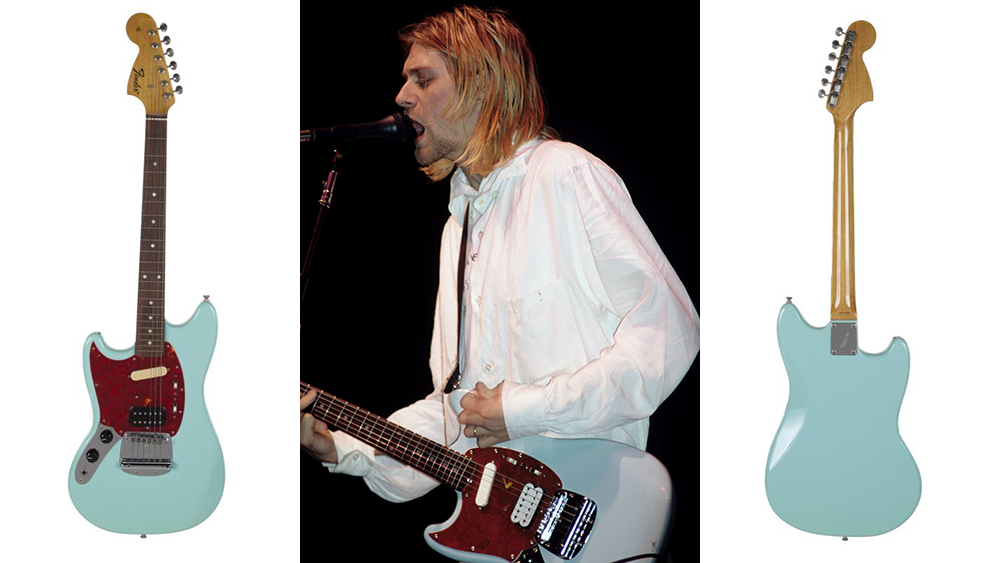 It’s a great time to be a Kurt Cobain superfan with deep pockets. An one-of-a-kind piece of memorabilia tied to the Nirvana frontman, the custom-made guitar he played on the In Utero tour, is going up for auction.

Later this month, Julien’s Auctions will sell a custom-made left-handed Fender Mustang that belonged to and was played by Cobain as part of its Icons and Idols: Rock ‘n’ Roll sale.  A noted devotee of Fender guitars, Cobain specifically commissioned the axe for use on the 1993 to 1994 world tour for the band’s third and final studio album.

The guitar was one of 10 that the Generation X icon ordered for use on the tour, though only six were delivered at the time of his death in April 1994. Built by Scott Zimmerman—who also built the necks for Cobain’s first two Jag-Stangs, a hybrid of the Fender Jaguar and Mustang designed by the musician—the left-hander features a sky blue body and a red mottled pickguard. Dubbed the Skystang III, the guitar was further customized with a black Seymour Duncan JB pickup and a Gotoh Tune-o-Matic bridge.

According to Julien’s, Skystang III was gifted to a fan by Cobain’s widow, Courtney Love, who noted in an accompanying letter that “this was one of his favorite guitars.” Later, it was displayed at the Rock & Roll Hall of Fame, where, at one point, a fan swiped two of its original nobs, though both were replaced by the museum. One of only three surviving In Utero tour Mustangs—the other two are believed to belong to family members—the guitar comes with Love’s letter and the original case with its name written across it. The instrument is expected to fetch between $300,000 to $500,000 when it hits the block on October 25.

But that’s not the only Cobain item the auction house is selling. The ratty green cardigan that the musician wore during the band’s iconic MTV Unplugged performance is going up for auction as well. The sweater, which has not been washed since November 1993, sold for $137,500 in 2015, but is expected to sell for between $200,000 and $300,000 this time.

As exciting as the chance to bid on Cobain’s actual guitar and sweater may be, it’s not the only memento linked to grunge rocker that’s up for grabs right now. The Seattle home that he and Love purchased shortly before his death is also up for sale by realtors Ewing & Clark.

Located in the city’s Denny-Blaine neighborhood, the two musicians bought the Queen Anne-style residence in 1994. The 8,212-square-foot home features four bedrooms and four bathrooms and has been fully renovated in the 25 years since, with the greenhouse where Cobain took his own life having been torn down. With views of both Lake Washington and the Cascade Mountains, the property has an asking price of $7,500,000.