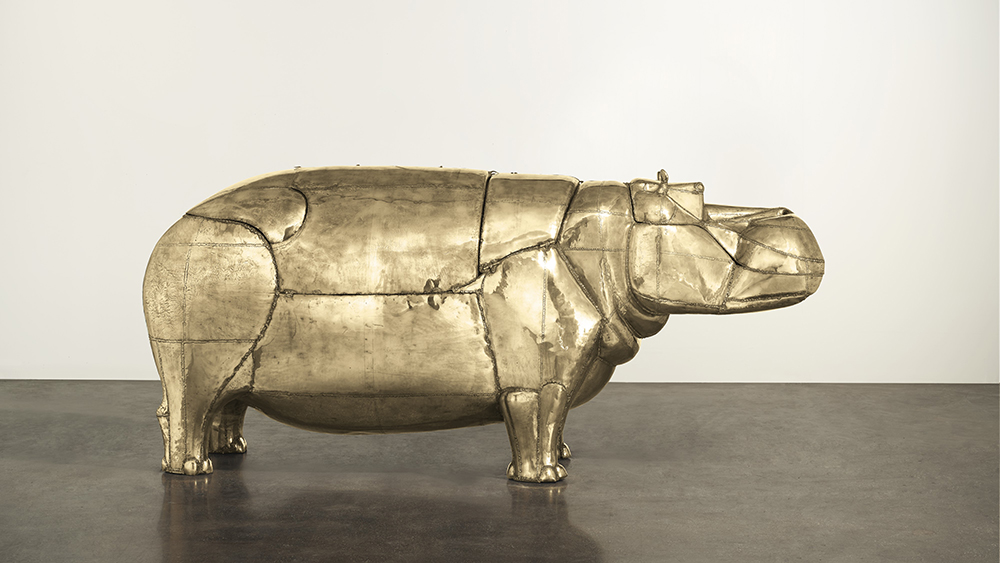 This is certainly one hungry, hungry hippo.

A bronze sculpture of a life-size hippopotamus, which doubles as a bathtub, sold for a gobsmacking $4.3 million at Christie’s New York last night, eclipsing its high estimate by nearly three times.

Crafted by French sculpture François-Xavier Lalanne, the metallic hippopotamus known as Hippopotame I first made a splash in the art scene back in 2006 when it was poached at Sotheby’s New York for a comparatively modest $168,000. Thirteen years on, the seller—who identified only as a Florida resident—has made a 25-fold gain, according to artnet News.

Measuring nearly 10 feet long and 4 feet high, Hippopotame I is anatomically akin to a hippo that you would see in the wild—which usually grow between 10.8 and 16.5 feet long and up to a little over 5 feet tall—it has the same tiny ears, rotund belly and hefty rump. But that’s where the similarities end. This hippo is made of movable parts and is more like a transformer than a herbivorous mammal. When its tail flaps up, panels on its back open up to allow bathers to climb in. It’s mouth can open wide to reveal a vanity and sink.

The hippo sculpture was created in 1969 as a tribute to the animal’s semiaquatic nature. According to artnet News, the sculptor has previously said, “A bathtub and a hippopotamus make a better marriage than a bathtub and a zebra.”  At least some in the art world appear to agree, as the work has garnered praise from collectors and artists alike—not to mention the jaw-dropping auction result.

Indeed, Lalanne and his wife and artistic partner Claude have made a career out of turning the animal kingdom into quirky wares, like a monkey-themed cabinet, a cat bar (above) and a woolen sheep stool. Just last month, Sotheby’s Paris held a sale including 274 items from the Lalannes’ collection. The auction attracted some 4,000 bidders and exceeded its high estimate by four times.