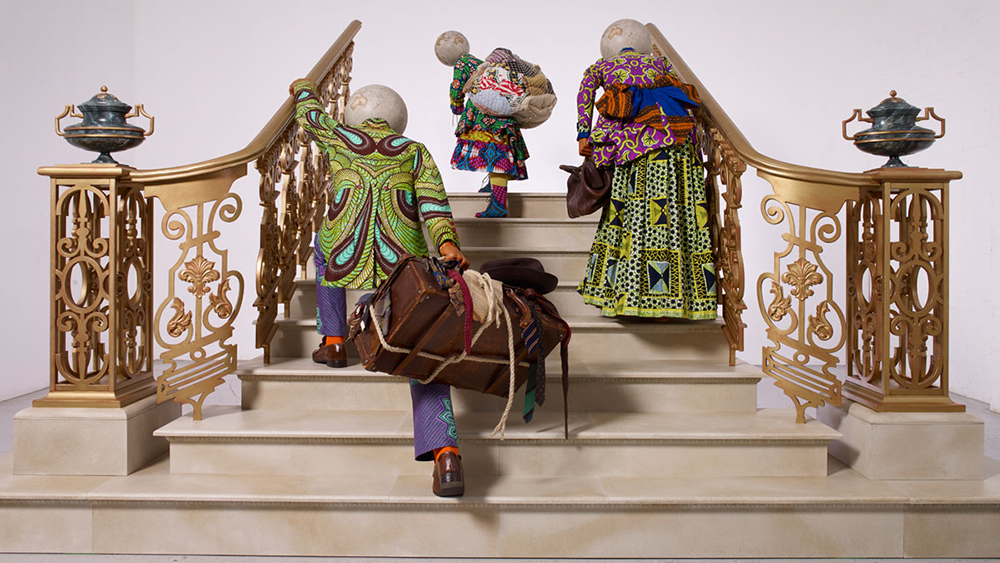 Several large-scale artworks have touched down this week in the Miami Beach Convention Center as part of Art Basel’s US edition, the first to take place since 2019. Taking its name from the imaginary geographical lines that run from north to south, the fair’s Meridians section will present a range of 16 commissioned and historic works by some of today’s leading and most-closely watched artists, including Howardena Pindella, Yinka Shonibare, Maxwell Alexandre, Brendan Fernandes, Todd Gray and more.

“These links of north to south” are a guiding force, said Magalí Arriola, the director of Museo Tamayo in Mexico City who organized the section. “I’m thinking about the context of Miami as a hub between the US and Latin America.”

This iteration of Meridians doesn’t have a theme per se, but it grew out of Arriola’s conversations with galleries about what kinds of large-scale works the artists they represent have created previously or were interested in debuting at the fair. Through those conversations and the works that Arriola eventually selected, a through line emerged. “Some of the main things addressed this year are race, class and power,” Arriola said. “I think it’s very much a result of the social upheaval of last year. There’s a tendency to question the traditional representation of race and how racism can be institutionalized.”

Maxwell Alexandre, Untitled, 2021.  Courtesy of the Artist and a Gentil Carioca/Thiago Barros

Several of the works that are being shown tackle such issues head-on. With Brazil’s A Gentil Carioca gallery, Alexandre will present two new works, part of his ongoing “Pardo é Papel” series in which Black bodies are drawn on brown paper and show scenes of the artist’s experience living in Rio de Janeiro’s Rocinha favela. “The brown paper is a reference to the brown paper that was originally used for identity papers,” Arriola said. “As he sees it, brown paper was used to whitewash the color of skin.”

Presented by New York’s David Lewis gallery is Gray’s Sumptuous Memories of Plundering Kings (2021), a 30-foot photo-based installation work in which Gray has merged various assemblages of image and ornate frames that reflect on the ongoing impact of European colonialism and slavery on Africa and its diaspora. Tunji Adeniyi-Jones (via Morán Morán and Nicelle Beauchene Gallery) and Conrad Egyir (via Jessica Silverman) will each present large-scale paintings—17 and 20 feet wide, respectively—that reference West African aesthetics, iconographies, and visual languages and 20th-century art by Black Americans through different approaches.

Arriola also wanted to approach the idea of what constitutes a “large-scale” work from multiple angles. “The idea is to think about scale not just in terms of size but also in terms time and space to present expansive works that develop over time and over space,” she said.

Nicholas Galanin, The Value of Sharpness: When it Falls, 2019.  Coutesy of the Artist and Peter Blum Gallery

Presented by Peter Blum Gallery, Nicholas Galanin’s The Value of Sharpness: When It Falls (2019) is a sculptural work consisting of 60 porcelain hatchets hung from overhead. The contrast of the powerful tools—often used to stereotypically represent Indigenous peoples—with the fragility of the delftware patterning that they’re made with, Arriola said, offers a “mixing of references” that address “how cultural communities and identities are represented and misrepresented.”

The Meridians section also features Pindell’s mixed-media work Sweatshop (1998–99), one of the section’s few historical works. “Many of the issues that so many artists are dealing with as a result of last year’s social unrest are, in fact, issues that have been pressing for the last 50 or 60 years, if not longer,” Arriola said. “It’s relevant to position these precedents to show how they’re still present. There’s a social urgency that haven’t been resolved.”

One work that addresses both race and forward-thinking ideas of scale will likely be among the fair’s most discussed: Shonibare’s Moving Up (pictured at the top, 2021). The work shows three figures, adorned in luxurious multi-patterned clothing made from 19th-century Dutch Wax textiles, walking up an eight-step staircase with ornate gold railing, each of them carrying various forms of luggage and appearing exhausted and spent. In place where their heads should be are, instead, globes. The work represents the six million African Americans who moved from the rural South to urban cities in other parts of the country as part of the Great Migration. “We’re confronted by these three figures that act as a metaphor for Great Migration, going from south to north,” Arriola said. “There’s this sense of ascension.”