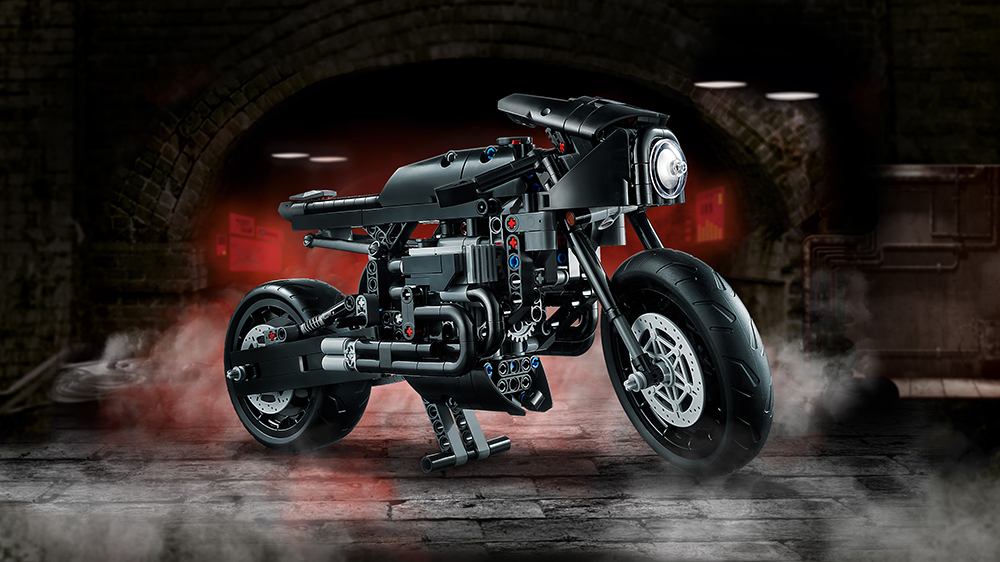 The muscular modern motorcycle that starred in 2022’s The Batman, penned by graphic designer Ash Thorpe, has been turned into a Lego set. Fans of the film will be able to build their own scaled-down versions of the two-wheeler, complete with its exposed powertrain, when the set is available in March.

The 641-piece build is made for kids and adults alike with all the key elements of Thorpe’s stripped-down design, including clip-on handlebars and a quad-pipe exhaust. It measures 6.5 inches high, 13 inches long and 4.5 inches wide, and will become part of Lego’s Technic line that focuses on 1:1 scale sports car models. Like other replicas in the series, ranging from a McLaren Senna to Ducati Panigale V4 R, the Batcycle factors in realistic movement and mechanisms that’ll allow you to recreate some of your favorite Batman movie scenes.

Steering, suspension and a chain drive that connects the articulating H4 engine to the back wheel are the key components that make the Batcycle capable of more than sitting on your coffee table. You’ll need to download the Lego builder app for guided instructions that are designed to create an “intuitive building adventure.” The app’s tools will also help you to zoom in and rotate your Batcycle build—and others—in 3-D, as well as save sets and track your progress for an Alfred-approved result.

Once you’re ready to display your superhero build, the model includes a kickstand it can lean on for support. The toy is the result of Lego and DC Comics’ partnership that was officially announced in 2011 and has since spawned the release of numerous building sets inspired by 13 main characters in the comic book franchise.

Lego’s daring replica of Ash Thorp’s Batcycle for $50 on March 1.