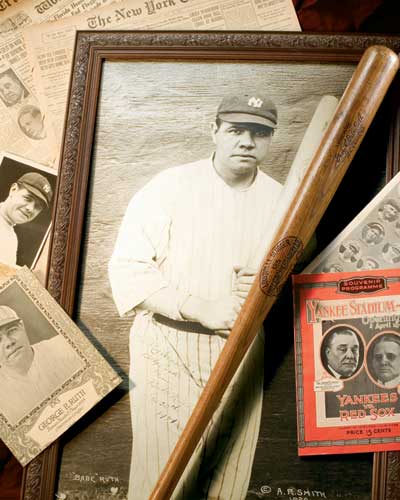 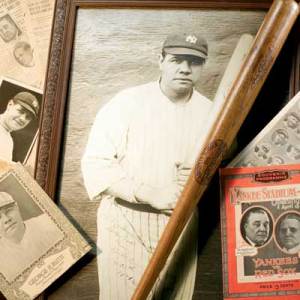 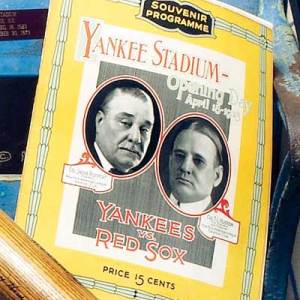 On april 18, 1923, a massive crowd converged upon what had been, less than a year earlier, a nondescript lumberyard in the South Bronx. They ventured to the site, across the Harlem River from the legendary Polo Grounds, to witness the christening of a $2.5 million, three-tiered, state-of-the-art structure dubbed The Yankee Stadium.

Babe Ruth, the hometown club’s 28-year-old right fielder, was coming off of his first disappointing season in the major leagues. After consecutive years in which he amassed previously unimaginable totals of 59 and 54 home runs, Ruth slipped to 35 homers in 1922 and batted .118 in the Yankees’ World Series loss to the New York Giants. The grand-opening game at Yankee Stadium—the first ballpark to be called a stadium—was the Babe’s chance for redemption.

More than 74,000 fans squeezed into the park’s concrete-and-steel grandstands, while outside, another 25,000 hopefuls were turned away at the gates. It was the largest crowd ever to attend a baseball game, and expectations were high. “The Babe was on trial,” wrote John Drebinger in the next morning’s New York Times, “and he knew it better than anybody else.”

Ruth, who stated before the game that he “would give a year of his life” to hit a home run on opening day, failed to reach base in his first at-bat. But in the third inning, with teammates Joe Dugan and Whitey Witt at the corners, the Babe drove Red Sox pitcher Howard Ehmke’s 2-2 change-up deep into the right-field bleachers, becoming the first person to hit a home run at the Yankees’ new ballpark. “The biggest crowd in baseball history rose to its feet,” reported Drebinger, “and let loose the biggest shout in baseball history.”

Ruth went on to hit .393 with 41 home runs that season and win his first, and only, MVP award. That fall, the Yankees defeated the New York Giants in six games to earn their first World Series championship. The season’s most enduring legacy, however, emerged not from the playing field, but from the newsroom. In his report on the grand-opening game (which the Yankees won 4 to 1), Evening Telegram sportswriter Fred Lieb referred to the newly inaugurated Yankee Stadium as “The House That Ruth Built.” More than 80 years and 26 world championships later, the moniker still stands.

This October, the bat Ruth swung to hit his opening-day home run is returning to New York City, where, for the first time, it will be put up for sale. The 45-ounce, autographed Louisville Slugger is the featured item at the Babe Ruth Comes Home: A Celebration of New York Baseball auction from October 2 through 4 in Manhattan. Hosted by SportsCards Plus, a vintage sports memorabilia broker based in Laguna Niguel, Calif., the event will offer baseball-related lots ranging from Mickey Mantle’s first major league home run ball to the 1917 Winchester shotgun that Ruth used on his off-season hunting excursions in upstate New York. Ruth’s most prolific weapon, however, was his bat, and no better example exists. “You can actually see the home run ball mark on the barrel of the bat,” says SportsCards Plus President David Kohler, who once sold a Honus Wagner T-206 baseball card for $325,000. “This is the finest piece we’ve ever handled and the finest piece we will ever sell.”

Kohler’s cherished collectible has been out of the public eye since shortly after its debut. Before the 1923 season began, Ruth made a deal with his Los Angeles–based agent, Christy Walsh. The Babe agreed to donate the bat with which he hit his first home run of the year to promote baseball in L.A., a city still more than two decades away from having its own major league team. Walsh and his former employer, the Los Angeles Evening Herald, organized a contest that would award the bat to L.A.’s high school home run champion. On June 7, in a ceremony that drew national attention, then– Los Angeles Mayor George Cryer presented Victor Orsatti, a scrappy third baseman from Manual Arts High, with the grand prize. The Babe inscribed the bat “To the Boy Home Run King of Los Angeles,” and in a telegram to Orsatti, imparted his approach to his craft: “In my home-run experience I have found a fellow frequently fails when he tries hardest,” Ruth wrote, “therefore send my regards to the ones who tried and congratulations to you for winning.”

Orsatti, who went on to play football at the University of Southern California before becoming a Hollywood talent agent (representing, among others, Judy Garland and Betty Grable), retained possession of the bat until his death in 1984. He willed the treasure to his longtime caretaker, who, after keeping it for nearly 20 years, sold the bat to Kohler in 2002.

The Ruth/Orsatti heirloom is a rarity in the sports memorabilia market. Few autographed Babe Ruth game bats exist in any form, and no other example pertains to such a significant event in his career. Equally important, the bat’s extensive documentation, which traces its story from opening day to the present, is virtually unheard of for a sports artifact from that era. “People didn’t start thinking about documentation until the 1970s or ’80s,” says Eric Beckerman, CEO of Naxcom, a Los Angeles–based online sports memorabilia marketplace. “To have all of this documented from 1923 is uncanny. I’ve never come across an item that has a story like this and a background like this.”

The bat’s condition and provenance could foretell an unprecedented event in the sports memorabilia world. Only two sports artifacts have sold for more than $1 million: Mark McGwire’s 70th home run ball, auctioned for $3 million in 1999, and a Honus Wagner T-206 card that sold on eBay for $1.26 million. “The Wagner card went for over $1 million, and there are 10 of those in existence,” says Beckerman. “There is only one of these bats in existence, so you could be looking at two and a half times that price. If you walked into someone’s house, which would you be more impressed with: a Honus Wagner baseball card or the bat Babe Ruth used to hit the first home run in Yankee Stadium?”

Among the bat’s supporting documents is a letter from the Babe’s daughter, Julia Ruth Stevens, confirming the piece’s authenticity and its significance to her father. “He always considered his home run on opening day at the brand new Yankee Stadium . . . as one of his most cherished moments,” she wrote. “Having such a magnificent stadium . . . dubbed ‘The House That Ruth Built’ was always regarded by Daddy as a special honor. The title also brought a great responsibility.”

Ultimately, that responsibility—and the burden of the press and fans following his every move—took its toll on the notoriously hard-drinking and heavy-smoking slugger. Ruth died of throat cancer on August 16, 1948, at the age of 53. Two months earlier, on June 13, friends drove the Babe to his former workplace and dressed him in his old uniform. Several Yankee greats had gathered, along with a sell-out crowd, to retire Ruth’s number-3 jersey and celebrate the 25th anniversary of the grand opening of Yankee Stadium. His once-powerful frame frail, the Babe hobbled onto the field, leaning on a bat for stability. “Ladies and gentleman,” he addressed the crowd, his voice hoarse from the cancer, “I just want to say one thing. I am proud I hit the first home run here against Boston in 1923. It is marvelous to see these 13 or 14 players who were my teammates going back 25 years. I’m telling you, it makes me proud and happy to be here. Thank you.”

And so the Babe said good-bye to the fans who adored him and the stadium that bore his name. More than a half century later, in an era of big-league ballparks christened by corporate sponsors, the three-tiered structure that rises from the old lumberyard in the Bronx is still The House That Ruth Built.