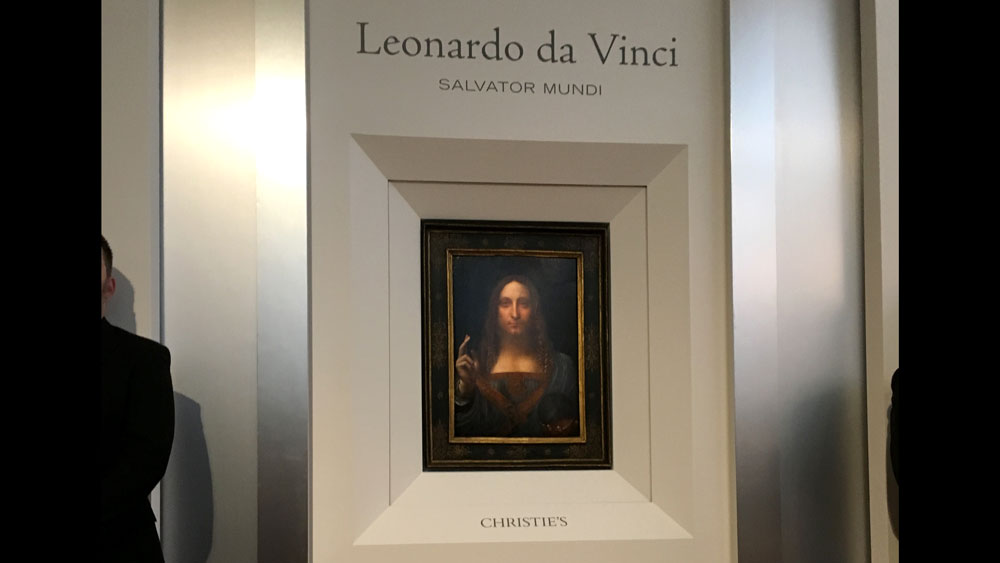 In a maverick move, Christie’s is mixing up its evening sale of postwar and contemporary art in New York on November 15 with the stunning addition of Leonardo da Vinci’s Salvator Mundi (1500). Considered one of the greatest rediscoveries of the 21st century, the rare oil on panel—long thought to have been the work of da Vinci’s disciple—came to light in 2005.

“You have to understand there are only about 15 known paintings of da Vinci’s in existence,” says Loic Gouzer, cochair of postwar and contemporary art in New York, adding, “It is the only one left in private hands. As you can imagine, for auction specialists, this is pretty much the Holy Grail of art rediscoveries.”

“Salvator Mundi [Savior of the World] was long known to have existed, and people have long dreamed of finding it,” says Alan Wintermute, senior specialist in Old Masters, “but everyone presumed it was lost or destroyed.” When it reappeared in a small auction in 2005, he explains, “It was heavily overpainted to the point of being completely obscured such that you couldn’t see the genius of the hand of Leonardo at all.

“It was only when they began to clean it, to remove the old layers of years and years of overpaint, that you could see the great touch of the original Leonardo coming forward. So it was a thrilling rediscovery, and I think people felt that it appeared like a bolt from the blue. But, in fact, it is a painting that is of a long and very distinguished history, and we know quite a lot about it.”

According to Christie’s, the painting is known to have been in the royal collection of King Charles I of England (1600–1649) and is thought to have hung in the private chambers of his wife, Henrietta Maria.

“The painting was inventoried in their collection in 1649, following the execution of Charles I and the queen being exiled,” says Wintermute. Charles left enormous debts that had to be repaid, so parliament decided to sell off his collections. After nearly a decade in private hands, the painting was returned to the royal collection following the restoration of the monarchy under Charles II in 1660.

Leonardo da Vinci’s oil on panel, Salvator Mundi (ca. 1500) heads to the block at Christie’s New York on November 15, after a whirlwind tour that includes stops in London and Hong Kong. It carries an estimate of $100 million.  Photo: Courtesy Christie's

The painting remained in the family until 1763, when it was sold by Charles Herbert Sheffield—the illegitimate son of the Duke of Buckingham—who put it up for auction following the sale of what is now Buckingham Palace to the king. That was the last-known activity of the painting until 1900, when it was acquired by Sir Charles Robinson for the Cook Collection in Doughty House, Richmond.

“By that time,” says Wintermute, “Salvator Mundi had been so badly disfigured by heavily overpainting, it was thought to be a work by Leonardo’s follower, Bernardino Luini—the painting’s origins and illustrious history all but forgotten.”

Following the dispersal of the Cook Collection, Salvator Mundi was ultimately consigned to a sale at Sotheby’s in 1958 where it sold for £45. The painting would disappear once again only to emerge in 2005, when it was purchased from an American estate at a small regional auction house in Louisiana. Its rediscovery was followed by 6 years of painstaking research, conservation, and inquiry to confirm its authenticity. In 2011, Salvator Mundi was presented to the world in the exhibition Leonardo da Vinci: Painter at the Court of Milan at The National Gallery in London, where it caused a worldwide media sensation.

The painting has been consigned to Christie’s by Russian billionaire Dmitry Rybolovlev, who acquired it for a reported $127.5 million from a consortium led by his longtime art advisor Yves Bouvier, who, in turn, had acquired the work only days before through a private sale at Sotheby’s for a seemingly cheap $80 million.

As for the rationale for placing the work in the postwar and contemporary context?

“You have to understand that Leonardo is an artist who’s been in dialogue with every artist who’s followed him—think Warhol, think Basquiat,” says Gouzer. “And, as you know, at Christie’s we like to push boundaries. We like to disrupt things a bit and shake things up.”

Gouzer and Wintermute were joined at the rare “unveiling” event on October 10 by Alex Rotter, cochair of postwar and contemporary art in New York, and François de Poortere, head of the Old Masters department in New York. Salvator Mundi will be sold alongside Andy Warhol’s massive Sixty Last Suppers (1986). The latter is tagged at $50 million.