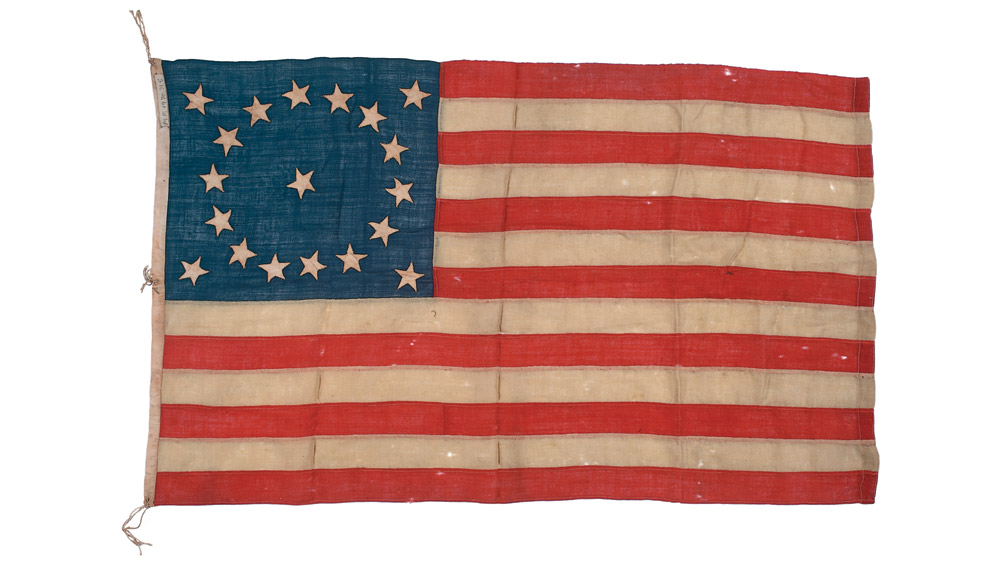 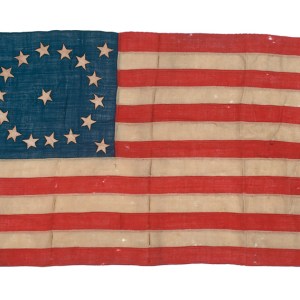 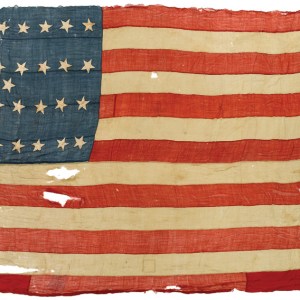 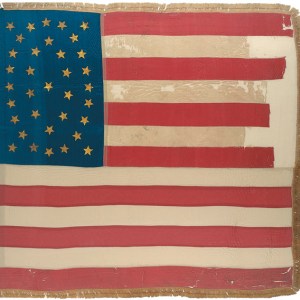 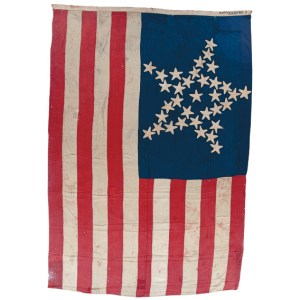 Ben Zaricor collects American history and identity, in fabric form. He owns one flag that has not just been to the moon—it was “postmarked” on the lunar surface with tire tracks. He owns two banners that flew on the presidential limousine on the day President John F. Kennedy was assassinated in Dallas. Most impressive, he owns a stunning array of flags from the days when the 13 states were represented by that same number of stars. And each banner has rich meaning. Call it historical texture.

Over the course of more than 40 years, Zaricor has amassed the largest and deepest collection of American flags, and flag memorabilia, in the country, maybe in the world. David Redden, vice chairman of Sotheby’s in New York, calls it nothing less than “one of the most extraordinary private collections ever put together.” Zaricor buys these swaths of emblematic fabric, and authenticates them, and exhibits them, for reasons more intense than the average collector’s motivation. While every flag tells a story, all of his American flags collectively tell the American story.

“They help us understand our country,” says Zaricor, 66, the former CEO of Good Earth Tea. “They contribute so much richness. We do have a very diverse culture, but at the end of the day, people don’t have to agree on any central point about the flag. It has such a commonality and meaning that individuals can tell their own stories. What I’m collecting is old pieces of cloth, but they’re stories, something meaningful to someone else.”

The core of the collection comprises Zaricor’s eight 13-star flags from the very earliest days of both the banner and the country—and by that he’s talking circa 1777. Many are homemade. As he has written, few Americans realize the flag has been from the outset a statement made by individuals, not the government, “something we use in our everyday lives to express ourselves and our political freedoms. Our flag tells a story of diverse ideas, cultures, personalities, races, and political persuasions,” he says. “It is a story of both differences and unity.”

Redden of Sotheby’s says flags are valuable and collectible for a number of reasons: “You have flags that have evolved over time, and you have flags that represent the early stage of the flag, but I’m more interested in flags that have a fantastic history, where the flag has true power and resonance, recognition that it was a significant part of a historical event—that’s when a flag is extremely valuable.”

“When you talk about provenance and so on, you’re really talking about a flag that tells a story,” Redden adds. “Stories are the best part of these kinds of historical objects. Ben has been very focused on his collection; he is one of these people who tries to get as much information as he can get. He works with academics and understands flags very well.”

The stars and stripes have been static for so long, since Alaska and Hawaii became states in 1959, that it is easy to forget “flag collector” does not connote an investor in endless iterations of the standard 50/13 graphic representation. Zaricor owns flags from the Betsy Ross era and from the Civil War years, too; he even owns an American flag made in Belgium during the Nazi occupation—its maker anticipating the Allied liberation. And the longer Zaricor has been a vexillologist, as a flag authority is called, the more his views and understanding have evolved. He can look at an 1844 drawing of a slave lashed to a flagpole bearing a flag with 12 white and 14 black stars and see a lesson in the American condition: The country was built by slave labor and nearly dissolved over the same issue during and after the Civil War.

In an essay in a book devoted largely to Zaricor’s collection, The American Flag: Two Centuries of Concord & Conflict, Washington University English professor Wayne Fields wrote: “It is tremendously important to go back and look at photographs of domestic strife, domestic demonstrations in every generation, to see that the flag is always there. That the suffragettes are waving it at the beginning of the century, that it leads the demonstrations at Selma and at Montgomery, that there is a constant effort to claim it in its fullest and most inclusive terms by people who have often been excluded in every other statement of who we are.”

In fact, Zaricor traces his fascination with flags to an incident in 1969, when the Memphis native was attending Washington University in St. Louis and saw a hippie beaten simply for wearing a flag insignia in a bar. The indelible scene he witnessed made him realize the power of the emblem. “I was interested in the power of a brand, a brand that had such power that not only were people willing to die for it, they were willing to kill for it,” Zaricor says. “We talk in a noble way about how to save the flag of our country and then really feel proud of ourselves if we kill someone. It made me question the whole idea of patriotism.”

In the beginning Zaricor collected flags from other countries—he and his wife, Louise Veninga, once knocked on a door in the Netherlands and managed despite language difficulties to walk away with a Dutch banner. But by his 25th flag he had come around to the red, white, and blue way of thinking. “The idea of having a flag story is comparable to talking about the weather,” Zaricor says. “Not to downplay it, but you get on the elevator and see a stranger and everyone talks about the weather—it gives people the commonality to talk, and talk in a nonemotional way. That tends to be counterintuitive with flags: You don’t consider what it is you’re collecting; what you’re collecting is the story.”

By now he has easily 3,800 stories in fabric form. Asked how he acquires them, Zaricor responds: “I find them in every way possible you can imagine, from looking for them to not looking for them.” He tilts mystical in conversation, convinced that serendipity plays a huge part. “All along over the last 40 years I’ve somehow come across these flags, possibly by accident or possibly by design.” He buys many at auction, which is how he came into possession of the flag from the moon, which astronaut Alan Shepard “postmarked” with the treads of a lunar vehicle. “As soon as I bought it someone offered me three times what I paid,” he recalls. “Someone put the price close to a million. Is it worth $380,000? I don’t know. It’s sexier than a flag patch [from an astronaut’s uniform], and I’ve got several of those.”

Zaricor will not discuss the value of his collection or how much he has invested in it. But to put it in context, about 10 years ago Zaricor consulted on an auction run by Redden at Sotheby’s, where four Revolutionary War flags sold for $19 million. In the past 20 years, Zaricor has also moved beyond collecting one flag at a time to seeking out full collections. So far he has bought seven museum collections and 11 personal collections, “so I can understand flags in a different way than as a single artifact,” he says.

Zaricor and his wife, who live in Santa Cruz, Calif., keep their own collection in an art storage facility with humidity and temperature tightly controlled. But he still feels as though they live with them, because they are always working on the collection. His main job now is research: About 1,000 flags have been documented, along with a number of quilts with flag themes that his wife has collected. He also has amassed at least 30,000 photographs of flags, which can be used to authenticate histories.

In the last couple of years Zaricor has worked with a software designer to create a program to manage the collection; it documents and tracks flags as they move in and out on exhibit or loan. And he has shown them often, in major exhibitions at the Smithsonian Institution, the Presidio in San Francisco, and other museums. Still, they are easiest to see on his web site, www.flagcollection.com, which has images and background on most of the elements.

Among the highlights of his collection, Zaricor singles out a stained and battle-damaged flag from the USS Arizona: “It has a richness to it that would make it even more important if people could understand what this flag has been through, what it took to survive from the 7th of December until now. The hands that have touched it to keep it going, what’s going to happen to it. Collectors tend to be very good custodians of items.”

He is also proud of the collection he bought from a small museum near Fort McHenry, the site that inspired “The Star-Spangled Banner,” and a flag from the Fourth Louisiana Militia that represents a major unit formed by the U.S. Army as it was getting ready for the Civil War. But there is a magic to the entire collection that cannot be captured by its individual stars.

“It really does talk about us as a people, our national character, but in a way that is so abstract,” Zaricor says. “We all recognize things about this national character we have as Americans because it’s important. I’m hoping this can build national attention to help us understand ourselves as a country.”