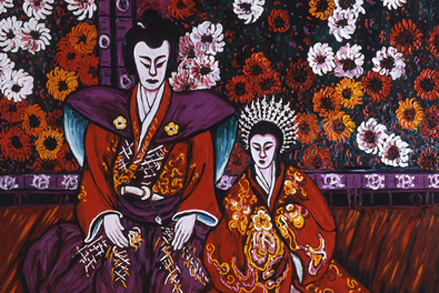 Artist Ana Tzarev returned home to her studio in the South of France from a trip to Japan in 2001, one of the many trips the 73-year-old painter has taken in her almost 30-year love affair with the country, and immediately set to work painting a five-part series based on a piece of traditional Kabuki theater she had seen (one image from the series is shown). Tzarev’s travels are a fruitful source of inspiration for her large, Van Gogh-like paintings, which she says serve as “cultural preservation.” She is passionate about Japanese ceremonial traditions and spends months understanding their historical significance before touching a canvas.

Tzarev’s new two-story gallery on West 57th Street in New York pays homage to her journeys and cultural studies and features paintings referencing her extensive travels through Japan. “Floating World,” which runs from March 12 to May 30, depicts scenes from the artist’s travels, from Kabuki theater to elaborate tea ceremonies, as well as traditional Japanese stories and folklore. “The traditions and ceremonies in Japan seem to be disappearing faster than any other culture I’ve seen,” she says. “I feel responsible to put these memories on canvas.” (www.anatzarev.com)