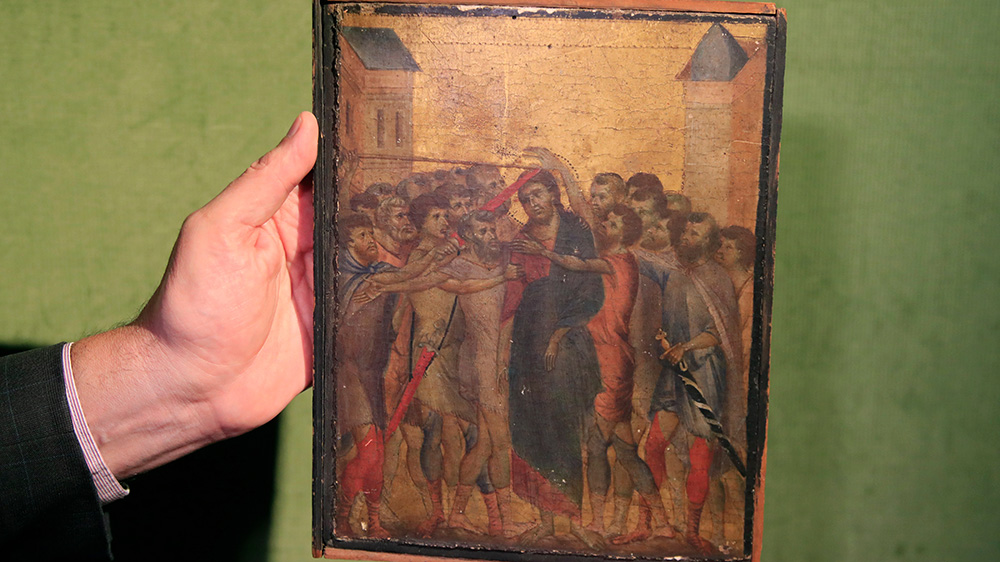 It’s always good to take stock of what you have laying around the house. As one elderly French woman recently found out, you never know when you might be holding onto a long-lost, multi-million dollar painting by an old master.

A medieval masterpiece by 13th-century Florentine artist Cimabue was recently discovered hanging in the kitchen of a woman living in the French town of Compiegne, just north of Paris, reports CNN. Entitled Christ Mocked, the artwork is expected to fetch over €6 million (about $6.6 million) when it goes up for auction next month.

According to the network, the woman had no idea that the 25.8 x 20.3-centimeter painting was rare or where it came from. She reportedly assumed it was nothing more than a Greek religious idol and had it hanging on her wall above a hot plate she used for cooking.

Christ Mocked is one of just 11 paintings that have been traced to Cimabue, who was born Cenni di Pepo in 1240. He is best known as the discoverer and master of Giotto, who’s considered one of the greatest painters of the pre-Raphaelite era. According to the network, the style of painting, gold background and traces of an old frame allowed experts to trace the work back to Cimabue.

“It didn’t take long for us to see that it was an artwork by Italian painter Cimabue,” Jerome Montcouquil, an art specialist at Cabinet Turquin, told CNN. “He’s a father of painting so we know his work very well.”

Still in excellent condition aside from some dust, Christ Mocked is believed to be part of a diptych made in 1280, according to Montcouquil. The eight pieces are said to depict the passion and crucifixion of Christ. Another scene, The Virgin and Child with Two Angels, is held by the National Gallery in London, while another, The Flagellation of Christ, can be found at the Frick Collection in New York.

The painting is the first Cimabue to ever go up for auction. It will be sold by the Acteon auction house on October 27.