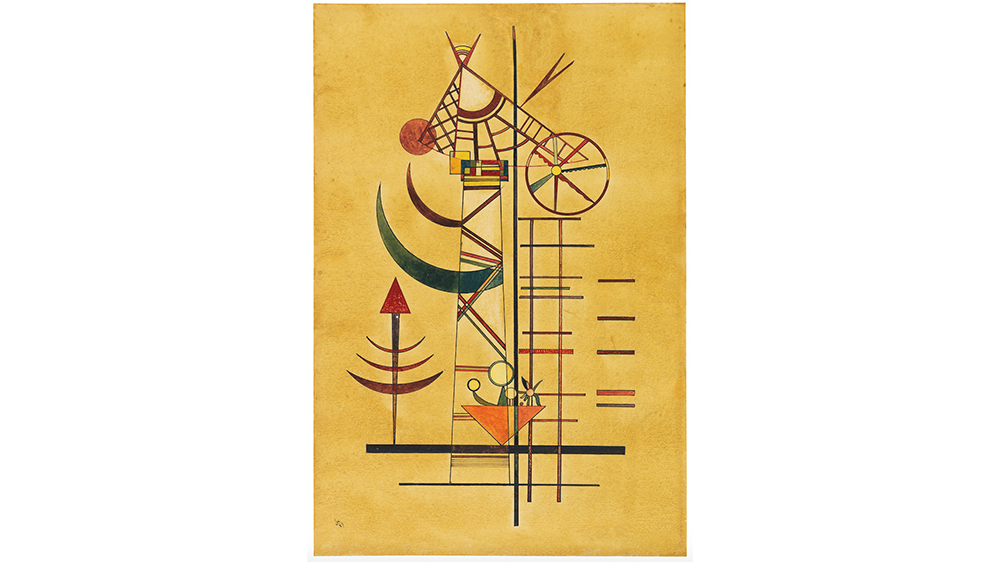 A 1927 watercolor by Wassily Kandinsky, a work whose whereabouts were unknown for 70 years, will be sold at a German auction house next month. Estimated to fetch €250,000–€350,000 ($304,000–$425,000), the work will go on view to the public in Frankfurt starting on May 28 and will then travel to Düsseldorf, Hamburg, and Berlin before landing at its final destination at the auction house Ketterer Kunst’s Munich location, where it will be offered during a modern art evening sale on June 18.

The watercolor, which was painted on a yellow ground and comprises Kandinsky’s signature geometric shapes, comes from the estate of a private collection in Germany’s western Rhineland region.

The work, one of the artist’s prime watercolors, has long been sought after by scholars. In a statement, Robert Ketterer, the auction house’s owner, said, “Many Kandinsky experts did research into the work, however, its exact appearance and whereabouts remained a mystery for decades. The only hint came from the catalogue raisonné of Vivian Endicott Barnett: a tiny sketch made from memory inscribed ‘Location: Unknown.’”

According to the work’s provenance record, Kandinsky held onto the work after making it in 1927 and it was exhibited in the years following at various museum shows in Paris, Berlin, and Stockholm up until 1932. After the artist’s death in 1944, his wife, Nina, sold the work to German art dealer Rudolf Probst in 1949. This was the last time the work’s ownership was recorded until now.

The Kandinsky work will sell alongside a 1917 landscape painting by German artist Lovis Corinth that was recently restituted to the heirs of its original owner, the German-Jewish lawyer and art collector Ismar Littmann, who died by suicide in 1934. His widow was forced to sell much of his collection under duress, though two days before the auction, nearly half of the works were by the Gestapo, four of which were included in the famous “Degenerate Art” exhibition. The Corinth painting is expected to fetch €60,000–€80,000 ($73,000–$94,000).