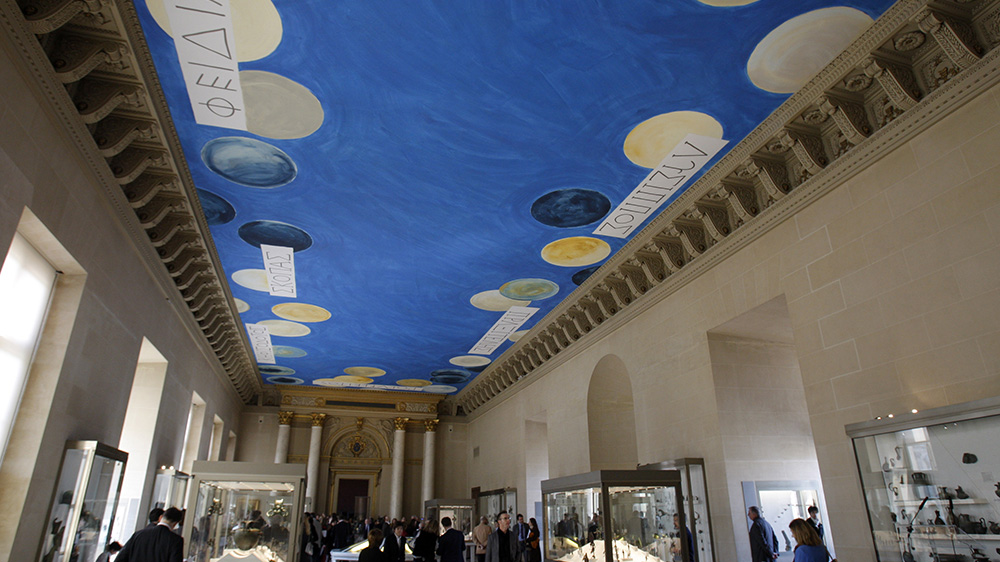 After a renovation of a storied gallery at the Louvre Museum in Paris, the Cy Twombly Foundation has claimed that a monumental ceiling painting by the late artist has been permanently altered, thanks to a new paint job on the surrounding walls and a change in lighting.

In a letter sent by a legal representative to Louvre director Jean-Luc Martinez earlier this month, the foundation alleged that the museum’s recent changes to the Salle des Bronzes, a gallery that is home to 1,000 works of ancient Greek, Roman, and Etruscan art, have reshaped the way a giant Twombly painting called The Ceiling is presented. As part of the renovation, the marble floor was replaced with parquet, and the walls were repainted red, marking a dramatic contrast from their original shade of white. The new Salle des Bronzes gallery is expected to open in May.

The Ceiling, Twombly’s 3,750-square-foot painting for the Louvre, hangs above the room, and was unveiled in 2010. It pays homage to Hellenic sculptors, and its cool blue tones are intended to recall the hues of the Aegean Sea. The painting is one of the few contemporary artworks permanently on view at the Louvre.

“Twombly’s shapes echo some of the forms in the bronzes and the deliberately airy atmosphere of the room can be read as a homage to eternity in art, space and time,” Nicola Del Roscio, president of Cy Twombly Foundation, said in a statement to ARTnews. “The deep red that has been introduced violates these harmonies and entirely destroys the balance of Twombly’s sensitive and memorable installation.”

In its letter to Martinez, which was reviewed by ARTnews, the Cy Twombly Foundation said that, because of the renovation, “the ceiling has lost the delicate and airy atmosphere specific to the artist’s project and is now weighed down by this new and artificial chromatic device.” The result has been “serious damage” and a “violation of the artist’s moral rights.”

The Cy Twombly Foundation is demanding that the Salle des Bronzes be returned to its original state ahead of the museum’s reopening to the public, and in a separate letter that was also reviewed by ARTnews, the foundation called on France’s minister of culture, Roselyne Bachelot, to intervene if the Louvre does not change its display.

In a statement to ARTnews, a Louvre representative said that repainting gallery walls is not uncommon at the museum and that the Salle des Bronzes has not been renovated since the 1930s. “Twombly’s Ceiling has been fully preserved and the artworks remains at the heart of the Greek, Etruscan and Roman Antiquities Department,” the Louvre representative said. “The artist was aware [that] this room, devoted to ancient Greek bronzes, had already undergone several modifications. Nothing in the agreement says that room will remain frozen in its museography.”

The Louvre has been shuttered as a result of the pandemic since October, along with all other museums in France, and a reopening date has not been set. Such closures have been controversial, with many French museum directors demanding that institutions be allowed to start welcoming visitors once more.