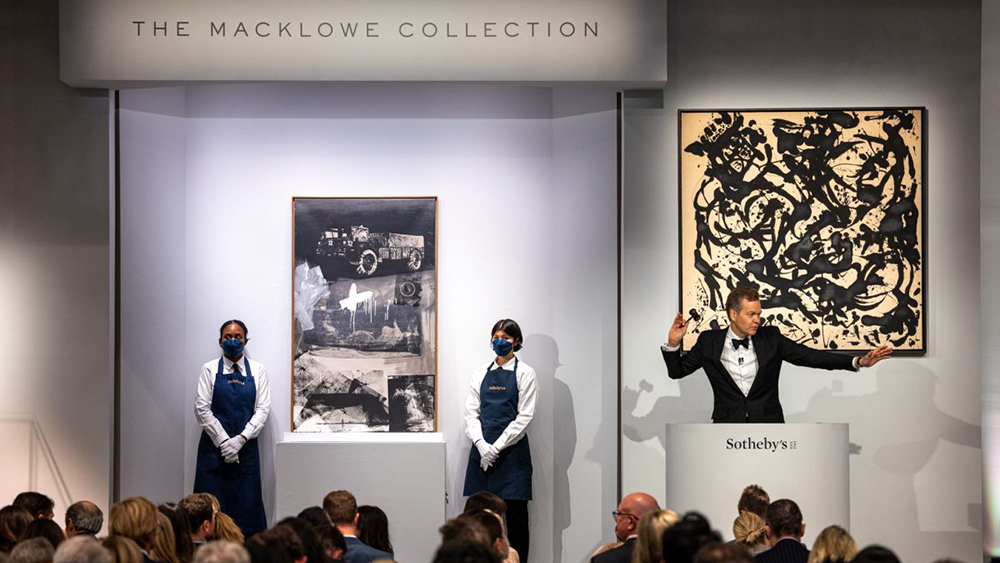 In one of the art market’s most widely anticipated auctions, the first portion of the collection of divorcing New York real estate developers Harry and Linda Macklowe fetched a collective $676.1 million at Sotheby’s on Monday evening in New York.

The entire grouping of 35 works was backed by the auction house with a guarantee, with each lot sold by the sale’s end. Twenty-one lots came to the sale with irrevocable bids. The group of works soared over its estimated haul of $439.4 million–$618.9 million. It was the first swathe of 65 total works from the Macklowes’ holdings—which are being sold as part of a court order issued during the couple’s divorce proceedings— to be offered at the house’s New York headquarters. A second standalone sale devoted to the remaining works is set to take place in May.

Sotheby’s veteran auctioneer Oliver Barker took to the rostrum on Monday to lead the sale, which lasted an hour-and-a-half. Taking place in the auction house’s York Avenue sale room on the redesigned stage, a tightly packed room full of audience members attended. Pace gallery’s Mark Glimcher and London dealer Francis Outred, as well as art advisor Jude Hess were present. The energy in the room among specialists and onlookers was tense, as pressure mounted over the postwar trove that had been keep together for nearly five decades.

Among the works that fetched the highest price was Mark Rothko’s No. 7 (1951), featuring stacked blocks of nude pink, chartreuse, and orange sold for $82 million. Coming to the sale with an irrevocable bid, it hammered at $77.5 million, going to a bidder on the phone with Sotheby’s chairman of Asia, Patti Wong, who triumphed over a New York bidder to win it. It is the second most expensive work by Rothko to sell on the open market. It nearly exceeded the abstract expressionist’s auction record of $86.8 million, set in 2012 when Orange, red, yellow (1961) sold at Christie’s.

A bronze sculpture by Alberto Giacometti titled Le Nez (1947), of a bust with an elongated nose that hangs suspended in an open steel cage sold for $78 million. Just two bidders on the phone with David Schrader, head of private sales and a representative from the house’s chairman’s office in Hong Kong, Yonnie Fu, competed for the work. It hammered with Fu’s client at $67 million, below its high estimate of $70 million.

A second record was set for Jackson Pollock, whose Number 17 (1951), a black spattered painting on a beige canvas, sold for a staggering $61 million, more than double the $25 million estimate. It exceeded the artist’s previous auction record of $58.4 million, set in 2013 for Number 19 (1948) at Christie’s New York. Additional artist records were set for Robert Irwin and Michael Heizer.

Another big-ticket item that came to the sale with an irrevocable bid was Cy Twombly’s billboard-sized canvas Untitled (2007), featuring red flower forms on an off-white background. The painting exceeded its $40 million high estimate, selling for $58.9 million and going to a bidder on the phone with Sotheby’s Mexico City office representative Lulu de Creel. Andy Warhol’s Nine Marilyns (1962), a black and white silkscreen depicting nine repeated publicity photographs of Marilyn Monroe sold for $48.5 million, against an estimate of $40 million.

One of the most suspenseful bidding spars of the night was for a work by Agnes Martin. The long-undervalued artist’s untitled white-striped canvas from 1974 made 3 times its low estimate of $6 million, finding a buyer on the phone with Wong for $17.7 million with premium. She triumphed over New York specialist Bame Fierro March’s bidder for it. That sum exceeded Martin’s auction record of $10.6 million, which had been set back in 2016 when her monochrome canvas Orange (Grove), 1956 sold at Christie’s New York.

Among the more irreverent works from the collection that outpaced expectations was Phillip Guston’s painting Strong Light (1976). Depicting two sets of entwined legs illuminated by a green bulb sold for $24.3 million to a last minute bidder on the phone with Sotheby’s head of contemporary art sales in Hong Kong, Alex Branczik. It made four times its low estimate of $8 million. Warhol’s electric blue painting Sixteen Jackies (1964), a grid of 16 vignette portraits of Jackie Kennedy sold for $33 million, double the estimate of $15 million.

The $600 million Macklowe sale came to the market with the highest estimate ever placed on a single collection at auction. It is on track to rival Rockefeller collection sale at Christie’s in 2018, which made $832 million, against an estimate of $500 million.

Despite some doubt that the market would embrace postwar works that have fallen out of demand among today’s top collectors and institutions, the Macklowe collection sale exceeded expectations. According to market experts, it is the fact that the collection had been kept intact for so many years, boasting a provenance record tied honorary Metropolitan Museum of Art trustee, Linda Macklowe, that allowed the works to prevail on the auction block.

Though long periods of intense bidding between New York and Hong Kong muted the atmosphere throughout the sale, Barker explained the evening’s dynamic was driven by, “very considered bidders.” It is that level of discernment with which the collection was put together, New York art advisor Erica Samuels observed, that was also reflected in the night’s bidding. “The time we’re in right now is art as an asset class. The best in class are lifting the highest,” she said. “Quality triumphs.”