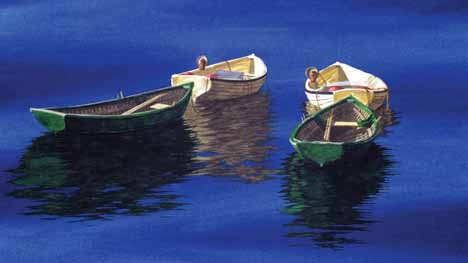 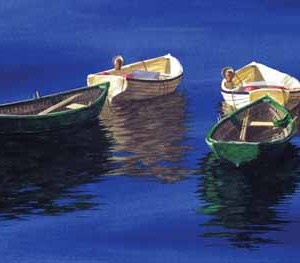 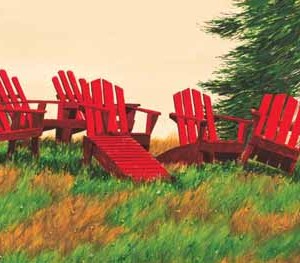 Artist Barbara Ernst Prey, a native New Yorker, finds inspiration for her large-scale canvases in a small fishing community in Maine. Thirty of these bright watercolor paintings will be showcased at an exhibition July 25- August 16 at the Blue Water Fine Arts gallery in Port Clyde, Maine. Barbara Ernst Prey’s Earth, Sea, Sky: 25 Years Exhibiting in Maine will include both large and small canvases, as well as a selection of prints from her series of landscape paintings.

The artist’s favorite painting in the exhibition, Community Supper, portrays the spirit and meaning behind her work. “It’s a perfect example of the town spirit,” says Prey. “The community dinner was something that really took place, to help the family of a fisherman who was killed at sea. That’s something you just don’t see in big cities.”

Prey’s work hangs in the Smithsonian American Art Museum, the Brooklyn Museum, and at the Kennedy Space Center, where her commission for NASA is showcased. She was recently appointed by the President to the National Council on the Arts, the advisory board of the National Endowment for the Arts. The retrospective in Maine is her second such exhibition; the first was held in Paris last year. (www.bluewaterfinearts.com, www.barbaraprey.com)