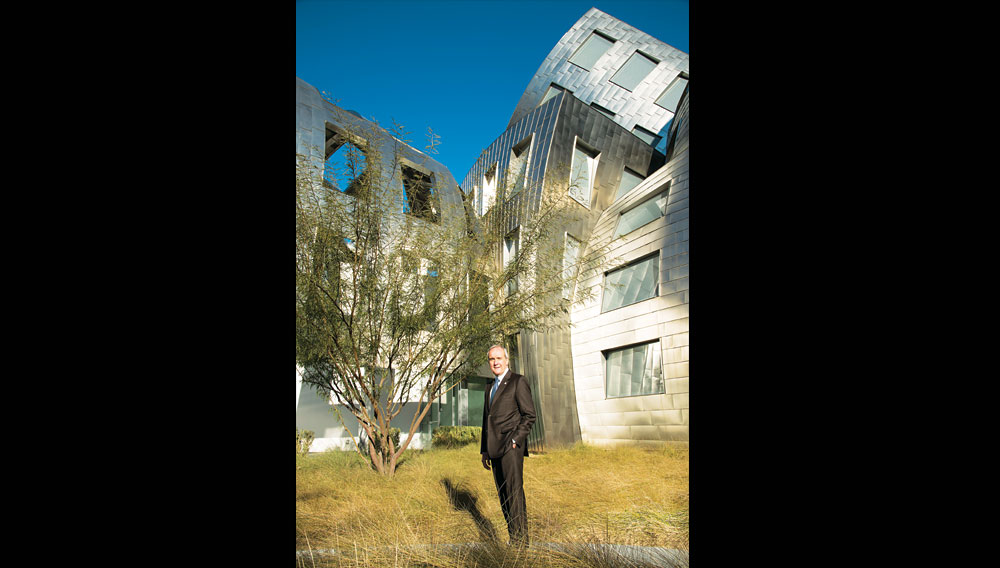 In February 1995, on the one-year anniversary of his father’s death from Alzheimer’s disease, Larry Ruvo—who directs Southern Wine and Spirits of Nevada, the largest distributor in the state—gathered 35 friends for a private dinner at Spago on the Las Vegas Strip to laugh, reminisce, and, as he put it, “tell Lou Ruvo stories.”

For 43 years, Lou Ruvo and his wife, Angie, ran the Venetian Ristorante, which was a cozy, moderately priced Italian restaurant on West Sahara Avenue. “My father was well-liked in this town,” says Ruvo. “He was a handshake guy. He was the man who made a phone call to get somebody a job. He would loan you money if you needed it.”

The night wore on, and the Mondavi and Antinori flowed freely, as did the fine Scotch whiskeys and Cognac that Lou Ruvo had so enjoyed. Late in the evening, John Paul DeJoria—co-founder of the Paul Mitchell line of hair products—appeared and offered to donate $5,000 to Alzheimer’s research, recalls Ruvo. Before the night was over, $35,000 had been raised.

That dinner turned out to be the beginning of Ruvo’s second career as a philanthropist. Today, he is the co-founder and chairman of Keep Memory Alive, the foundation that built and continues to support the Lou Ruvo Center for Brain Health, a facility in downtown Las Vegas that treats patients with brain disorders such as Alzheimer’s, Huntington’s, Parkinson’s, amyotrophic lateral sclerosis (ALS, or Lou Gehrig’s disease), and multiple sclerosis. Keep Memory Alive, which has raised more than $200 million, holds its annual Power of Love gala this April. (See sidebar.)

Early results from the Alzheimer’s research funded by Ruvo show that a drug used to treat cancer has promise in removing amyloid plaques from brain tissue. “Other than my children and family, this center is the single biggest achievement of my life,” says Ruvo. “What we’re doing in Las Vegas is changing the world.”

An only child, Ruvo grew up in a two-bedroom apartment not far from the restaurant. He adored his parents. His mother—who is 90 years old—was the soft touch, and his father was firm but loving. “My best friend in my life was absolutely my father,” says Ruvo. “My dad loved people. He was a remarkable listener. When I was a teenager, whenever one of my friends had a problem, they would come over and talk to him. My father listened. He absorbed.”

But in the early 1990s, Ruvo’s friends called him with alarming news. “They said: ‘There’s something wrong with Lou. He’s not remembering things like he used to.’”

Ruvo was surprised. He saw his father virtually every day and had not noticed the decline. “It was not until I played a game of poker with my father, who was an excellent card player, that I realized there was a serious problem,” he says. “I had beaten him at every hand, something I had never done before.”

At one point, Ruvo sat with his father in a doctor’s waiting room. “There was one person in a wheelchair, one in diapers, and one couldn’t keep his head up,” says Ruvo. “My father looked at me and asked: ‘Is this where I’m headed?’”

Witnessing his father’s decline and experiencing the heartbreak of caregiving left a deep impression on Ruvo, who, for this reason, ensured that the center’s programs were designed to respect the dignity of patients and their families. All support services for patients and caregivers are free. There are no waiting areas; instead, patients are shown immediately to examination rooms. Volunteers are trained by the Four Seasons. “I saw the toll that taking care of my father took on my mom: the constant worry, the sleep deprivation, and the lack of exercise. It’s an experience that changes your life,” he says. “Our caregiving program is second to none.”

Ruvo initially hired a local architect to design the center. But when he saw the plans, he realized they lacked a certain “sizzle” and would not attract the national attention and talent he believed the center needed. He then approached Frank Gehry about the idea. Gehry was adamantly opposed. “He said: ‘I don’t want to do a building in Las Vegas,’” Ruvo recalls of the contentious and profanity-laden meeting.

Eighteen months after breaking ground, Ruvo signed a deal with Toby Cosgrove, MD, the CEO of the Cleveland Clinic, to operate it. But Ruvo still needed a bright light to lead the center. He had his eye on Jeff Cummings, MD, who was at UCLA.

After Dr. Cummings signed on, other talented doctors followed. Today, the center is affiliated with some of the greatest minds in Alzheimer’s research.

“Larry is a true visionary who brought a dream to life,” says Dr. Cummings. “He has created a momentum that is carrying us forward to a new era of patient care and research.”

For his part, Ruvo knows his father would approve. “Even now that he’s gone, he’s still helping me,” he says. “I know it.” (www.keepmemoryalive.org)