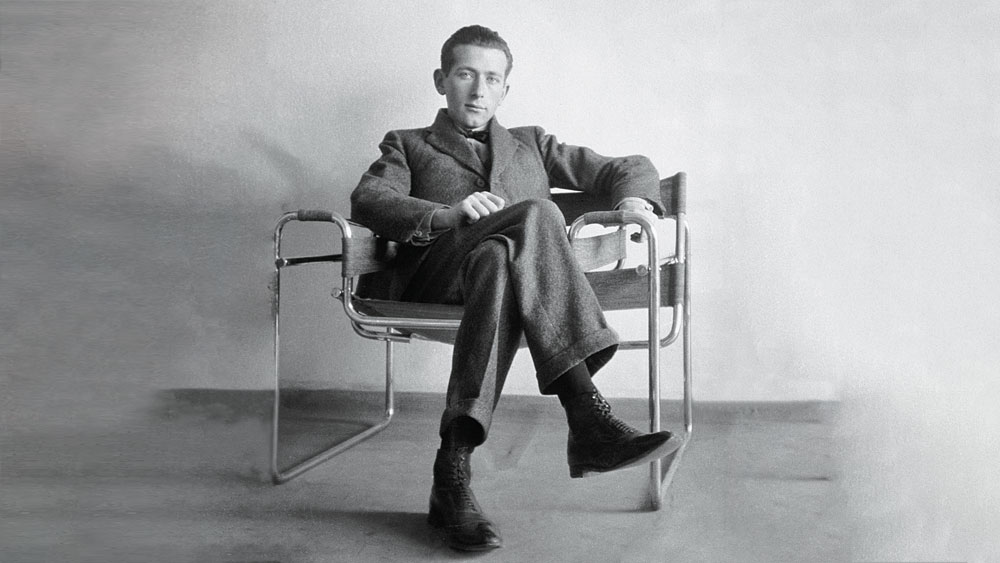 Classic designs are around for a reason. Why one piece becomes a sensation over another is always a matter of debate. In the case of Hungarian-born designer Marcel Breuer, his Wassily chair began as a quiet design experiment that went on to achieve cult status for nearly a century.

A student of the legendary Bauhaus school in Germany, Breuer was invited by Bauhaus founder Walter Gropius to direct the carpentry workshop in 1925. While his woodworking skills were impressive, the 23-year-old turned his attention to metal, inspired by the handlebars of his Adler bicycle. Riding around Dessau, outside of Berlin, the designer saw the potential of steel—its lightweight-yet-study character and malleable possibilities.

He envisioned tubular furniture made from steel and approached Adler with the concept. Failing to entice them, Breuer went straight to the source: steelworks manufacturer Mannesmann. The company had recently developed a process for making seamless steel tubing, which meant the material could be shaped, bent, and shaped again while retaining much of its strength. Breuer ordered the metal tubes directly, had them pre-bent (keeping those handlebars in mind), and hired a plumber to help him weld the frame together.

Ultimately it was the process of bending and shaping that informed Breuer’s concept. The designer has been quoted as saying, “I realized that the bending had to go further. It should only be bent with no points of welding so it could also be chromed in parts and put together.” After many moonlighting sessions, Breuer’s piece, named Mobile B3, debuted in 1926. It was made by Standard–Möbel of Berlin, and then, ironically, by Thonet—the bent wood furniture pioneer known for Michael Thonet’s legendary No. 14 model, a simple but revolutionary design that has been passionately adopted by every Parisian café since the early 20th century. Thonet ceased production during World War II.

Breuer outfitted his armchair with practical canvas slings. The chrome, banded piece became its own act of aesthetic rebellion. It was admired by Bauhaus art professor, painter, and friend Wassily Kandinsky, who requested his very own version of the prototype. After the war, Italian furniture maker Gavina Group produced the Mobile B3, making a few key alternations. They swapped out the canvas for black leather, infusing a little luxury to what was Breuer’s earnestly utilitarian creation. In 1928, he wrote, “this metal furniture is intended to be nothing but a necessary apparatus for contemporary life.”

Gavina Group also leveraged the chair’s much sexier lore, renaming it Wassily and perhaps giving the design world its first roadmap for successful product marketing. By 1968, Knoll acquired the Bologna-based Gavina Group along with the rights to product the chair.

The iconic brand has continued to manufacture authorized, licensed versions of the Wassily and other Breuer designs.

1919
The Bauhaus is founded in Weimar, Germany, by architect Walter Gropius, whose manifesto urges, “Together let us conceive and create a new building of the future.”

1925
The Bauhaus moves to Dessau, outside of Berlin. Along with Kandinsky, art teachers include Josef Albers, László Moholy-Nagy, Paul Klee, and Gunta Stölzl.

1926
The chair, called Model B3, is made by Standard-Möbel of Berlin and then by Thonet, which ceases production during World War II.

1928
Breuer designs his canti­levered Cesca chair. Gropius resigns his post as Bauhaus director, and Breuer leaves to take up independent practice, working at times with Gropius.

1932
The Dessau Bauhaus campus closes and reopens in Berlin under the direction of architect Ludwig Mies van der Rohe.

1933
The Bauhaus closes under pressure from the Nazi party, which brands the Bauhaus group as both Communist and intellectual.

1937
The Nazis’ Degenerate Art exhibition showcases work by many Bauhaus artists. Breuer follows Gropius to the States to teach at Harvard’s Graduate School of Design; Moholy-Nagy moves to Chicago to head the New Bauhaus.

1946
Breuer opens his own architectural firm in New York.

1966
Designed by Breuer in collaboration with Hamilton Smith, the original home of the Whitney Museum of American Art opens in Manhattan.